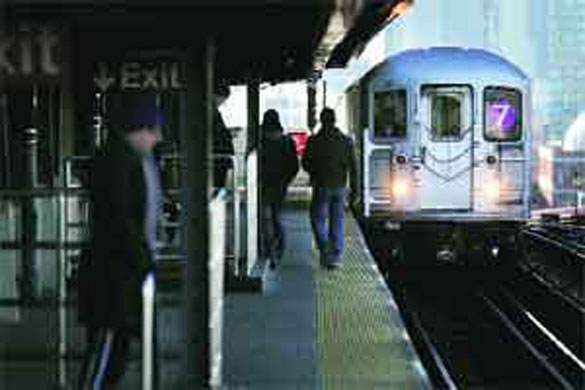 •  Another Rape Victim in Pakistan Being ‘Rapped’

A 31-year-old woman was arrested on Saturday and charged with second-degree murder as a hate crime in connection with the death of a man who was pushed onto the tracks of an elevated subway station in Queens and crushed by an oncoming train.

The woman, Erika Menendez, selected her victim because she believed him to be a Muslim or a Hindu, Richard A. Brown, the Queens district attorney, said.

“The defendant is accused of committing what is every subway commuter’s nightmare: Being suddenly and senselessly pushed into the path of an oncoming train,” Mr. Brown said in an interview.

In a statement, Mr. Brown quoted Ms. Menendez, “in sum and substance,” as having told the police: “I pushed a Muslim off the train tracks because I hate Hindus and Muslims ever since 2001 when they put down the twin towers I’ve been beating them up.” Ms. Menendez conflated the Muslim and Hindu faiths in her comments to the police and in her target for attack, officials said.

The victim, Sunando Sen, was born in India and, according to a roommate, was raised Hindu.

Mr. Sen “was allegedly shoved from behind and had no chance to defend himself,” Mr. Brown said. “Beyond that, the hateful remarks allegedly made by the defendant and which precipitated the defendant’s actions should never be tolerated by a civilized society.”

Mr. Brown said he had no information on the defendant’s criminal or mental history.

“It will be up to the court to determine if she is fit to stand trial,” he said.

Ms. Menendez is expected to be arraigned by Sunday morning. If convicted, she faces a maximum penalty of life in prison. By charging her with murder as a hate crime, the possible minimum sentence she faced would be extended to 20 years from 15 years, according to prosecutors.

On Saturday night, Ms. Menendez, wearing a dark blue hooded sweatshirt, was escorted from the 112th Precinct to a waiting car by three detectives. Greeted by camera flashes and dozens of reporters, she let out a loud, unintelligible moan. She did not respond to reporters’ questions.

The attack occurred around 8 p.m. on Thursday at the 40th Street-Lowery Street station in Sunnyside.

Mr. Sen, 46, was looking out over the tracks when a woman approached him from behind and shoved him onto the tracks, according to the police. Mr. Sen never saw her, the police said.

The woman fled the station, running down two flights of stairs and down the street.

By the next morning, a brief and grainy black-and-white video of the woman who the police said was behind the attack was being broadcast on news programs.

Patrol officers picked up Ms. Menendez early Saturday after someone who had seen the video on television spotted her on a Brooklyn street and called 911, said Paul J. Browne, the chief spokesman for the Police Department. She was taken to Queens and later placed in lineups, according to detectives. Police Commissioner Raymond W. Kelly said on Friday that, according to witnesses’ accounts, there had been no contact on the subway platform between the attacker and the victim before the shove.

The case was the second this month involving someone being pushed to death in a train station. In the first case, Ki-Suck Han, 58, of Elmhurst, Queens, died under the Q train at the 49th Street and Seventh Avenue station on Dec. 3. Naeem Davis, 30, was charged with second-degree murder in that case.

Mr. Sen, after years of saving money, had opened a small copying business on the Upper West Side this year.

Ar Suman, a Muslim, and one of three roommates who shared a small first-floor apartment with Mr. Sen in Elmhurst, said he and Mr. Sen often discussed religion.

Though they were of different faiths, Mr. Suman said, he admired the respect that Mr. Sen showed for those who saw the world differently than he did. Mr. Suman said he once asked Mr. Sen why he was not more active in his faith and it resulted in a long philosophical discussion.

“He was so gentle,” Mr. Suman said. “He said in this world a lot of people are dying, killing over religious things.”

Another Rape Victim in Pakistan Being ‘Rapped’

VEHARI - Four culprits kidnapped the mother-of-three and gang-raped her for three months.

The rapists were named as Tariq, Yousaf, Yaseen and Mushtaq who have been enjoying the Saddar police’s support, according to the brother of the victim. He threatened to commit suicide along with his family if the culprits were not arrested.

The brother Abdul Sattar told reporters that his sister Shareefan Bibi was married to Ali Sher, a resident of Kachi Paki Ludon. He said three months ago, his sister was returning after visiting her father when the four abducted her.

However, she managed escape in wretched condition believed to be bearing a baby. The family approached the Saddr police who refused earlier.

However, they booked the rapists on the court’s orders. Cop Akhter Chema was blamed for backing the beasts.

When contacted, Saddr SHO Malik Rashid said the tragedy did not take place in his jurisdiction so the case had been discharged and Abdul Sattar was advised for registering the case in police station concerned.

The aggrieved family appealed to Punjab CM, Punjab IG, RPO and DPO for the justice.

The number of such cases has surged in the country, setting alarms bells rings.

ISLAMABAD: Speakers at a seminar on Saturday stressed on adopting specific standard operating procedures (SOPs) during emergencies such as floods and earthquakes to help women, particularly those who are women, with the assistance of government agencies.

During a disastrous situation, women and children are most vulnerable and usually confront multiple problems, they said.

Rahnuma-Family Planning Association of Pakistan (FPAP), with the support of Research and Advocacy Fund (RAF), conducted a ‘National level Experience Sharing’ workshop at a local hotel.

Speakers said that Minimum Initial Service Package (MISP) has been developed which is related to basic, limited reproductive health facilities for use in an emergency.

They were of the view that if MISP is adopted as part of the SOPs of NDMA then whenever an emergency occurs, the government machinery will be prepared, stocked and trained to immediately respond to the needs of the most vulnerable group of the affected population – women and children.

MISP for reproductive health (RH) is a coordinated set of priority activities designed to mange the consequences of sexual violence, prevent excess neonatal and maternal morbidity and mortality, reduce HIV transmission and plan for comprehensive RH services in the early days and weeks of an emergency.

The main goal of MISP is to reduce mortality, morbidity and disability among populations affected by crises.

MISP includes a pre-packaged set of kits containing drugs and supplies aimed at facilitating the implementation of priority RH services in the early phase of a crisis. The UNFPA is in charge of assembling and delivering these RH kits. As logistical problems are common in crisis settings, agencies should prepare by including RH supplies within their overall medical supply procurement.

Rahnuma-FPAP, under this endeavour, has carried out extensive advocacy and lobbying campaign and reinvigorated strong linkages and partnership with stakeholders concerned at the national and provincial level.

It also organised a national level consultative workshop in Islamabad which was overwhelmingly participated by federal and provincial governments functionaries including parliamentarians, officials of PDMAs and NDMAs, line departments and ministries, members of INGOs, CSOs and print and electronic media.

A delegation of Japanese businesswomen concluded its six-day visit to Kingdom yesterday, under the leadership of Mariko Bando, president of Showa University for women in Japan.

This visit further cemented the growing bilateral relations between the two countries.

The delegation visited Dar Al-Hekma College for women yesterday and held talks with Vice Dean Saleha Abdein to enhance the cooperation between them and Showa University.

Consul General of Japan Jun Yoshida hosted a reception in honor of visiting Japanese delegation at his residence on Friday, which was attended by several women dignitaries from Saudi Arabia.

“The visit of Japanese women delegation to Saudi Arabia is an important step in moving further between two countries,” said Yoshida.

The visit is arranged by Japan External Trade Organization (JETRO), which is exploring the Saudi Arabian market for cosmetic products and women fashion.

Apart of traditional economic relations, both countries are cooperating in technical and educational fields. Japan is extending its expertise to Saudi Arabia in technical education to achieve the national goal of Saudization.

The Saudi Japanese Automobile High Institute is an icon in the field of technical education. A significant number of Saudis are graduating in Japan, where admission criteria for Saudi students are relaxed.

Any Saudi student who completed a two-year term in any university in the Kingdom can seek admission into Japanese universities.

CHINIOT - The Chaman Welfare Society and Public Welfare Society in collaboration with Insan Dost Trust and the UN Women Initiative organised a seminar on ‘Conflict Management and Violence against Women’ here the other day.

SIALKOT/NAROWAL - Two girl students were killed and 12 others sustained multiple injuries when a bus of a private college overturned after dashing against road divider due to speeding here on Kh Muhammad Safdar Road in cantt area early Saturday morning. While two youth were killed in road mishap in Narowal.

Reportedly, girl students of a local private college ‘Nisa College Sialkot’ were coming to the college on boarded a bus of the college stated to be old and overloaded with the students. Meanwhile, the bus rammed into a road divider due to speeding and low visibility.