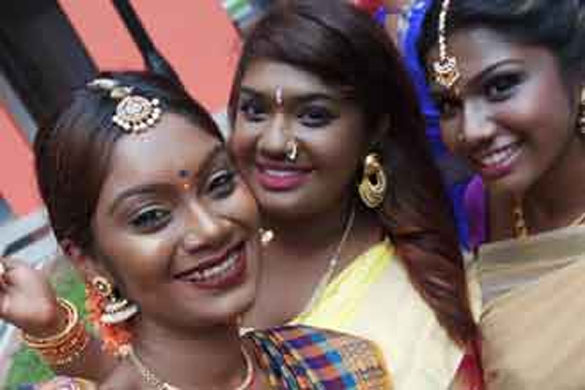 A brilliant new campaign to celebrate dark skin is being celebrated throughout the world.

#Unfairandlovely is the hashtag used as dark skinned women take to social media to share their selfies.

The campaign was launched by sisters, Mirusha and Yanusha Yogarajah, students at the University of Texas, after their friend Pax Jones took photos of them.

Mirusha told the Global Post,  “We decided to name the series Unfair and Lovely in order to address the hyphenated identities of people of colour in the West, and colourism in the black and brown communities.

“Pax asked us to take part after noticing that even many of the advocates/activists addressing racism in the black community who had a large following had light skin.

“We discussed it, and I noticed the same thing in the South Asian community — activists and advocates with a large audience against racism, sexism, fatphobia, etc., usually were lighter skinned. So this photo shoot occurred, and then we created a hashtag.”

As the hastag #unfairandlovely gathers momentum, women have shared their personal stories on social media alongside their selfies.

Suleikha Snyder ‎said, “I'm always told to stay out of the sun so I don't get "kalo." Screw that. I love all my browns. #unfairandlovely”

Anuja said, “On #unfairandlovely day, to the Aunty who said my fair skinned son was "lucky" to not look like me: SHUT IT!”

Dilpreet Kaur Gill said, “S/O to all the aunties who said if i was fairer id be prettier.#unfairandlovely”

Nyeshah said, “I wanted fair skin and blue eyes. I have indeed lightened up, skin tone wise. But I am at a point in my life where I have learned to embrace what I was born with and accept and love my culture.”

BAQUBA, Iraq: Twelve-year-old Iraqi Nejla Imad holds a white table tennis ball against her bat with her thumb, flicks it into the air and sends it bouncing over the net.

She does this with her left hand while sitting in a wheelchair: Imad, like tens of thousands of Iraqis, is a victim of the bombs that have terrorised the country for well over a decade.

A roadside bomb ripped into her family's car in Baquba, a city northeast of Baghdad, when she was just three years old, taking much of her right leg, part of her left and her right forearm.

Despite these injuries, she took up table tennis when she was four and is now a rising Paralympic star.

"Table tennis... has begun to change my life for the better," says Imad, who wears a green jersey with her country's flag on the front and "Iraq" written across the back.

"My self-confidence is increasing day after day," she says.

The kindness she has been shown has also helped her deal with the pain of her injuries.

"I see the people around me show sympathy to me, and their readiness to help me, especially when I am outside the house, and this is something important that greatly eased the physical and psychological pain after I became handicapped," Imad says.

Imad trains in Baquba three times a week and also journeys to Baghdad twice a week to practise with the national under-16 Paralympic team.

In Baquba, she practises with four other girls -- one who was paralysed by a mortar round and three who were disabled from birth -- in a sports centre with pictures of table tennis stars on the walls.

Her coach in Baquba, Hossam Hussein, says that Imad won medals in several local competitions, drawing the attention of the National Paralympic Committee, which invited her to join the Iraqi under-16 team.

"Nejla is one of the most skilled players on the table tennis team. She has great skills and great confidence in herself," says Hussein, predicting that Imad has a bright future ahead of her.

In 2015, Imad placed second in the Iraqi championships for disabled players under age 16, and also won silver at the Arab championships the same year.

Jassem Katib Mezal, the coach of the national team, says Imad will not feature at this year's Paralympics, but the young athlete hopes to do so later on.

"I hope to be with the Iraqi teams in future Olympic competitions," Imad says.

She lives in a small house on the outskirts of Baquba with her four sisters and two brothers, and is continuing her studies alongside her table tennis training.

Imad's mother says the many trips to Baghdad -- some 60 kilometres (37 miles) of checkpoints and traffic jams away -- are tiring, and the 100,000 Iraqi dinars (about $80) she receives per month for transport do not fully cover the expense.

"But I feel her happiness and I see her practising the sport, and this reduces all my troubles," says her mother, who asked not to be identified by name.

"We are proud of... Nejla and her teammates," says Samir al-Kurdi, the head of the Iraqi table tennis federation for the disabled.

Table tennis is a source of both motivation and pride for Imad as well.

"Practising the sport gives me a lot of mental motivation, and I have begun to feel proud," she says.

Two teenage girls have been arrested in France for plotting to carry out a terror attack against a concert venue in Paris.

The girls, aged 15 and 17, were arrested after discussing plans for the attack over Facebook messenger. The attack they discussed was similar to those that hit the French capital in November 2015 in which militants loyal to the Islamic State killed 130 people and wounded hundreds more. Of those killed, 90 lost their lives at the Bataclan theatre during a concert.

The girls were arrested on March 9 and formally charged two days later with “criminal conspiracy in connection with a terrorist undertaking” according to France24.

French prosecutors told media “neither weapons, nor explosive substances have been discovered” since the attack was in the early stages of planning.

81 French minors are so far known to have left for Syria, of which 51 are female.

KASUR: In-laws of a newly-wed woman allegedly shaved her head for not bringing the dowry according to their expectations at Mallahwala village on Saturday in the limits of Pattoki police station.

Iqra Bibi of Bonga Balocha village was married to Muhammad Riaz some 20 days back.

According to Iqra, soon after the marriage her in-laws, particularly her mother-in-law Rani Bibi started taunting her over not bringing costly items in dowry and even subjected her to torture.

On Saturday, her in-laws allegedly tied Iqra’s hands and legs with ropes and shaved her head. Later they expelled her from their house.

Police are looking into the matter.

A young man and woman was mysteriously killed by unknown gunmen in northern Faryab province of Afghanistan with the local officials hinting at honor killing over alleged adultery.

The incident took place in the early hours of Sunday morning in Yengi Qala village in the restive Khwajah Sabs Posh district.

The district administrative chief Abdullah Masoomi said an investigation has been launched into the incident involving murder of a married man and a married woman.

He said the couple could possibly have been murdered by their relatives and with the support of the Taliban militants after they were accused of adultery.

Masoomi further added that an investiation is underway to find out the main motive behind the mysterious murder of the young couple and no suspect has been arrested so far.

Faryab is among the relatively volatile provinces in northern Afghanistan where the anti-government armed militants are actively operating in a number of its districts.

Women are often targeted by family members and murdered for honor over offenses, including seeking violence and alleged adultery.

There is very little accurate data on the number of honor killings since they are rarely reported despite major gains and achievements in women’s rights in the country in the last decade, including constitutional guarantees on non-discrimination, the enactment of the Elimination of Violence Against Women (EVAW) law criminalizing harmful traditional practices.

ISLAMABAD: Pakistan's Senate on Friday passed a bill that criminalises for the first time sexual assault against minors, child pornography and trafficking.

The amendment to the penal code, which will go into force after being ratified by the president, also raises the age of criminal responsibility from seven to 10 years of age.

Under the revised legislation, sexual assaults will now be punishable by up to seven years in prison. Previously, only rape was criminalised.

Likewise, child pornography, which was previously not mentioned in the law, will be be punishable by seven years in prison and a fine of 700,000 rupees ($7000).

Pakistan last August was rocked by a major paedophilia scandal when it was revealed that hundreds of pornographic videos of children from the village of Hussain Khanwala in Punjab province had been created and were being circulated.

About 20 arrests were made, but only the acts of rape and sodomy were punishable by law.

The new amendment also criminalises child trafficking within Pakistan. Previously traffickers were only liable for punishment if they removed children from the country.

"This is a very important step to realise the obligations of Pakistan" under the Convention on the Rights of the Child, Sara Coleman, chief of child protection at UNICEF, told AFP.

"Now we have to turn our attention to the law's implementation," said Valerie Khan, the director of Group Development Pakistan, a local NGO which advocates legal reforms.

She also called for the "establishment of a national commission on child rights, which is essential to monitor and coordinate the implementation of the law."

LAHORE: Religious scholars belonging to all schools of thought on Saturday declared that the Punjab Protection of Women against Violence Act 2016 was not un-Islamic but suggested steps to improve its strength as per Islamic injunctions.

They were attending a briefing on the law arranged to remove misconceptions about it. Khwaja Hassaan was in the chair and the briefing was given by Mr Salman Sufi, Senior Member SMU (Law and Order) Chief Minister’s Office.

Maulana Tahir Ashrafi, Mufti Qavi and Dr Raghib Naeemi, who were among the participants, suggested that a unit comprising religious scholars in Punjab should assist the government in improving the act. Mr Sufi assured them that the needful would be done.

Sahibzada Zahid Mahmood Qasmi, a member of the Islamic Ideology Council, said the statement of the council chairman about the act should not be considered as its (the council’s) viewpoint.

Mr Sufi clarified that the condition to make husbands wear a GPS tracked ankle bracelet to monitor their movement was not applicable in cases of domestic violence. It was applicable only in cases of grave violence like attempt to rape, murder or throw acid and intimidating a victim to withdraw a case (where the court believes that the life of the victim is at risk).

Regarding the misconception that the husband will be asked to leave the house for 48 hours and this will cause further rift, Mr Sufi clarified that 48 hours was only the maximum limit and this time apart was only to serve as a “cool off” period. This period could also be of a couple of hours, depending on the recommendation of the District Women Protection Committee.

Thirdly regarding the misconception that husbands, brothers and others male family members will not be allowed to question female family members, Mr Sufi clarified that the act had no such provision. A father, husband questioning his daughter, wife didn’t constitute as psychological violence.

Mr Sufi clarified that the act was not anti-men, rather the word man, father, husband or son were not even used once. Instead the bill used “aggressor” or “defendant” which included both male and female. He also clarified that the claim that the bill will destroy marriages and make private matters public was unfounded as the mediation was the first priority in cases where grave violence had not been committed. Furthermore, the Distinct Women Protection Committee will maintain strict confidentiality.