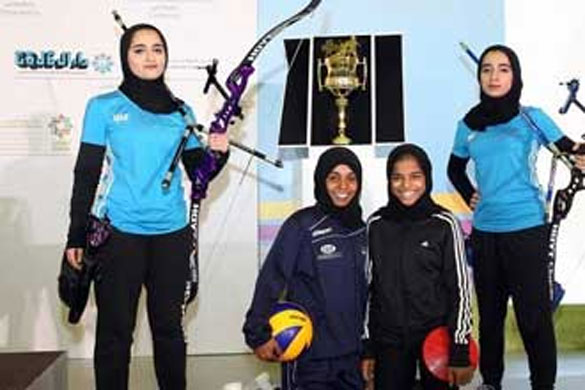 Photo: Some of the Sharjah Ladies Club athletes who will be taking part.(Supplied photo)

LONDON: UK Prime Minister David Cameron has backed a ban on face-covering veils such as burqas in schools, courts and at border check points in the country but said he will not go as far as what France did by imposing a blanket ban.

"When you're coming into contact with an institution, or you're in court, or if you need to be able to see someone's face at the border, then I will always back the authority and institution that have put in place proper and sensible rules," Cameron said.

It comes as the UK prepare to announce a series of measures designed to stop British Muslims becoming radicalised and traveling to the Middle East to join terrorist groups like the Islamic State of Iraq and the Levant (Isil).

"What does matter is if, for instance, a school has a uniform policy, sensitively put in place and all the rest of it, and people want to flout that uniform policy, often for reasons that aren't connected to religion, you should always come down on the side of the school," he was quoted as saying by the BBC Radio Four.

Cameron, 49, however, rejected the idea of a blanket ban on burqas and other religious headgear, along the lines of the ban imposed in France since 2010.

Cameron's comments came on the day he unveiled plans for tougher new English language requirements to prevent segregation of members of the Muslim community.

New rules will mean that from October this year migrants coming to the UK on a five-year spousal visa with poor or no English skills will have to take a test after two and a half years to show they are making efforts to improve their English.

France introduced a controversial ban on wearing the full face veil in public in 2010, triggering concerns from rights groups.

The opening ceremony is scheduled for a 6pm start, after which the tournament will begin with show jumping.

55 clubs from 15 countries will take part in the Arab Women Sports Tournament (AWST) from February 2-12 at the Sharjah Equestrian and Racing Club.

The tournament is being held under the patronage of Shaikha Jawaher bint Mohammed Al Qasimi and will feature eight competitions in basketball, volleyball, table tennis, fencing, archery, shooting and athletics, with show jumping added for the first time this year.

After the New Years migrant sex attacks, a leading German feminist has said the politically correct “bubble has burst” and Germans should speak out against Islamism. She claimed Cologne police have been covering up Muslim rape for 20 years, and said that sexual violence was now being used as a weapon of war in Germany.

By in large, the feminist reaction to the migrant sex attacks has been to either play down the problem or deflect attention on to a non-existent “western rape culture”.

As Breitbart London reported shortly after the attacks, a local feminist group in Cologne held a protest in support of further mass migration, and a British feminist publication tried to justify abandoning female victims because the male Muslim attackers were “oppressed”.

Alice Schwarzer (pictured left, next to German Chancellor Angela Merkel), is a veteran “second wave” feminist who rose to prominence before feminism became preoccupied with apologising for Islamism and misogynistic Muslim culture.

She has previously called for a ban on the wearing of the Islamic headscarf in schools or other public settings, and warned of a creeping Islamisation of Europe, which in her opinion would lead to an erosion of human rights, especially women’s rights.

She told Die Welt in an interview yesterday that her Cologne based magazine Emma.de has been one of the only voices speaking out for women in Germany over the past 25 years.

“Since then, I have in certain circles been cheerfully reviled as a racist by multicultural, Greens, Leftists and converts”, she said, explaining that she has faced “enormous intimidation” for speaking out.

“Entire books have been published against me to try to shut me up. But in my case, it has not succeeded.”

She also made a startling revelation, which appeared to suggest that Germany police have been covering up the scale of migrant and Muslim rape for more that two decades.

“20 years ago, a Cologne police officer said to me: ‘Alice, 70 to 80 percent of all rapes in Cologne go to the account of Turks.’ I was shocked and replied: ‘You absolutely must make it public! Even a Turk is not born as a rapist. There must be causes. What’s going on here? What can we do?’

“But the message was clear: ‘No way, that’s not politically opportune’. And it is this kind of political correctness that conceals the circumstances,” she said.

She also said that there are in fact many people in Germany who, like her, feel, “critical about the development of so many migrants and refugees in Germany and their failure to integrate”. She said such people “fear the racism accusation”, but after Cologne, “This bubble has now burst”.

She argued that the “grotesque” contradictions in modern feminist discourse, namely the tendency to excuse Muslim violence against women, was in fact a form of racism. She insisted that feminists should not “patronise” Muslims by apologising for their intolerance and crimes.

“Political correctness should not prevent us from free thinking,” she said, “Because it’s not about people, but about ideology.”

“You should tell [migrants]: ‘You have the same rights – but also the same obligations!’ After the events in Cologne I keep reading the so-called young feminists arguing that, ‘rape is German problem also.’

“That’s right, we feminist pioneers have been saying this for 40 years!” But, she said, the migrant rape phenomenon clearly is of “a new quality, a completely different dimension” to lesser sexual violence committed by native German men.

She also argued that, “the headscarf has nothing to do with faith. It is a political signal,” claiming that, “Islamists offer parents money when their daughters wear veils” and reaffirmed her call for the garment to be banned in public institutions.

She also argued that the mass rapes on New Year’s Eve were a form of “war strategy”. She said:

“In all the wars the systematic rape of women is part of the war strategy. Because sexual violence against women reaches two people. First: Man breaks the women. Secondly, to humiliate their husbands. That would be really a controversial political dimension: Kalashnikovs, explosives belt and now sexual violence”.

She also explained that, “We have long known that a strong surplus of boys, not yet men, between 18 and 30 can be very tricky. This can even be triggering of war.

“China has pulled the emergency brake at 117 to 100 women, and the one-child policy changed. Sweden has now, thanks to the refugees, 125 to 100. And in Germany it will be similar at 70 to 80 percent of young men among the refugees. This surplus of men is a threat, regardless of cultural background”, she said.

A man who cut off his wife's nose in being hunted by police and the Taliban in Afghanistan, officials said.

Reza Gul lost a significant amount of blood after she was mutilated by her husband Mohammad Khan, 25, in the Taliban controlled, northern Faryab province. Relatives took her to a nearby hospital.

Khan then fled, according to The Afghanistan Independent Human Rights Commission which circulated the 20-year-old's picture on social media. Branding the incident a "disgrace" they also called for the government to arrest him.

It was not immediately clear why Mr Khan attacked the mother-of-one, but Ms Gul reportedly told the Commission that her husband had routinely beat her.

In some parts of Afghanistan, slicing off a person's nose is meant to shame them and show they have brought disgrace to their family or clan.

A spokesman for the governor of Faryab province said she would need reconstructive surgery and arrangements are being made to transfer her to Turkey.

Khan had returned from Iran just three months ago, Fawzia Salimi, a hospital director in Maymana, capital of Faryab province told The Associated Press, adding that community elders and Taliban representatives had tried mediating with the family to help them sort out their problems.

But this traditional method of dealing with family issues had failed, she added.

Taliban spokesman Zabiullah Mujahid said that the group's gunmen were "seriously searching the area to find" Mr Khan. If and when he was found, "then he will be dealt with according to Sharia law," Mujahid said, referring to the Islamic legal system.

"Gul's village is under Taliban control... but the police are trying to chase her husband," Police chief Sayed Aqa Andarabi told the Agence France Presse.

The photograph of Ms Gul sparked outrage on social media.

Afghan woman Reza Gul lies on a bed with her baby. (AFP Photo)

Kabul-based women's rights activist Alema said: "Such a brutal and barbaric act should be strongly condemned. Such incidents would not happen if the government judicial system severely punished attacks on women."

Maria Reha, another prominent women's rights activist, wrote a sarcastic message on her Facebook page after the picture of Reza Gul circulated online.

She wrote: "We are the most proud and brave nation on earth?! If you doubt it, here is another example of our bravery! Don't worry, soon America or Europe will make her another nose and Afghanistan will win another trophy for this pride!"

Afghanistan is thought to have one of the highest rates of domestic violence in the world, although most incidents are not reported to officials. However, Recent attacks have sparked street demonstrations and online protests.

A 2010 Time magazine front cover picture of a mutilated woman caught the attention of the world.

Bibi Aisha, had her nose cut off by her abusive husband in southern Uruzgan province. Eventually she moved to the US and was given a prosthetic nose.