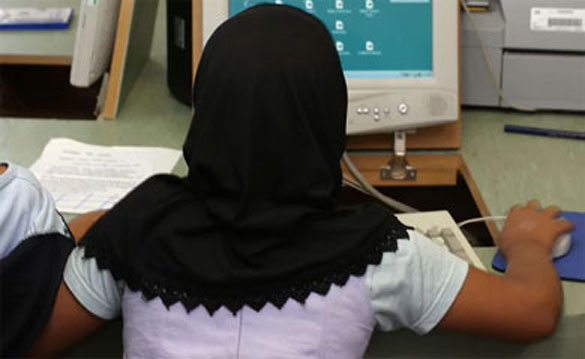 •  ‘Teacher Pulls off Muslim Student's Hijab in US

School inspectors in England have been told to question Muslim primary school girls if they are wearing a Hijab or similar headscarf, the head of Ofsted has announced.

Amanda Spielman, the head of Ofsted and chief inspector of schools, said the move was to tackle situations in which wearing a Hijab “could be interpreted as sexualisation” of girls as young as four or five, when most Islamic teaching requires headdress for girls only at the onset of puberty.

The announcement – in the form of a recommendation to Ofsted inspectors rather than an update to the inspectorate’s official handbook – follows a meeting last week between Spielman and campaigners against the Hijab in schools, including Amina Lone, co-director of the Social Action and Research Foundation.

“While respecting parents’ choice to bring up their children according to their cultural norms, creating an environment where primary school children are expected to wear the hijab could be interpreted as sexualisation of young girls,” Spielman said.

“In seeking to address these concerns, and in line with our current practice in terms of assessing whether the school promotes equality for their children, inspectors will talk to girls who wear such garments to ascertain why they do so in the school.

“We would urge any parent or member of the public who has a concern about fundamentalist groups influencing school policy, or breaching equality law to make a complaint to the school. If schools do not act on these complaints they can be made to Ofsted directly.”

The announcement is the latest of a string of requirements issued in the wake of the “Trojan horse” affair that erupted in Birmingham in 2014, which provoked controversy over fears of Islamist influence in state schools.

Since then both the Department for Education and Ofsted have required schools to teach and reflect fundamental British values. Ofsted inspectors have highlighted a number of schools, including some Christian, Islamic and Jewish faith schools, over concerns.

Recently Al-Hijrah school, a state Islamic faith school in Birmingham, was the subject of a long legal battle after being classed as inadequate by Ofsted for maintaining strict segregation between boys and girls.

In 2014 an Ofsted inspection of an Islamic faith primary school was derailed after parents complained that inspectors had quizzed pupils as young as nine about their attitudes towards homosexuality.

The Muslim Council of Britain secretary-general, Harun Khan, responded to the move saying: “It is deeply worrying that Ofsted has announced it will be specifically targeting and quizzing young Muslim girls who choose to wear the headscarf.

“It sends a clear message to all British women who adopt this that they are second-class citizens, that while they are free to wear the headscarf, the establishment would prefer that they do not,” he said.

“The many British Muslims who choose to wear the headscarf have done extremely well in education and are breaking glass ceilings. It is disappointing that this is becoming policy without even engaging with a diverse set of mainstream Muslim voices on the topic,” he added.

‘Teacher pulls off Muslim student's hijab in US

A Muslim girl student has alleged that her hijab was pulled off by a school teacher in the US state of Virginia, according to a media report.

The teacher pulled off the girl's hijab while she was talking with her friends at the Lake Braddock High School, Virginia, the Washington Post reported.

"So my hijab was ripped off my head today," the girl tweeted. "Then he says 'Oh your hair is so pretty' and tries to play it off like it’s a joke," she said.

After the incident, she ran into a restroom and called her parents. They contacted the school and a mosque.

The teacher, who was not identified, told other teachers he thought the student was wearing a hoodie over the hijab. He reached to pull off the hoodie and the hijab came off, he was quoted as saying by the paper.

The incident prompted an outrage from a Muslim advocacy group and others. The school also condemned the incident.

The minister did not share the identity of the women.

As per the new Haj policy, women above 45 years of age can apply to go on Haj without a mehram. The recommendation was made by a committee constituted by the minority ministry earlier this year to streamline the country’s Haj policy.

However, the recommendation has drawn flak from a number of prominent Muslim clerics and organisations who called it “un-Islamic” and “against the Sharia”.

However, the government went ahead to accept the recommendation and made it part of the new Haj policy.

BAMYAN, Afghanistan: Nasrin Hassily is busy discussing a classroom project with her friend Nusrat, in a cafe that she visits almost daily after university to hang out with friends.

She is not alone. The Bamyan Women Cafe provides a space for females in a male-dominated society.

“Away from prying eyes and attention, I feel quite comfortable in the café,” 21-year-old Hassily, a student at Bamyan University, told Arab News.

Originally from Balkh province, she came to Bamyan to study “because this place is more secure than other places in Afghanistan.”

The first-of-its-kind cafe in the country was established four years ago with support from German NGO Help.

“We established this cafe for women to feel free, calm and relaxed away from their home,” Manager Aziza Mohmmadi told Arab News.

“In a normal restaurant, women always have to watch what they say and wear, and how they behave. But here they can be themselves,” she said.

“We allow girls to bring their male friends if they want, and discuss whatever they want over a cup of tea. Women need this kind of space if you want Afghan society to move ahead.”

Located in the middle of Bamyan city, the cafe opens at 10 a.m. and closes at 5 p.m. It is abuzz with girls and women from different walks of life socializing, studying, reading or eating.

Fariha Sadat, a 22-year-old handicraft entrepreneur, said it is an ideal place to discuss business with her partner and clients.

She moved to Bamyan a few months ago to expand her business, and feels that “the atmosphere here is safe for women.”

She told Arab News: “I’m very happy to be here. You don’t have to fear suicide attacks or bomb blasts like you do in Kabul.”

Sadat added: “The cafe gives you the kind of space you don’t get anywhere else, even at home. I come here for business dealings, discussing plans and arranging meetings.”

But “to come to this oasis of peace in Afghanistan, we have to pass through so many Taliban-dominated areas on our way from Kabul, and that makes us very insecure.”

Hassily said: “In the last 15 years, women have made great progress. But the atmosphere in Afghanistan is so uncertain and insecure that you never know when the country will be taken over by the Taliban. This is the biggest fear women have.”

She won the award in “Campaign For Action" category.

Farhat Asif is the founder and president of Institute of Peace and Diplomatic Studies.

The N-Peace Award and Network supports the leadership and capacity of women and men to prevent and resolve conflicts, and serve as active agents for reconstruction and peace building across conflict-affected countries in Asia; Myanmar, Pakistan, Nepal, Sri Lanka, Indonesia, Afghanistan and the Philippines.

This award recognizes individuals who have worked at the policy and decision-making levels to advance the Women, Peace, and Security (WPS) Agenda, specifically at the sub-national levels.

"One woman and one man across all N-Peace countries are recognized under this award.  The Award Committee recognizes her efforts to implement the Women, Peace and Security agenda, especially on the work she undertakes touching on sensitive cross-border issues."

Besides academic research and training, Farhat focuses on playing a leading role in developing a multi-sectoral approach to further the WPS agenda as stated in the UN1325. “Through her efforts, she established Center for Women Peace and Security Pakistan,” it said.

At the Institute, Farhat has established Emerging Young Women Leaders Congress,  which provide support to the young women leaders with vision a platform to interact with the mentor women to develop projects on issues related to women peace and development, it said.

“Farhat has fifteen years of work experience in the social development sector.  Being a young woman belonging from a marginalized region of Kashmir, Farhat has fourteen years of experience of excellence working in academic, research and development sector as a researcher, analyst, writer, publisher, media planner and diplomatic relations professional,” the statement said.

Farhat is at present completing her PhD from School of Politics and International Relations, Quaid-I-Azam University, Islamabad with research focus on Public Diplomacy.

Farhat is federal member of Women Regional Network, Aman-o-Nisa: Pakistan Women’s Coalition Against Extremism and is Pakistan’s representative of “Sisters Against Violent Extremism (SAVE), a project by Women Without Borders.

She has also been invited by Ambassador Swanee Hunt at the Institute for Inclusive Security as one of 12 influential Pakistani women leaders.

Tahereh Mohammad, the young Sunni woman, has been appointed as the head of Chal Talepak village in the border town of Jargalan in North Khorasan province, a Farsi report by ISNA said on Sunday.

At least 90 women have been appointed by the Iranian government as heads of villages in the same province but this is the first time that a woman from the minority Sunni population of Iran is being appointed as a village head.

Meanwhile, in a decree on Saturday, Governor of North Khorasan province, Mohammad Reza Salehi, appointed Zeinab Jahan Mata’a as the governor of Shirvan town, which is unprecedented in the history of the province.

The Deputy Governor of North Khorasan for Political Affairs, Mehrdad Ebrahimi, said the City and Village Council officials in the province are appointed in line with the government of President Hassan Rouhani’s slogans which are focused on taking advantages of the capacities of young generations including women based on fair criteria.