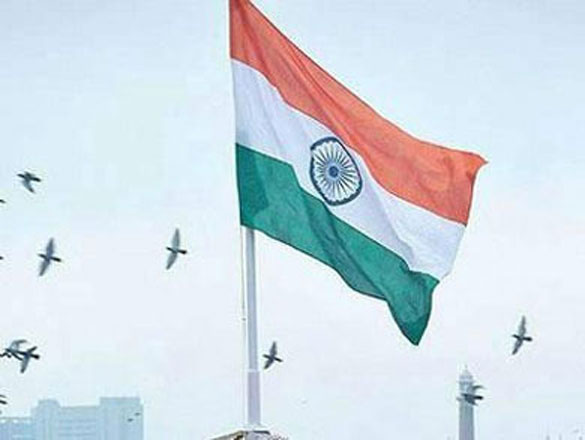 The police, however taking the matter seriously and has given ultimatum to all people that if they try to oppoose national flag hoisting in the school on Republic Day then they will have to face serious consequences.

DANKAUR (Greater Noida): Tension erupted in Greater Noida's Dankaur after some extremists opposed flag hoisting and modern education in a muslim girls school on Monday. The school is recognized and registered with minority welfare department of UP since October 2011. On Monday some people from school authority went to the school to install iron rod to fix the flag but miscreants hackled the labour and asked to leave the place. Acting on the issue, the police and administration has swung into action.

The police called some locals to Dankaur police station and they in front of the cops had agitated on giving education of other languages in school. The police, however taking the matter seriously and has given ultimatum to all people that if they try to oppose national flag hoisting in the school on Republic Day then they will have to face serious consequences.

Dankaur police station officer Chakrapani Sharma said that nobody will be allowed to take law in their hand. "Some uneducated persons were opposing flag hoisting ceremony. We have informed our seniors about the incident and to avoid any untoward incident on Tuesday amidst heavy force flag hoisting ceremony will take place in the school. These extremists were also raising questions over teaching Hindi and English. After Republic Day, we will call them and ensure teaching of modern education in the school," Sharma said.

"Saiyyad Bhureshah muslim girl school is running on waqf committee land. Since 2011, education till 5th class is offered to the children. Initially everything was going well but tension cropped up when we decided to offer Hindi and English teaching to the students. We would like to run this school on the line of Centre's scheme of modernization of madarsas' but some extremists are creating trouble," said adir Khan Jayaswal, secretary of the Hazrat Syed Bhureshah Committee.

"Now situation has gone from bad to worse. Teachers have stopped visiting the school and situation is created so that education could not be offered in the school. We had given complaint to the UP chief minister, UP governor, GB Nagar district magistrate, GB Nagar senior superintendent of police and local Dankaur police station about the incident. Despite the fact, some local extremists are mounting pressure on us to withdraw modern education," he added.

"On Monday we have again filed complaint with district magistrate office and GB Nagar SSP to ensure flag hoisting ceremony and provide force to avoid any untoward incident," he further said.

JEDDAH: The workforce nationalization program in the Kingdom has revealed the injustices faced by female graduates from engineering colleges in finding suitable jobs as more than 90 percent of them are being forced to work in administrative positions.

Engineers working in the sector told a local publication that a number of obstacles prevent female graduates from working in the field, mainly the lack of suitable work environment for them. Other obstacles are the weak education outputs of some colleges, and the differing departments responsible for supervising the engineering specialty at some schools.

They noted that only 10 percent of the total number of engineering offices employ female graduates.

Areej Ghandora, the former head of Female Engineers Committee at the Saudi Council of Engineers (SCE), said that the weak output of education in Saudi universities for girls has pushed many female engineers to work in the administrative positions, in addition to the problems associated with the general nature of the conservative Saudi society which makes it difficult for women to work in the field.

Husain Al-Mushait, chairman of the Engineering Offices Committee, said that most female graduates work in administrative jobs under the job title of "drawing and designing".

He also noted that the number of female graduates from the engineering colleges does not exceed 2,000 annually. "Less than 10 universities here in the Kingdom provide engineering specialty for women. Additionally, the number of Saudi female engineers registered at the Saudi Council of Engineers amounts to only 260."

A recent report by the Ministry of Labor revealed that 52 percent of the female national workforce is employed in the building and construction sector, in administrative and clerical jobs, and about 17 percent work in sales. Other dominant professions included management, scientific and technical jobs, services, industrial, chemical, and food processing operations.

CHARSADDA: Actress Veena Malik along with her husband and son paid a visit to Bacha Khan University here on Monday to express share grief and express solidarity with the fellow students of the victims and faculty members.

Bacha Khan University came under deadly attack a few days ago in which 21 people, including students, a professor and guards were martyred.

Speaking on the occasion, Veena Malik said her family is equally grieved and shares the sorrow of the bereaved families of the victims. She said Pak Army will crush the enemies of the country.

“Education is the best revenge,” she told the students.

Veena Malik had written a song to pay homage to the martyred students and others. She and her husband also sang it before the media persons.

USALEM: A Jerusalem hospital says an Israeli woman has died of the wounds she suffered in a Palestinian stabbing attack in a West Bank settlement the day before.

Police spokeswoman Luba Samri says Kriegman was wounded when two Palestinians went on a stabbing rampage outside a minimarket in Beit Horon on Monday. Another Israeli woman was moderately wounded before a security guard fatally shot both assailants.

Samri identified the attackers as Ibrahim Allan and Hussein Abu Gosh, both in their 20s.

Kriegman is the latest casualty in four months of Palestinian attacks that have claimed 26 people on the Israeli side. At least 149 Palestinians have been killed by Israeli fire, including 104 said by Israel to be attackers.

KARACHI: Over 100 suspected persons were detained as police launched overnight crackdown against criminal elements in Korangi and Landhi area of Karachi.

According to the police, during door-to-door search operation in Landhi and Korangi areas, over 100 suspects including four women were taken into custody. The accused are being investigated.

On the other hand, on a tip-off, the law enforcement agencies arrested two accused belong to two different political parties in Baldia town and Malir Halt area.

RIYADH: An Asian housemaid jumped out of a bedroom window to land on an air conditioning unit. She threatened to throw herself down from there but was caught by the Civil Defense, newspapers reported Sunday.

Residents saw the maid perched on the air conditioning unit on the sixth floor and threatening to jump down. They called the Civil Defense and police, who went to the building in the capital Riyadh and tried to persuade her to go back into her room.

The papers said Civil Defense officers managed to reach the maid and pull her into the apartment, adding that police detained her for interrogation.

In October, a 55-year-old Indian housemaid jumped out of the third-floor window of a house in Riyadh. Her fall was cushioned by the building's electricity box, but she was badly injured and her right hand had to be amputated during emergency surgery in hospital.