The Fragility of Syrian Refugee Women In Turkey 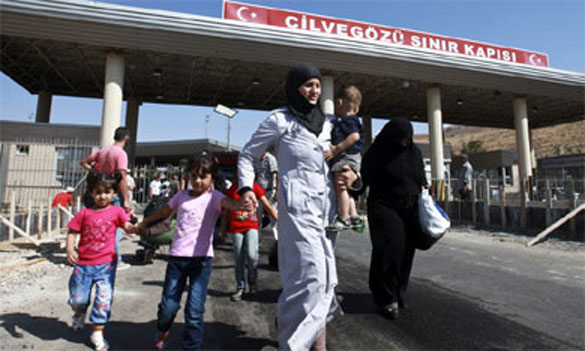 Refugees who took refuge in Turkey, escaping the war in Syria, October 2014 - kafeinkolik/Shutterstock

•  Talaq on Phone and Social Media, FIR against Husband

The Fragility of Syrian Refugee Women In Turkey

Rima, whose name has been changed for security reasons, is a young Syrian woman. Until five years ago, she was living in Syria with her family. One day, a bomb dropped on their house, killing her husband and three brothers. After this unexpected tragedy, Rima, mother of three, left her hometown for Turkey. In November 2013, she started a new life with her kids in a refugee camp in the Turkish border town of Sanliurfa, one of the oldest Syrian refugee camps in Turkey.

This was the beginning of new traumas. She accompanied her brother’s pregnant wife to the state hospital in Viransehir, a district of Urfa. There she was raped by a security guard and an interpreter. The attackers blackmailed her with videos and photographs. Rima was terrified, so she kept silent. In the following days the rape went on, and the number of attackers raised to seven. As a result of gang-rape, Rima was hospitalised for losing significant amounts of blood and taken to the intensive care unit. Luckily, she recovered. Now there is an ongoing investigation by Viransehir’s Public Prosecutor’s Office. Rima was brave enough to go to the Turkish police later. But not every Syrian refugee woman is.

The June 2018 report “Needs Assessment of Syrian Women and Girls Under Temporary Protection Status in Turkey” by United Nations (UN) Women Turkey emphasises that Syrian refugee women are poorly informed about their rights to protection and the legal support services available to them. The same report shows that 73% of Syrian women are unaware of where to seek assistance related to violence or harassment.

According to official statistics, by December 2018 more than 3,6 million registered Syrian refugees are living in Turkey. 45,7% of them are female and half of this female population is under the age of 18. Refugee girls and women, who are more vulnerable to exploitation, are subjected to all forms of violence in their daily lives. On the other hand, services for Syrian refugees in Turkey are largely gender-blind, leaving many problems unsolved.

“I can’t recall a single Syrian refugee woman I have met who didn’t report violence. Marital rape is also very common, but many Syrian women don’t even define these experiences as abuse. They don’t even know that marital rape is a crime that will be punished”, says lawyer Gokce Yazar, a member of the Sanliurfa Bar Association Refugee Rights Commission.

Polygamous marriages, outlawed in Turkey – unlike Syria, are not only present among the Syrian community in Turkey. It is not a secret that Turkish men, mostly in rural areas, are also illegally “marrying” Syrian women as their second or third wives.

There are even websites promoting Syrian women for Turkish men. One of these websites, called “Syrian Women”, features several sexist stereotypes such as “What Syrian women want”. One of the sections on this so-called “marriage website” reads as follows:

“There are many Syrian refugees in Turkey. In every city you can bump into a Syrian. Syrian women are fragile just like our women. Since Syrian women do not set a condition for legal marriage, you can live with them without marrying them".

In addition to marriage cases, forced prostitution is another fundamental problem. Some Syrian women often become sex workers after escaping domestic violence. Some of them are forced into sex work by their partners. Others are exploited by gangs of human traffickers on the way.

“In Viransehir, Syrian women are forced into prostitution just to get some milk or diaper for their babies”, says lawyer Yazar, adding that the Sanliurfa Bar Association is still receiving such complaints.

The complex surgery was conducted at a specialist hospital in Khobar, eastern Saudi Arabia.

Al-Ghamdi was quoted by local press saying the surgery was successful and that the patient was discharged from hospital in good health and without any complications.

She also praised the capabilities of Saudi hospitals and the expertise, medical instruments and modern endoscopes that enable them to operate on these levels of complex surgeries.

He said the organising committee should respect the fatwa.

“I call upon every district officer in Sabah as the organising chairman of the district-level Kaamatan fest celebration not to allow it,” he said.

Talaq on Phone and Social Media, FIR against Husband

VARANASI: A woman lodged an FIR against her husband and in-laws on Saturday after her husband gave her talaq through phone and social media, in Bilariaganj area of Uttar Pradesh's Azamgarh district.

The woman, who got married in 2005, alleged in her complaint that her husband living in Saudi Arabia gave talaq through phone and WhatsApp message and also made some objectionable photos viral on social media for not fulfilling dowry demand. She is currently living with her parents.

When she objected to talaq over phone her father-in-law took a print out of the message and sent it to her through someone.

She alleged that her in-laws started demanding dowry for sending her husband to Saudi Arabia just after her marriage. The woman's parents managed Rs two lakh but her in-laws continued to demand more dowry and started torturing her.

The police said that three people, including the woman's husband, have been booked under sections of Dowry Prohibition Act, Muslim Women (Protection of Rights on Divorce) Act and IT Act.

IPPF works in over 170 countries to provide help, advice, services and supplies relating to any aspect of sexual, reproductive health and Family Planning. The honour was bestowed on her in the IPPF Governing Body elections 2018. In IPPF ranks she is also an elected Chairperson for its South Asia Region Executive Committee (Region comprises of 9 Countries of the south Asia), she is also Chairperson of Rahnuma-Family Planning Association of Pakistan (R-FPAP). Mahtab has previously served as President of Rahnuma-FPAP for two consecutive terms.

Mahtab is a committed human rights defender, one of her greatest achievements is to bring all women parliamentarians together to work for women’s rights over and above their political party affiliations. It was the result of these efforts that the Child Marriage Restraint Act was revised in Sindh Assembly and age of marriage for girls was raised to 18. She is highly respected for her bold stances in the face of opposition for the welfare of the women of this land.

In her latest global leadership position Mahtab plans to bring the South Asia perspective and concerns to the global forum.Ms. MahtabAkberRashdi has remained a prominent figure in Pakistan through her various accomplishments. Her spontaneous laugh and intelligence made her an instant celebrity at a very young age when she appeared on Pakistan Television as a talk show host in early eighties.She has served at many prestigious positions in Government of Sindh during her career as a civil servant since 1988. She has the honor of being the first woman secretary in the history of the Sindh Secretariat, where she served as Secretary Culture & Tourism, Youth Affairs & Sports, Secretary Social Welfare and Women Development, Secretary Education, Secretary Information and Secretary Inter Provincial Coordination. After her retirement she joined politics and became Member Sindh Assembly in the last tenure of Sindh government.

The Burn Prevention Research Center reported that between 10 – 15 percent of burns in Iran are recorded as self-immolation of women.

On the National Burn Prevention Day, on December 22, 2018, Mohammad Javad Fatemi, head of the Burn Prevention Research Center, said, "About 10 to 15 percent of burned patients are often women who have attempted self-immolation."

Fatemi said the conditions of burn treatment are chaotic, adding, "In fact, there are 1,350 beds for the burned in the country of which less than 20 are compatible with the standards. This is while in 2015 it was estimated that we need 2,400 hospital beds. The number of intensive care units for burned patients is about one third of the country's need."

Burning has become very common in Iran and the people in Iran are burned eight times greater than the global average. Probably, the statistics are even higher, because many burns are not registered in Iran. Annually, around 30,000 people in Iran suffer from severe burns leading to hospitalization, of which 3,000 die. (The state-run ILNA news agency – December 22, 2018)

Unfortunately, Iran is among the highest ranks of burn outbreaks in the world. The high incidence of burns in Iran is caused by the absence of prevention systems in all areas, including the mismanagement of government officials.

The average cost of burn treatment is $28,000, and given the poverty and deprivation of the vast majority of the Iranian society, it is natural that self-immolations and burns often result in death.