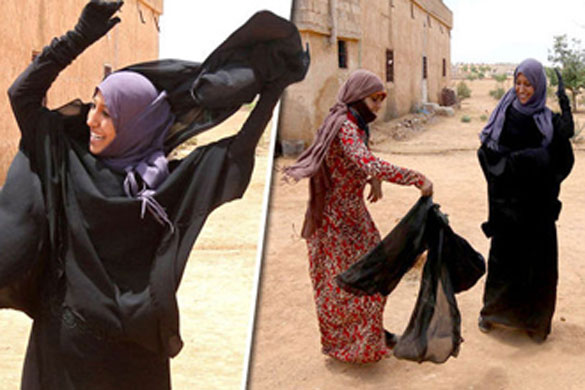 Photo: A woman in a Niqab stands in her village after Syria Democratic Forces (SDF) took control of it.

•  Women Are the “Glue” That Holds Online Terrorist Networks Together

WOMEN in northern Syrian have been celebrating their new found freedom from oppressive Islamic State (ISIS) rule by ditching their Niqab - a strict dress code imposed by the jihadi group.

Pictures taken in Aleppo province, close to the border with Turkey, show a woman removing the traditional Islamic dress, which covers the face but leaves the area around the eyes clear.

ISIS has imposed strict dress codes for those living under the group's brutal rule, including forcing women to wear full-length black garments that cover the arms, legs and face.

Clearly elated, the woman takes off the veil she was wearing in her village on the outskirts of Manbij after Syria Democratic Forces (SDF) took control of it.

The SDF cut off the last route into the besieged town of Manbij after more than a week of advances.

US-backed fighters launched an offensive last month to retake the Manbij pocket and areas in northern Syria along Turkey's border which have been under ISIS control for almost two years.

The Syrian Observatory for Human Rights (SOHR) monitoring group said the SDF, which is backed by US air support and special forces, took control of the last route into Manbij on Friday.

In other frontlines in northern Syria, Russian and Syrian jets stepped up their relentless aerial bombing of their positions in the northern city of Aleppo.

Further south, government troops and their allies, backed by Russia, captured a crossroads in Raqqa province that controls a highway leading to Tabqa, an ISIS-held city on the Euphrates River, and Raqqa city itself, the Observatory and the army said.

Auckland {Syed Mujeeb}: The Islamic Women’s Council of New Zealand passes our condolences to the family and friends of the victims of the Orlando shooting. We condemn this act of hate and violence. As the Qur’an reminds us, killing one person is the equivalent of killing humanity.

We note that the perpetrator of this horrendous crime had a history of family violence and was known to the authorities. This fact highlights the importance of community connection and cohesion, support and rehabilitation for perpetrators and the need to invest in activities that bring communities together to support vulnerable and at risk people.

Our organisation will continue to work on strengthening the community and working towards a more peaceful and just society.

The government considers it women’s rights to provide them with opportunities for social, political and economic activities and will stand by them using all its power, said President Rouhani at a breaking-fast meal ceremony with women and family activists.

"Today, a great mission of the Iranian women is presenting a socially-active model of Muslim women and Iranian women can do this perfectly," said the President late on Monday.

He added: "Today, women should participate more in the development process of the country and advancing the policies of Resistive Economy," stressing that economic development of a country is not possible without women’s help.

Appreciating women for participating actively in the last presidential and the latest parliamentary elections, he said: "Women of our society will continue along their path to stand up for their rights".

"Our women are contributing to further development of the society and despite what some narrow-minded people think, women are not problems of the society," continued Dr Rouhani.

Slamming ideas that women should either play their role as mothers or participate in the society, he said: "We have no such ideas in Islam; in Islam, women and men are equal in playing roles".

He also referred to one of his promises during his presidential campaign and said: "one of my promises was moderation and one of the meanings of moderation is social justice among men and women of our society".

"What we have in Islam is meritocracy and to reach this, there is not difference between men and women," continued President Rouhani.

Women are the “glue” that holds online terrorist networks together

In the male-dominated world of ISIL, it may make sense to ignore the role of women in recruitment and spreading extremist propaganda.

But, according to a new study, this tendency to assume women play a minor role is wrong. While there are far more men operating in terrorist networks than women, researchers analyzing pro-ISIL users on social media suggest women are far more important.

Stefan Wuchty, lead researcher and associate professor at the University of Miami, describes women disseminating pro-ISIL content as “the glue that holds the network together.”

In the study, published in Science Advances, Wuchty and a team researchers analyzed pro-ISIL content on VKontakte, a Russia-based social media site with over 360 million users. Whereas Twitter and Facebook shut down such content almost immediately, VKontakte does so more sporadically, making it more suitable for the research.

To find the data they were looking for, researchers searched through multiple hashtags to select relevant group pages that explicitly expressed support for the terrorist group by posting its propaganda. Once they found these pages, researchers were able to extract the individual members of these groups. In the end, they obtained information on nearly 42,000 individuals, about 40% of whom were women.

Researchers then mapped the social connections between these individuals, looking at their so-called “betweenness centrality.” This is an indicator of how “central” an individual is in their social network. For example, if someone has 100 Facebook friends online and each of these friends is in different social circles, such as a sports club or a reading group, then that person’s betweenness centrality is high because this one individual is connecting different groups of friends that would normally not interact with each other.

The study found that, on average, women had a higher betweenness centrality than men. So, why is this important?

“People with high between centrality are important for knowledge dissemination,” Wuchty says. In short, women are playing a more central role in spreading extremist propaganda, bringing people together, and channeling funds.

And, this isn’t necessarily restricted to the web. A yearlong investigation by Britain’s Channel 4 revealed a secret cell of British Muslim women playing a particularly important role in recruiting others to join the so-called Islamic State through invite-only meetings in back rooms.

While the researchers admit the study has its limitations, as pro-ISIL content on Vkontakte isn’t representative of the group’s propaganda machine, they do hope their findings raise questions about the role of women in the development of an extremist network.