•  Muslim Women Do Not Feel Secure In Britain: Report

•  Life on the Frontlines with the Peshmerga's Female Fighters 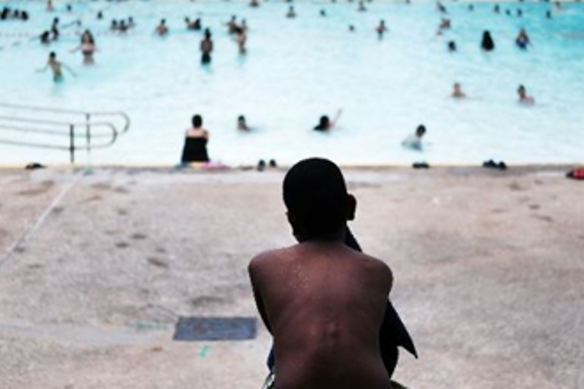 GENEVA (Switzerland) — A Muslim father was fined in Switzerland on Wednesday (June 29) for refusing to allow his daughters to take swimming lessons at school, in the latest case exposing the challenges of integration in the Alpine country.

He had also refused to allow his daughters to go to camps and other school events, insisting they ran counter to his religious beliefs.

The Altstaetten district court in the northeastern Swiss canton of St. Gallen found the father guilty of among other things violating the law on obligatory schooling and of disobeying previous orders by the authorities, ATS reported.

The court reached its verdict after the father appealed a previous ruling faulting him last December.

The prosecutor had requested that the man be sentenced to four months behind bars, in addition to a fine, maintaining that the Bosnian national who has been living in Switzerland since 1990 had resisted integration and had no respect for Swiss legislation.

The family has reportedly been in conflict with the local authorities for years.

Last year, the parents were sentenced by a lower court for refusing to allow their daughters go to school unless they were permitted to wear an Islamic veil.

But the country’s highest court overturned that verdict, ruling that the eldest girl should be allowed to wear the veil to school in the name of freedom of religion.

Last month, the norther Swiss canton of Basel country reversed one middle school’s controversial decision to grant exemptions for two Muslim pupils unwilling to shake hands with teachers of the opposite sex, and threatened hefty fines for those who refused to toe the line.

Muslim women do not feel secure in Britain: Report

One in five British Muslim women do not feel secure living in Britain, according to Tell MAMA, a London-based group monitoring anti-Muslim incidents that released its 2015 annual report on Wednesday.

The monitoring group has released statistics on anti-Muslim incidents reported to Tell MAMA, and to police forces as well, in the UK in 2015.

“We documented 437 anti-Muslim crimes or incidents that are classified as 'offline', meaning they happened in-person between a victim (or property) and a perpetrator," said the report. “Our 437 incidents represent a 200 per cent increase over the previous reporting period.”

The group, which was established in 2012, has emphasized in its findings that Muslim women were “disproportionately affected” by hate crimes.

According to the reports, almost 19 percent of British Muslim women, i.e. one in five, said they have felt “insecure in Britain”.

The group said the anti-Muslim abuse and attacks relied on the misrepresentation of Muslims in Britain from “certain media sources, politicians and public figures”.

Meanwhile, various reports have also indicated an increase in instances of hostility towards Muslims and immigrants in the U.K. since the referendum vote to leave the EU.

The Muslim Council of Britain has announced that it had compiled “over 100 incidents reported of hate crimes following the referendum result”.

The Leave campaign has been blamed for putting “xenophobic” rhetoric at the center of their argument for Brexit.

National Police Chiefs’ Council announced Monday that following the Brexit vote, “there has been an of increase [sic] in reporting to True Vision [an online site that receives hate crime reports] since Friday compared to this time last month.”

“With the backdrop of the Brexit vote and the spike in racist incidents that seems to be emerging, the government should be under no illusions: things could quickly become extremely unpleasant for Britain’s minorities,” chair of Tell MAMA and former Labour justice minister, Shahid Malik, warned in the report.

Muslim expectant mothers receiving treatment at public hospitals are concerned about their aurat (modesty), and not just during childbirth, a gynecologist at a public hospital said.

According to the public hospital gynecologist, Muslim women also requested to use "birthing pants" during check-ups, so they could cover their aurat as much as possible.

It is generally accepted that Muslim women can only show their face and hands to members of the opposite gender they are not related to.

A record number of women terror suspects were arrested in Britain in 2015/16, official figures have revealed.

A total of 36 females were held as part of counter-terrorism investigations in the 12 months to the end of March - the highest number in any financial year on record.

Rising numbers of youngsters are also being detained, with under-18s the only age group to see a rise in the number of arrests year-on-year - increasing from eight to 14.

Overall, there were 255 terrorism-related arrests in 2015/16, a decrease of 15 per cent compared to the previous year when there were a record 301.

A Home Office report accompanying the data said: “Although a fall on the previous year, the number of arrests in the year ending 31 March 2016 was still higher than most other recent years.”

Since the year ending March 2011, around the time of the Arab Spring, there has been a “general upward trend” in the number of arrests for terrorism-related offences, the paper said.

Security services have been on high alert since the emergence of Islamic State in 2014. Britain’s official terror threat level for international terrorism currently stands at severe - indicating that an attack is seen as “highly likely”.

Earlier this year it was revealed that police and intelligence agencies have disrupted seven plots to attack the UK in the previous 18 months.

The 36 female suspects held means they accounted for one in seven arrests over the period.

This was one more than the previous year and the number follows a steady increase since 2010/11, when it stood at 10.

All but two of the females arrested in the most recent year were considered to have links to international-related terrorism, the Home Office report said.

The number of under-18s detained was at the joint highest level for a financial year since records started. All but one of those in the youngest age group were considered to have links to international-related terrorism.

The statistics appear to chime with fears of increasing numbers of women and teenagers being drawn into extremism.

Schoolgirls and young families are among those feared to have fled the UK to join Islamic State. By contrast the number of 18 to 20-year-olds arrested more than halved, from 44 to 20.

Arrests in the international and “domestic” categories both fell, down from 217 to 212 and from 32 to 10 respectively, while the Northern Ireland-related tally was up from three to six.

Arrests of those from Asian ethnic groups, which made up more than half (55 per cent) of all arrests in the year ending in March, remained relatively stable, the report said.

Over three quarters of those held were British or had British dual nationality. A third of the arrests - 86 - resulted in a charge, with 76 of those individuals charged with terrorism-related offences.

The figures showed 97 people (38 per cent) were released without charge, 64 - or one in four - were bailed to return, while eight faced alternative action.

Life on the Frontlines With the Peshmerga's Female Fighters

Late last year, Captain Khatoon Ali Krdr, 36, the commander of an all-female Kurdish peshmerga unit, visited a family in the village of Kocho in northern Iraqi Kurdistan to see a woman who’d had nearly everything taken away by the Islamic State (ISIS). Like Khatoon, the woman and her surviving family members are Yezidis, an ethno-religious Kurdish minority group. ISIS has long enslaved, tortured, and killed, Yezidi women. Khatoon tried to speak to the woman, but she could not answer. These days, she is mute and can only stare ahead.

The woman’s family members told Khatoon that, while the woman was in captivity, ISIS members forbade her to breastfeed her newborn son. So, the child cried. Irritated by the infant’s wailing, one of the captors snatched him from his mother’s arms and silenced him by cutting off his head. Then, ISIS members lit a fire for roasting.

During a recent visit to a peshmerga army base located near Dohuk, on the Iraqi Kurdistan border with Syria and Turkey, I spoke to Khatoon about why she joined the peshmerga. From the base’s dusty parking lot, one can look into the desert expanses of all three countries and even spot the main pipeline that carries Iraqi oil through Turkey. The base serves as a training facility for the Hezi Roj, or Sun Force unit, whose 126 Yezidi soldiers range in age from 20 to late-30s.