• First Ever Miss Universe UAE to Be Held In Dubai; Finalists Announced

• Women Will Be At Helm of Youth League in Coming Years, Says IUML 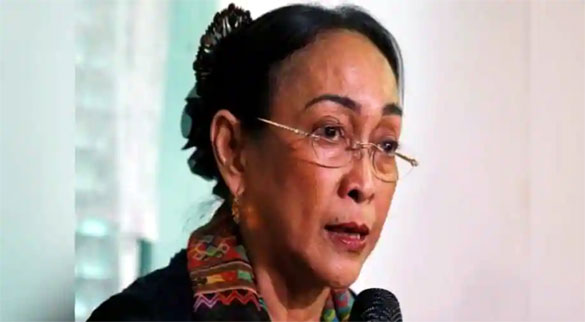 Jakarta, Indonesia: Sukmawati Sukarnoputri, the daughter of Indonesia's former President Sukarno, will undergo the ritual of converting from Islam to Hinduism on 26 October, CNN Indonesia reported.

According to the report on Saturday, a ritual ceremony will be held at the Sukarno Centre Heritage Area in Bale Agung Singaraja, Buleleng Regency, Bali, on Tuesday.

In 2018, hardline Islamic groups filed a blasphemy complaint against Sukmawati Sukarnoputri, accusing her of reciting a poem insulting Islam.

According to The Sydney Morning Herald, the daughter of Indonesia's former President had apologised.

Islam is the largest religion in Indonesia. The Southeast Asian nation has probably the largest Muslim population in the world.

First Ever Miss Universe UAE to Be Held In Dubai; Finalists Announced 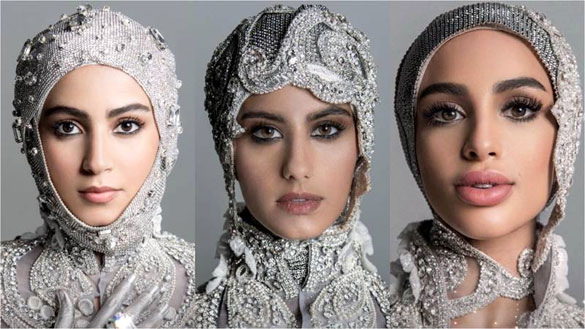 The countdown to the first ever Miss Universe UAE is hastening and among those hoping to make history are three Emirati models who are among the 25 hopefuls that have been revealed so far for the contest.

A total of 30 names will be announced before the main event, to be held on November 7 in Dubai at an as-yet undisclosed location.

The eventual winner will go on to represent the Emirates in the global Miss Universe contest which will be held in December in Eilat, Israel

Models Ameera Alawadhi, Marwa Al Hashemi and Reem Birdette will join other UAE resident for a chance to make history and become the first representative from the country at the pageant, now in its 70th year. It will be held in December in Eilat, Israel.

The finalists so far have been unveiled on Twitter by the Miss Universe UAE organization, who have said the inaugural contests will show the importance of inclusion.

"I’m shaking. I am so excited to announce that I’m one of the first Emirati women to make it to the Top 30 of the first-ever Miss Universe UAE.”

"I really want to use this platform and opportunity to redefine what 'beauty' should mean to us as women, and especially to represent Khaleeji women. My mission is to show the world what we really have to offer, and that we do not ever have to hide."

The entry for the pageant was not limited to only UAE citizens, but also residents in the country.

Entry for the pageant was open to all female residents between the ages of 18 and 28 who have lived in the UAE for more than three years.

On October 15, the thousands of applicants were shortlisted to 300 contestants following an audition in Dubai.

Following the audition, 30 contestants will make it to the Sunday, November 7 event. There, the number will be cut down to the top 15 contestants, who will then be cut down to only five. For the top five, there will be a question and answer round, and then the top three will be announced, followed by the crowning of the winner.

Women Will Be At Helm Of Youth League In Coming Years, Says IUML

Briefing reporters after the election of new office-bearers of MYL here on Saturday, Salam said the IUML had decided to give 20% reservation for all feeder organisations. But the present committee was constituted as per the Membership given two years ago. That is why there are no women office-bearers in the committee now. MYL has started giving membership to women and they will be in the leadership after two years, Salam said. Panakkad Syed Munavvar Ali Shihad Thangal and PK Firos have been elected again as state president and general secretary respectively. Senior vice-president in the outgoing committee Najeeb Kanthapuram, MLA, was omitted from the committee as he has crossed the stipulated age.

But Thangal has been given an exception as far as age is concerned because he is from the Panakkad family, Salam said. Ismail P Wayanad has been elected the new treasurer. Mujeeb Kaderi, Ashraf Edaneer, K A Mahin and Faizal Bafaqi Thangal are the new vice-presidents. C K Muhammadali, Naseer Kariyad, Jishan Kozhikode and Gafoor Kolkkalathil are the secretaries.

The number of office-bearers has been brought down from 17 to 11. But a six-member secretariat has been constituted mainly to accommodate those who have been left out. Asked about the exclusion of former MSF national leader T P Ashraf Ali, who had supported the former leaders of Haritha in the controversy involving state MSF leaders, Salam said there are many eligible persons who could not find a place in the new committee.

Panakkad Syed Munavvar Ali Shihad Thangal and P K Firos have been elected again as state president and general secretary respectively. Senior vice-president in the outgoing committee MLA Najeeb Kanthapuram was omitted from the committee as he has crossed the stipulated age

LONDON: The husband of UK charity worker Nazanin Zaghari-Ratcliffe, who has been detained more than five years in Iran, has gone on a hunger strike again after a court decided she has to spend another year in prison.

Richard Ratcliffe started his fast on Sunday outside the British government’s Foreign Office in central London.

He plans to maintain a “constant vigil” by sleeping in a tent outside the building’s main entrance in an effort to pressure Prime Minister Boris Johnson to secure the release of his wife and other detained dual British-Iranian nationals, Amnesty International said.

Zaghari-Ratcliffe served five years in prison after being taken into custody at Tehran’s airport in April 2016 and convicted of plotting the overthrow of Iran’s government, a charge that she, her supporters and rights groups deny.

In May, she was sentenced to an additional year in prison on charges of spreading “propaganda against the system” for having participated in a protest outside the Iranian Embassy in London in 2009 — a decision upheld this month by an appeals court. The verdict includes a one-year travel ban, meaning she wouldn’t be able to leave Iran until 2023.

Ratcliffe went on a 15-day hunger strike two years ago outside the Iranian Embassy, a move he credits with getting their 7-year-old daughter Gabriella released.

“We are now giving the UK government the same treatment. In truth, I never expected to have to do a hunger strike twice. It is not a normal act,” Ratcliffe said on his change.org petition.

He said Iran remains the “primary abuser” in Nazanin’s case, but the “UK is also letting us down.”

“It is increasingly clear that Nazanin’s case could have been solved many months ago – but for other diplomatic agendas. The PM needs to take responsibility for that.”

Zaghari-Ratcliffe was employed by the Thomson Reuters Foundation, the charitable arm of the news agency, and was arrested as she was returning home to Britain after visiting family. Rights groups accuse Iran of holding dual-nationals as bargaining chips for money or influence in negotiations with the West, something Tehran denies.

BERLIN: A German convert to Islam was sentenced to 10 years in prison Monday on charges that, as a member of the extremist Islamic State group in Iraq, she allowed a 5-year-old Yazidi girl she and her husband kept as a slave to die of thirst in the hot sun.

The Higher Regional Court in Munich convicted the 30-year-old, identified only as Jennifer W. in line with privacy rules, of — among other things — membership of a terrorist organization abroad, aiding and abetting attempted murder, attempted war crimes and crimes against humanity, German news agency dpa reported.

Federal prosecutors had accused the woman, from Lohne in Lower Saxony, of standing by in Iraq as her then-husband chained the young Yazidi girl in a courtyard and left her to die of thirst.

The child was “defenseless and helplessly exposed to the situation,” judge Joachim Baier said on Monday, adding that W. “had to reckon from the beginning that the child, who was tied up in the heat of the sun, was in danger of dying”.

However, she had done nothing to help the girl — although this had been “possible and reasonable” for her, Baier said, according to dpa. W. grew up as a Protestant but converted to Islam in 2013.

German media reported that she made her way to Iraq through Turkey and Syria in 2014 to join the IS. In 2015, as a member of the extremist group’s “morality police,” she patrolled parks in Fallujah and Mosul, armed with an assault rifle and a pistol as well as an explosive vest and looking for women who did not conform with its strict codes of behavior and dress, prosecutors said.

She was taken into custody while trying to renew her identity papers at the German embassy in Ankara in 2016, and deported back to Germany.

President Recep Tayyip Erdoğan reiterated on Saturday that Turkey is determined to fight violence against women within the framework prepared earlier this year.

Erdoğan made the remarks while meeting women from different backgrounds during his visit to the central Eskişehir province. He said all institutions are working resolutely to combat violence, and that a road map and comprehensive action plan on the issue was prepared in June.

Violence Prevention and Monitoring Centers (ŞÖNIM) have been established in all the 81 provinces of Turkey, Erdoğan said.

"These centers play an important role. We took one more step to strengthen this structure and established contact points for 372 social service centers of our Family and Social Services Ministry. These contact points will work in conjunction with ŞÖNIMs, allowing us to address this issue more widely," he said.

"We are determined to fight violence against women to the end."

Meeting businesswomen, Erdoğan said he attaches a great deal of importance to female entrepreneurs and entrepreneurship in general.

"When we exclude especially women from our development cause, we throw away half of our potential. However, every effort, every idea, every person means a lot to us. With this understanding, we have given and continue to give the greatest support in our history to female entrepreneurs," the president said.

"We are pleased to see that our female entrepreneurs are much more successful than men in some fields. Hopefully, we will build a strong and great Turkey together," he added.

In July, the government unveiled a fourth national action plan targeting “violence towards women” that mostly focuses on domestic violence.

The action plan has been drafted by the Ministry of Family and Social Services in coordination with agencies working on the prevention of violence. It includes five main goals and dozens of activities that will be accomplished in five years. Turkey unveiled its first comprehensive action plan on the issue in 2007. For the new plan, the government consulted with nongovernmental organizations (NGOs), labor unions, international organizations, universities and media.

The plan, under the principle of “zero tolerance” toward violence, aims to respond to all types of violence – from physical violence to emotional abuse. Details are not clear yet, but it included facilitating access to legal services for victims, drafting comprehensive policies on the issue and better coordination between government agencies for a faster response to cases.