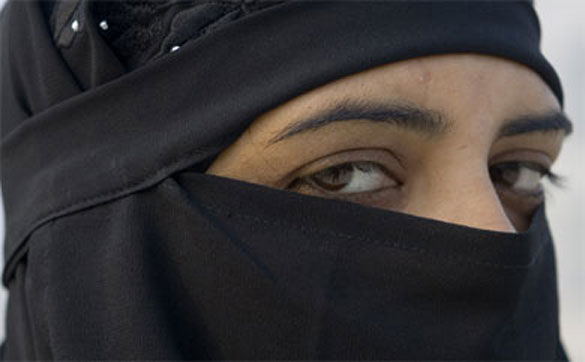 Given the reaction of some parts of the media, one could be forgiven for assuming that Europe and the rest of the Western world has become besieged by burqa-clad women. The “fear” is now so rife that empty bus seats in Norway recently were mistaken for a group of women wearing the burqa.

Meanwhile, in a much derided stunt in Australia, far right leader Pauline Hanson wore a full-face covering burqa into the senate chamber. Hanson’s aim was to prohibit Muslim women from covering their faces and to get the burqa banned in the country.

To look at it, the burqa is simply a veil which covers the body and face – and yet it is also sometimes associated with oppression, terrorism, and extreme religious beliefs. Some burqas only have a mesh screen for the wearer to see through. The niqab, on the other hand, is a face veil worn with a headscarf which leaves the eyes uncovered, while the hijab is a scarf which covers the head and neck. In Europe, the term “burqa” is used to refer to women who wear robes to cover the body and face, but their eyes may be left uncovered, as seen in the main image of this article.

Putting aside the contradiction between laws dictating what women can and cannot wear, human rights issues, and the history of women struggling to have the right to choose their own clothing, the number of Muslim women who wear the burqa alone does not necessitate this fear, nor any expense and time in creating new laws to ban the burqa.

The passion to ban the burqa is likely linked to the idea that all Muslims are synonymous with terrorism. This is evidently not the case, but the burqa bans –when coupled with the overestimation of the number of Muslims across Europe – create a sense of being able to curtail the numbers of Muslims, and terror, by controlling what women wear.

In 2011, France became the first European country to ban the burqa. At the time of legislation in 2011, there were 4.7m Muslims in France, making up 7.4% of the population. As of July 2016, Muslims now account for 7.2% of the French population. Legislative documents supporting the ban reported that 1,900 Muslim women wore the face covering burqa in the country in 2011. This number represented 0.04% of the French Muslim population, and less than 0.003% of the general population of France.

However, the 1,900 figure is reportedly a significant over-inflation of the initial figures released by the French secret service, who were charged with collecting this data. It originally found that only 367 women wore the burqa. This represents an even lower percentage of the population: 0.01% of the French Muslim population, and 0.00058% of the general population.

It is almost inconceivable that so much time, effort and cost would be spent bringing in a law that only affected 367 people in a country of over 63m.

The low number of women wearing the burqa in France reflects wider European estimates of Muslim women who cover their faces, where figures are either correspondingly low, or so low as to be impossible to record.

Since the ruling in France, other European countries have followed suit. Belgium also introduced a ban in 2011, which was implemented without any available estimates of how many Muslim women wear the burqa, as the figures were too “marginal”.

The Netherlands approved a partial burqa ban in certain public spaces such as hospitals and schools in 2016. State broadcaster NOS reported the total number of Muslim women that this affects ranges from 100-500, most of whom only occasionally wore it. This equates to 0.01-0.05% of the Muslim population in The Netherlands, and less than 0.003% of the Dutch population – regardless of whether the higher or lower estimate is used.

Bulgaria is home to one of the largest and oldest Muslim communities in Europe, who make up about 12% of the population. Prior to the national ban in 2016, towns had begun to ban it locally, starting with Pazardzhik, which implemented the ban due to the presence of 12 women who wore the burqa, or 0.01% of the town’s population.

In Austria, legislation banning the burqa comes in to force from October 2017. There are thought to be up to 150 women who practice the full face cover, making up 0.03% of the Muslim population, and, again, less than 0.002% of the population.

Studies show that 70% of Muslim women do not cover their hair at all in Germany which has a Muslim population of 5%. Yet despite this, and with no data on burqa wearers, it is following the Netherlands with plans to implement a partial burqa ban.

In the UK, there are no available numbers on how many women wear the burqa but the figures are likely to correspond to the low, virtually immeasurable European figures. Regardless, just as across Europe, there is strong public support for similar legislation: a YouGov survey conducted in 2016 revealed that 57% of the UK population would support a ban. For now, however, there do not appear to be any legislative plans to ban the burqa in Britain.

It is highly questionable whether the microscopic figures of women who wear the burqa has warranted the inordinate amount of focus, time and cost that has been put into scrutinising it. Fears surrounding the burqa are unfounded and based on perceptions of it posing a threat, despite no evidence of this.

Forcing women to not wear the burqa is no different to the Taliban forcing women to wear it: it removes all control from the woman over her body, and is just part of the sexist narrative controlling women’s dress in public places.

Islamabad-Elimination of discrimination against women constitutes a top priority of the government to ensure that they have their rightful place in the society, said the State Minister for Law and Justice.

Zafarullah Khan, who is also the Special Assistant to the Prime Minister on Law and Justice, met with UK Special Representative for Gender Equality, Ms. Joanna Roper, on Wednesday at the Ministry of Law and Justice.

They discussed on the issue of women’s empowerment in Pakistan. Talking to the representative, Zafarullah stressed that women in Pakistan play a pivotal role in the development and prosperity of the country. He highlighted that the reserved seats for women representatives in the National Assembly, have contributed to the political empowerment of women.

Zafarullah Khan also threw a light on the issue of honour killing in the country. He said that the government was committed to eliminating this inhuman practise against women.

In this regard, the government has passed anti-honour killings and anti-rape bills. The bill guarantees a prison sentence of 25 years to the perpetrators of honour killing and also strips families of the right to legally pardon the perpetrators, a practice that has allowed the murderers to walk free.

“We have also criminalised early and forced marriages”, added the minister.

The state minister further said that Pakistan and the UK enjoy deep-rooted relations, based on shared history, experiences, and their emphasis on equality.

“This relationship between two countries not only serves our national interests but also contributes to stability in our region and beyond. Pakistan considers UK a close ally and wishes to keep the strong relations intact”

UK Special envoy Joanna Roper appreciated the SAPM for his commitment to protect the human rights and promote gender equality.

In the court case seeking to give legal protection to women in Muslim marriages, advocate Nazreen Bawa argued that Muslim women and children "have always been historically disadvantaged".

The Women's Legal Centre has asked that Muslim marriages be treated the same as African customary, religious and civil marriages. The matter is being heard in the Western Cape High Court and is being heard by judges Siraj Desai, Nolwazi Boqwana and Gayaat Salie-Hlophe.

The Centre's involvement was sparked by another case heard in August in the Western Cape High Court, which stemmed from an objection by the Deeds Office to the equal division of a husband's estate between his two wives. Judgment in the application by the estate has been reserved.

Bawa, representing the Centre during the second day of arguments on Tuesday, emphasised that the intent was not to have Muslim marriages registered under the Marriages Act or to challenge the Quran and Islamic Law. Referencing several books and academic papers on Islam and Muslim marriages, Bawa said the rights of Muslim women and children had not been recognised over the years.

This led Judge Desai to interrupt Bawa, questioning her points of reference because "our history has been distorted to a great extent".

"But it seems like your basic information is correct", he said.

Attorney, Zehir Omar, is representing Lajnatun Nisaa-Il Muslimaat of the Association of Muslim Women of South Africa and the United Ulama Council of South Africa who are the sixth and seventh respondents in the matter. He argued that Bawa's references to Muslim diversity "were disrespectful" and "could cause a division in Muslim communities".

In response, Bawa said she was trying to demonstrate that the community was not "homogeneous in origins" and that not everyone would agree with "the thoughts and approaches of the application" by the estate in the other case.

She said the poor were the most vulnerable because they could not afford to challenge the legal system. Bawa said that other similar cases were also before the courts including that of Tarryn Faro who married under Muslim rites and was currently struggling to inherit from her late husband's estate.

Nine respondents, including Home Affairs, the National Assembly and the South African Human Rights Commission, are expected to submit their views in the matter over two weeks.

The matter continues in court today.

Pooran Valavioun, the Iranian Judiciary’s advisor on women and family affairs, touched upon a bill on protecting women against violence, saying, “The issue is being studied at the Judiciary.”

“Numerous proposals have been submitted to the parliament by the Judiciary, but unfortunately they have been shelved, and in many cases, motions and bills are changing hands between different legal authorities.”

She then underlined the need to enforce law pertaining to women and family affairs, according to a Farsi report by ISNA.

“If even 20% of the [provisions of] the Constitution related to women and the family are implemented, many of the problems in this domain will be solved,” she noted.

“This is while a lot of problems exist in this area, and there are a lot of laws which are not enforced,” she noted.

Valavioun said policies should be made and the existing potential should be tapped to solve the problems in that domain.

The official then described the activity of the National Women and Family Commission as an important step, but at the same time complained why the commission had not held a single meeting during the first four-year tenure of Rouhani’s administration.