• Nasrin Sotoudeh, ‘Iran’s Nelson Mandela’ Is Back In Prison, Biden Must Push For Her Freedom

• Yemen: Mothers Of Abductees Call On UN To Intervene 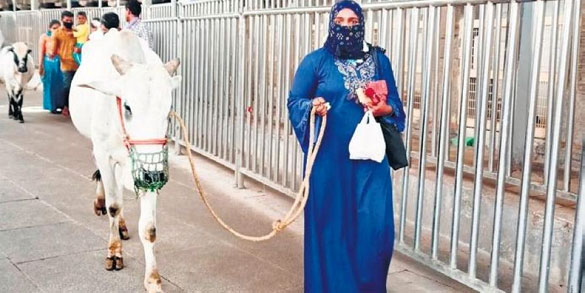 Temple authorities said that this was the first time in the history of the temple that a Muslim woman was allowed to perform Kode Mokkulu. It may be mentioned that unlike other Hindu temples, the Vemulawada temple houses a dargah on its premises.

Devotees usually visit the dargah after having a darshan of Lord Shiva and Goddess Raja Rajeshwari. In the past, Mamada ZPTC member Mohd Rafi and his family had also performed Kode Mokkulu at the temple.

Nasrin Sotoudeh, ‘Iran’s Nelson Mandela’ Is Back In Prison, Biden Must Push For Her Freedom 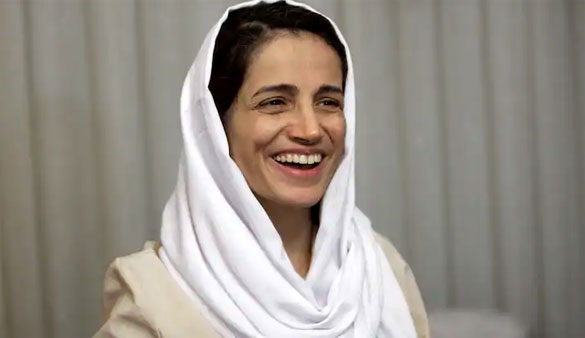 Nasrin Sotoudeh at her home in Tehran in September 2013. (BEHROUZ MEHRI/AFP via Getty Images)

Jeff Kaufman is the director, producer and writer of the documentary “Nasrin.”

Nasrin Sotoudeh, an attorney and human rights activist often called “Iran’s Nelson Mandela,” is back in an overcrowded prison cell, separated from those she loves. Under arrest since 2018, she was granted a brief medical leave this month, but it was abruptly canceled on Jan. 19, the same day the government froze her family’s bank accounts. That afternoon, her husband, Reza Khandan, drove her to Qarchak's prison for women, accompanied by their daughter Mehraveh and son Nima.

Imagine what each of them was thinking and feeling during that hour-long drive — the dread and the heartbreak. Those are emotions felt by political prisoners and their loved ones all over the world. Repressive regimes use personal cruelty to punish their opponents.

I had the privilege of getting to know Nasrin and her family while directing and producing a documentary about her life and work. We started production in mid-2016, as certain U.S. politicians began advocating a Muslim travel ban. I knew Nasrin’s story could help counter those stereotypes and highlight the diversity and resilience of Iran’s people and culture.

Nasrin was born in Tehran 57 years ago to conservative but empowering parents. As a lawyer, she continually put herself at risk by defending religious minorities, children, journalists, artists, women, peaceful protesters and those facing the death penalty. She was arrested June 2018, in part for defending women who challenged Iran’s mandatory hijab law by publicly removing their headscarves and waving them like flags.

She was sentenced to decades in prison and dozens of lashes. Yet even while held in Tehran’s massive Evin prison, Nasrin continued to challenge the authorities. Last August, she launched a 46-day hunger strike to bring attention to dangerously unhealthy conditions in Iran’s prisons.

When I think of Nasrin, and countless other human rights activists around the world facing years of imprisonment and abuse, I am reminded of the young John Lewis leading a march across the Edmund Pettus Bridge into an army of state troopers and sheriff’s deputies wielding billy clubs, bullwhips and tear gas. It’s not a coincidence that both Nasrin and Lewis had images of Mohandas Gandhi on their office walls. One of Nasrin’s pictures features a saying by Gandhi: “The true measure of any society can be found in how it treats its most vulnerable members.”

Like Mandela, another inspiring figure who often cited Gandhi, Nasrin has shown that determined voices cannot be silenced, even behind prison walls. In December, she was honored with the 2020 Right Livelihood Award (widely known as the “Alternative Nobel Prize”), and the American Bar Association’s Eleanor Roosevelt Prize for Global Human Rights Advancement (along with Anthony S. Fauci and Billie Jean King). The Iranian government’s response was to transfer Nasrin to the most unsanitary prison in the country.

Nasrin suffers from a severe heart condition, and within a month of being sent to Qarchak, she contractedcovid-19. Thanks to global attention and pressure, Nasrin was granted a three-day medical leave on Jan. 8, which was briefly extended so she could have a much-needed angioplasty.

Is it significant that Nasrin was compelled to return to prison on the day before President Biden and Vice President Harris were inaugurated? It’s not possible to know, but the Iranian government does have a history of using prisoners as pawns. Biden rightly called the previous administration’s Iran policy a “dangerous failure.” Now is the time to reinstate the Iran nuclear deal, build some level of trust and press for human rights.

In a letter written after her arrest to me and the film’s producer, Marcia Ross, Nasrin said, “I’m sending you this letter from prison, but I’d rather talk of freedom. So, let me speak to you of my dreams, and of roads traveled and not yet traveled. No government out of animosity can prevent individuals from having human relations. It’s time to put history behind us to look ahead. That’s why when politicians show hostility, we need to hear words of love and respect more than ever. I am so grateful for our collaboration. We lean on our friendship and walk toward each other.”

An urgent call for her freedom and the release of hundreds of other nonviolent political prisoners is not a way to set our countries against each other. It is a vital step toward mutual respect and cooperation. As Nasrin said, it is time to “lean on our friendship and walk toward each other.”

Al Rostamani, currently the chairperson of FAB Private Bank Suisse, will be the first female CEO of the $44 billion lender and takes over from Andre Sayegh, who spent less than a year in the role. She is currently deputy group CEO and head of personal banking, according Bloomberg.

Al Rostamani is among a growing number of women tapped to lead companies in the Middle East. Last week, Oman named Haifa Al Khaifi as the CEO of a new firm that controls the country’s biggest oil block. She also served as independent director at Emirates Integrated Telecommunication Co. and vice chairperson of Emirates Institute for Banking & Financial Services

Other women in leadership positions in the region include Sarah Al Suhaimi, chairwoman of Saudi Arabia’s stock exchange and head of NCB Capital Co., and Carmen Haddad, vice chairperson of Citigroup’s operations in the Middle East.

“FAB has always been an organisation that champions diversity and the appointment of our first female group CEO to lead our company into the future is truly something to value,” chairman Sheikh Tahnoon Bin Zayed Al Nahyan said. issacjohn@khaleejtimes.com

RIYADH — The monthly Saudi Women’s Bowling Championship kicked off on Monday in three major cities — Riyadh, Jeddah and Dammam — with the participation of 58 players.

The Saudi Bowling Federation oversees the competitions. There are 18 players competing at the Universal Bowling Center in Riyadh, while the Jeddah Lanes Bowling Center hosts competitions of 24 players, and 16 players are participating at the Gym and Bowling Al-Gosaibi Hotel Sport Center in Dammam. The top three women’s champions will be awarded SR1,500 each.

The Bowling Federation stipulated that each player should submit online the federation’s annual membership fee of SR100 for registration through its website. Those who have registered this way will be allowed to compete in 12 monthly championships in each city. There will be three open championships in three major cities, and prizes, valued up to SR30,000, will be awarded to the winners in the open tournaments.

Saipa defeated Shahrdari Qazvin in straight sets (25-7, 25-12, 25-17) in Iran Volleyball Federation’s hall in Tehran to win the title for the second successive year.

The 20th edition of Iran Women’s Volleyball Super League started with eight participating teams. The competition was originally scheduled to be played with 14 teams but eight teams took part under observing severe health protocols in a centralized venue.

The teams are drawn in two pools of four teams. Saipa, Shahrdari Qazvin, Exxon Tehran and Sarvghamatan Babol are in Pool A and Zob Ahan, Khojasteh Eslamshahr, Paykan Tehran and Setaregan Fars are in Pool B.

Yemen: Mothers Of Abductees Call On UN To Intervene

The Abductees' Mothers Association called on the United Nations secretary-general and his special envoy to pressure the Yemeni parties to release those who have been kidnapped, women and the sick, immediately and unconditionally.

This came in a statement issued by the association in conjunction with the fifth meeting of the supervisory committee on prisoners and detainees held in the Jordanian capital Amman on Sunday.

The organisation documented the abduction of 725 civilians, including two women, and 119 cases of forcible disappearances, including that of two women, held in Houthi prisons and six civilians detained in the prisons of the internationally-backed government.

In a statement, it said kidnapped and detained civilians have a right under international law to freedom, and those who have kidnapped them should be held fully responsible for their lives and safety.

The statement called on the United Nations and its special envoy to Yemen to put pressure on the concerned parties to reveal the fate of the forcibly disappeared civilians and grant them their rights without delay.