Saudi Women: Widows, Spinsters and Divorcees, To Look For Jobs 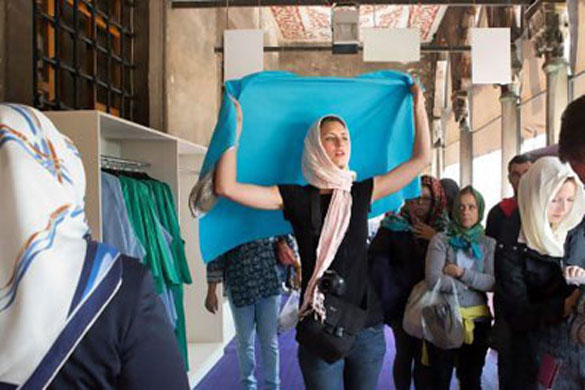 Photo: A foreign tourist dons a head covering as she visits the Blue Mosque in Istanbul. Trueky.Kerem Uzel for The National

•  Only 6 of 150 Women Candidates Win NA Polls in Pakistan

•  Suspended Jammu jail official made undertrial write exam for her

Saudi Women: Widows, Spinsters and Divorcees, To Look For Jobs

The need to meet life's demands has forced Saudi women, especially widows, spinsters and divorcees, to look for jobs. Married women also look for jobs to help their husbands meet daily expenses, a task that has been very exhausting.

Women have the right to be employed after spending long years of their lives in education to serve themselves and their country. It is not conceivable that a woman spends 12 years in general education and five years in university, in addition to several years for post graduate studies, only to find herself finally sitting idle at home.

They said about 76 percent of jobless Saudi men are only holding secondary school certificates. The experts said the number of unemployed Saudi men and women has reached about half a million.

The experts were talking during the Career Day organized by Dar Al-Hekma College for Women in Jeddah, with more than 40 private companies participating to attract Saudi job seekers. They said the number of jobless men is 293,176, while unemployed women number 177,174. There are only 21,298 unemployed foreigners.

According to the statistics, foreigners occupy about 90 percent of available jobs in the private sector while about 500,000 Saudis, who represent about 10 percent of the number of the foreigners, are jobless.

This makes it imperative for private sector establishments to work together as a team to shoulder their social responsibility toward the Saudi citizens.

The dean of the college said the eighth Career Day was aimed at enabling private companies and establishments to offer jobs and training to qualified Saudi cadre to enter the labor market, which is highly competitive.

ISTANBUL // When Olga, a young woman from Ukraine, arrived at the visitors' entrance of Istanbul's famous Blue Mosque this week, a surprise was waiting for her.

"Please wear this," a female mosque official told Olga, 28, who was dressed in a sleeveless shirt and shorts. She was handed a blue cotton robe that covered her whole body, with an attached piece of cloth to cover her hair.

Authorities in Istanbul began providing the robes, as well as headscarves and skirts, this week in an effort to preserve a semblance of serenity at the city's places of worship that are visited by millions of camera-wielding and sometimes scantily clad holidaymakers every year.

At the Blue Mosque's entrance for tourists, visitors were first asked to take off their shoes and put them into plastic bags provided for the purpose. As the tourists went on towards the door leading to the mosque's main prayer room, three officials watched to see who was inappropriately dressed.

A plastic mannequin in the walkway, dressed in a robe and a headscarf, served as a model of how visitors should dress.

Olga closed the zipper that ran down the length of her robe as she walked towards the door leading into the mosque with her friend Jelena, 29. Both women gave only their first names.

"You should respect religion," Olga said. "It's OK if those are the rules."

All mosques in Istanbul are closed to tourists during prayer times.

The Blue Mosque, known as Sultan Ahmet Camii in Turkish, after the Ottoman sultan Ahmet I who had it built from 1609 to 1616, gets its English name from the blue tiles in its interior. It draws four to five million tourists a year, according to the office of Istanbul's mufti.

The deputy mufti, Sabri Yilmaz, said the new robes represented a "more professional" way to make sure that tourists' attire was in line with religious rules.

"We have been giving out scarves to tourists in mosques for 30 years," Mr Yilmaz said this week. "But it has been a bit amateurish. This is more professional."

Mr Yilmaz said the robes were not a way to tell people what to wear.

"This is not about fashion, everybody can wear what they like," he said.

"If people from Africa or from Europe come to the mosque in traditional clothes that are acceptable [from a religious standpoint], then in they go. What matters to us are religious rules."

Signs around the Blue Mosque explain those rules to visitors: men should wear long trousers, but can wear short-sleeved shirts. Women should cover their hair and arms, as well as their legs from the knees up.

At the entrance, visitors have three choices, depending on the modesty of their dress. Apart from the full-body robes, which come in blue and green, there are turquoise headscarves and blue skirts with Velcro fastenings.

While headscarves were for women, the robes and skirts are for visitors of both sexes.

"I feel very strange," said Alan Sarsa, a tourist from Sweden, as he looked down at the blue skirt covering his shorts and legs.

Mr Yilmaz said the reusable garments represented an effort to strike a balance between the rights of worshippers and the interests of tourism at the city's mosques.

"They are houses of worship as well as interesting places for visitors."

The garments were designed by a team made up by representatives of Istanbul's mufti and atour guide association, to make sure they complied with religious rules and were easy to use for visitors. Tourists return the garments as they leave the mosques. The use of the garments is free, with Istanbul's municipality paying for the project.

Murat, a helper at the Blue Mosque, said summer months posed a special challenge for him and his colleagues.

"When it gets hot, people come with short clothes. Some almost come naked," he said.

But other officials said many tourists knew about basic rules of attire for mosques and came with their own headscarves.

"Today's travel guides tell people what to wear in a mosque," said Yakup Sari, a representative of the Sultan Ahmet Mosque Protection and Improvement Foundation, which oversees cleaning and technical services at the mosque.

Mr Sari said there was still no verdict on whether robes, headscarves and skirts had fashion appeal.

"I don't know whether they are chic, that's for the ladies to decide," he said.

Only a few visitors showed displeasure with the new rules.

"I have come here so often with these shorts and it's never been a problem," a foreign tour guide complained as an official asked him to put on a blue skirt.

A woman from Italy, who had brought her own headscarf, was irritated when she was asked to put on a skirt to cover her tight leggings.

"I thought I was modest already," she said.

Only 6 of 150 women candidates win NA polls in Pakistan

Islamabad: Only six women have won polls to Pakistan's lower house of Parliament, a two-thirds reduction from the 18 directly-elected members of the outgoing National Assembly.

Polls to 272 seats of the National Assembly were held on May 11.

Another 60 seats reserved for women and 10 reserved for non-Muslims will be allocated to political parties according to their performance in the polls.

The six women directly elected to the National Assembly are Sumaira Malik, Saira Afzal Tarar and Ghulam Bibi Bharwana of the PML-N and Faryal Talpur, Azra Fazal Pechuho and Fehmida Mirza of the Pakistan People's Party.

None of them are new entrants to politics.

Fehmida Mirza was the speaker of the outgoing National Assembly while Talpur and Pechuho are the sisters of President Asif Ali Zardari.

The Election Commission has so far announced results for 261 of the 272 directly elected seats and the PML-N is set to form government after emerging as the single largest party with 124 seats.

Polls in 11 seats have been terminated, postponed or withheld.

A total of 150 had contested the General Election from 111 constituencies across Pakistan. Sixty of them contested as candidates of political parties.

No women candidates were successful in Balochistan and Khyber-Pakhtunkhwa provinces.

The successful women candidates of the PML-N all from Punjab while the winning PPP candidates are from Sindh.

Four of the successful women candidates have achieved hat-tricks.

Talpur won by the largest margin of 64,438 votes while Bharwana had the lowest winning margin of 18,152 votes.

The number of women elected to the four provincial assemblies remained unchanged from the figure in the 2008 polls.

Only 10 of the 313 women who contested from 213 constituencies of the provincial assemblies were successful.

Of the 10, eight belong to Punjab while one candidate each is from Sindh and Balochistan.

No woman won a seat in the Khyber-Pakhtunkhwa Assembly.

All eight successful candidates in Punjab are from the PML-N as is the sole woman to win a general seat in the Balochistan Assembly. One PPP candidate won from a provincial constituency in Karachi.

Saturday, May 18, 2013 - Islamabad/Peshawar/Lahore—Pakistan Muslim League-N chief Nawaz Sharif has appealed party workers and the nation to observe Youm-e-Tashakar (thanksgiving day) on Friday to celebrate the victory of party in May 11 elections,a private news channel reported. According to the channel report the PML-N made a triumphant comeback, securing 123 seats of National Assembly and 212 of Punjab assembly as its chief Nawaz Sharif is all set to become Prime Minister for the third time.In a statement, Nawaz Sharif appealed workers and people to offer special prayers on the thanksgiving day on Friday.

Peshawar: PML-N women-wing City District Peshawar here Friday observed thanks-giving day and offered prayers in the green lawn of Peshawar Press Club (PPC). The PML-N women activists gathered in large number in press club to offer thanks-giving prayers on the landslide victory of the party in May 11 polls. Speaking on the occasion, president, city district women-wing, Robina Bokhari paid tributes to the leadership of their party for taking bold and people-friendly stand on the problems and challenges faced by the people of the country.

She was confident that the PML-N leadership would maintain its track record and play role in the resolution of the grave crises faced by the country and will take measures for the welfare of the people in general and protection of the rights of women in particular. Robina Bokhari said that PML-N had not only emerged as single largest political party at federal level, but also in position to constitute provincial governments in the country. She pledged to play their due role in the strengthening of the party and in future turn it into largest political force of Khyber Pakhtunkhwa.