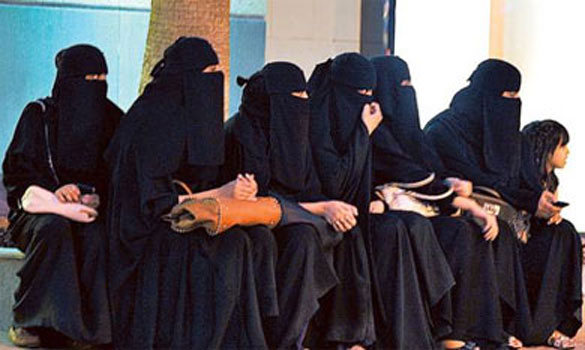 This file photo shows Saudi women waiting for their drivers outside a shopping mall in Riyadh. Image Credit: AFP

•  Women Forced To Undergo C-Section at Private Hospitals in Sindh

•  Saudi Arabia to Allow Women to Apply For Government Services

•  AIMPLB Should Be Abolished For The Sake Of Muslims, Says Taslima Nasreen

Saudi King Salman has issued an order, which will free women from having to obtain consent from their male guardians in order to receive services.

The change, however, should not contradict the Islamic Sharia, the order said.

Saudi media outlets said that the new order includes as well the mobility to work places, unless there is a legal basis in accordance with the provisions of Islamic Sharia.

Saudi women has long needed the permission from their Mahram - a male relative who it would be unacceptable to marry such as brother or father - to travel outside the country, accompany them to verify their identity at government institutes or file a police complaint.

The king required all governmental organizations to squeeze their workflow based on to the new change, and to identify all requirements that include the guardian’s approval as a condition to complete any action or obtain any service.

The king also demanded the lifting of the male guardianship within three months and required government institutes to make the order public on their official websites.

In addition, the Ministry of Labor and Social Development is required to provide the means of transportation for women workers, depending on the available resources and in accordance with the provisions of the Labor Law.

The order came after the approval of proposals by the Saudi Council of Ministers to find solutions pertaining to women’s rights.

Women Forced To Undergo C-Section at Private Hospitals in Sindh

Kandhkot - Unnecessary C-sections are being conducted in most of the private clinics, hospitals and various centres of the upper Sindh where lady doctors play with the lives of women.

Driven by the consideration for money, ruthless gynaecologists terrify families of the pregnant women by saying that they must get them operated; otherwise lives of both mother and baby are at risk.

Hence in order to save lives of both mother and child, the families have no choice but to go for C-section.

This does not stop here as lady doctors loot women on different pretexts: by charging them fees including of OT, medicines, room service and operation.

But this amount is insufficient for such pitiless and greedy doctors and in order to mint more money they deliberately conduct C-sections.

However, some people have a different opinion and they say that women themselves prefer C-Section.

Saudi Arabia to allow women to apply for government services

The current procedures to get various government services include providing written approval by the women’s guardians to process their applications.

Public organisations were requested to list services that women could apply to evaluate if they could be included in the order in accordance with Islamic regulations within the next three months, Sabq online news reported.

Saudi Arabia does not allow women to drive and this has been a hindrance for many of them to get jobs or lead independent lives.

AIMPLB Should Be Abolished For The Sake Of Muslims, Says Taslima Nasreen

Terming All India Muslim Personal Law Board (AIMPLB) an exclusive organisation of Sunni fundamentalists, exiled Bangladeshi author Taslima Nasreen has advocated its abolition in the interest of the Muslim community itself.

In an interview to Times of India, Taslima Nasreen rued that AIMPLB objects to any change in the divorce laws to confer parity to Muslim women.

“This is an organisation of Sunni fundamentalists which does not take into its fold Shia and Ahmadiyya Muslims. Its duty is to protect Muslim personal laws which are based on Sharia. It supports the antediluvian system of triple Talaq, child marriage, and opposes gay rights,” Taslima Nasreen said.

Calling for abolition on AIMPLB, Taslima added that Muslims need but modern civil laws based on equality and justice only.

“This board issues Fatwas against reforms in Islam and all kinds of progressive ideas. The misogynistic law board should be abolished for the sake of Muslims. Muslims need no other laws but modern civil laws based on equality and justice,” she added.

On the issue of triple Talaq, Taslima pointed out that many Muslim countries including Pakistan and Bangladesh have already banned it.

She added that India is yet to ban triple Talaq because of “politics of appeasement”.

Taslima further said that any law or system which reduces dignity of human beings cannot be essential to any religion.

“Even if triple Talaq were an inseparable part of Islam, it should still be discarded because women do not have the same right to divorce their husbands,” Taslima said.

Mumbai: Activists working for the welfare of Muslims, especially women, on Thursday said that apart from triple talaq, the community was grappling with several other serious issues that need to be addressed on priority.

Heads of several advocacy groups, mainly working in Maharashtra and Gujarat, asserted that lack of education and healthcare facilities, feeling of insecurity, beef ban, communal riots targeting the minorities, unemployment were some of the issues that Muslims were facing, which need to be addressed.

"We want what the Constitution says for equal opportunities and human rights to every Indian citizen. End of triple talaq would not guarantee alleviation of all the woes of Muslim women. Prime Minister Narendra Modi's stand on triple talaq alone is not sufficient. It needs to go beyond that," Hasina Khan of Bebaak Collective and an intervenor in Shayara Bano case, said.

Terming the previous governments at the Centre as merely "vote seekers", Khan said, "It is good that the Modi government has raised the issue of triple talaq, but it should also be cleared that we consider Modi as our hero. He needs to do a lot to instill a sense of social security among us."

Khairunnisa Pathan of Parvaaj Sangathan alleged that the rehabilitation process of riot-affected people in Gujarat was "poor and defective" as the government machinery was "not doing its job in a fair manner.

"It's good that triple talaq issue has got some momentum. But there are other issues as well, which are creating panic and insecurity among the Muslims countrywide. Apart from triple talaq, there are issues like health, education, sanitation and means of livelihood that needs to be addressed at the same time," she said.

'I earned this money through much suffering. This money is precious. Please help me exchange it.'

For over a year, Aruna had saved up the money her clients tipped her with at an Indian brothel she was sold in to, thinking could some day exchange the notes once she returned to her homeland, Bangladesh.

But soon after she was rescued from a brothel in the Indian city of Pune, she learned that the notes she had scraped together – 500 and 1000 rupee banknotes, totalling Rs10,000 – were rendered worthless in the wake of the ban Indian Prime Minister Narendra Modi had put on them in an effort to crack down on corruption.

So with the help of Rescue Foundation, the organisation that freed her, Aruna filed a grievance to PM Modi himself, via Twitter, reports Hindustan Times.

“I used to hide this money from the brothel keeper in my pants pocket as I wanted to take it home,” Aruna wrote in a letter tweeted to Modi late on Tuesday from the Twitter handle of the Mumbai-based Rescue Foundation.

“I earned this money through much suffering. This money is precious. Please help me exchange it,” she wrote.

Modi’s shock currency move to withdraw its two highest banknotes aimed to bring billions of dollars of unaccounted wealth that people are hoarding, or “black money”, into the mainstream economy and curb corruption.

Previously employed as a garment worker in Bangladesh, Aruna was trafficked into India by a coworker with the familiar promise of a well-paying job. No sooner than she crossed the border, she was sold as a sex worker.

She worked at a brothel in Bangalore for a year and a half before being sold to another in Pune, where she was rescued a day after arriving, in December 2015.

In March this year, Bangladesh issued her a travel permit to return home.

Aruna is one of 19 trafficking survivors who on May 15 will board a train in Pune and travel about 1,800km to eastern India, where a police bus will take them across the border to Bangladesh.

But unless her money is exchanged, she will go home penniless.

“The money would lend some legitimacy to her absence from home. She will be able to tell her family that she was working in India,” said Tanuja Pawar, assistant superintendent of the Rescue Foundation shelter in Pune where Aruna stays.

There has been no official response from the Prime Minister to Aruna’s letter, Rescue Foundation officials said, and Modi’s office did not immediately respond to requests for comment.

In the meantime, many people have come forward to give her money to take back home after her tweet.