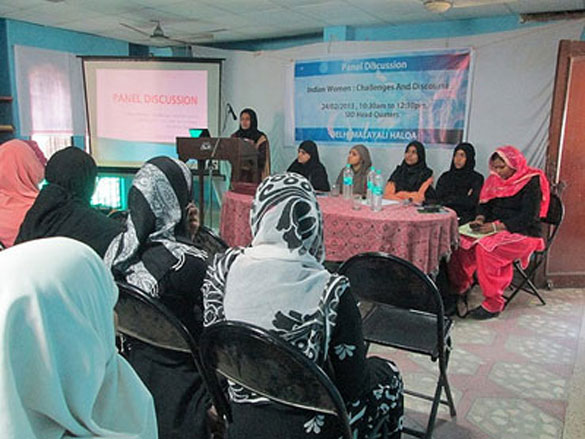 •  Lebanese Women Take to the Streets and Dance for Their ‘Rights’

•  Response to 'The Islamic Solution to Stop Domestic Violence'

•  Marriage — the Most Critical Decision One Will Ever Make

•  150 years after war, more is known about role women played

Derogatory terms such as "prostitutes" and "the filth of society" were used to describe the highly-achieved female academics and technocrats who were only sworn into the Council a few days after a highly-acclaimed Royal Decree was issued by King Abdullah bin Abdulaziz.

The tweets quickly became widely-spread through the social media network and rapidly developed their own hash-tags; however, many Saudi tweeps condemned the attack on the female Shura members, especially since they came from figures who are supposed to preach tolerance, compassion and respect.

Among the clerics who resorted to insults was member of the Islamic Ministry for Da’wah, Guidance and Endowments, Ahmed Al-abedulqader expressed his discontent of women partaking a role in the Shura Council over his Tweeter account, “They thought they can mock the mufti by giving these 'prostitutes' legitimacy to be in power. I am not an imposter, and imposters do not fool me. For how long will the forts of virtues be torn down?”

Following angry reactions by Twitter users, Qader said: “We have heard and read many insults against (God) as well as mockery against the prophet, prayer be upon him, and none of those defending (these female) members was angered.”

For his part, Dr. Saleh al-Sugair, a former teaching assistant at King Saud University slammed the assignment of female members at the council and tweeted: “The insolent (women) wearing make-up at the Shura Council represent the society? God, no. They are the filth of society.”

His tweet reads: “The fools of the Shura council, these immodest women represent the society? I swear by God’s name they do not. They are society’s scum, garbage.”

This wasn't the first controversial statement al-Sugair? who is not a cleric but a medical doctor known for extreme religious views.

Last year, he called for a complete separation in medical colleges between male students and female students.

He spoke on what appeared to be a religious program saying “ why do you need to employ females when we have unemployed males who are providing for their families” and he added “what is the point of having a male doctor with a female secretary?”

He insisted that there is no need to have female receptionists in hospitals and especially in male sections.

Sugair has over 40 thousand followers on twitter and is known for advocating against women employment, women driving, and women treating male patients.

However, the backlash to the recent statements regarding the Shura Council appointees was severe.

Author Maha al-Shahri tweeted: “(These statements) are a moral crime. The government has to set laws to (teach) them and their likes (morals).”

Doctor Abdelrahman al-Sobeyhi tweeted: “Every disease has a medicine to heal it except stupidity.”

Another user, Ali Abdelrahman, wrote: “This is ignorance that does not belong to Islam.”

“The problem is that they think they have immunity from God!” another twitter user said.

A royal decree last month amended two articles in the council’s statute introducing a 20 percent quota for women in the country’s Shura Council, and the king appointed 30 women to join the consultative assembly.

The council was sworn in last week.

The assembly, whose members are appointed by the king - and until recently were exclusively male - works as the formal advisory body of Saudi Arabia. It can propose draft laws which would be presented to the king, who, in turn, would either pass or reject them.

Previously, the European Union has welcomed Saudi King Abdullah’s recent decree allowing women to be members of in the kingdom’s Shura Council for the first time as a major development in the direction of women empowerment.

“We welcome the announcement made by King Abdullah of Saudi Arabia on Friday Jan. 11 to appoint 30 women to the country's previously all-male Shura Council,” according to statement by Nabila Massrali, a spokesperson for the European Commission.

AL-KHOBAR — A Dawah (call) forum allowed Saudi girls to play hockey and table tennis, stoking the debate on whether to allow women to practice sports in Saudi Arabia.

The forum, organized by the Cooperative Office for Dawah and Guidance of Communities in Al-Khobar governorate, witnessed other activities that aimed to counter calls for Westernization and women’s liberation, Al-Hayat reported Sunday.

Dr. Adhbah Al-Musainid (Qatar), who specializes in alternative medicine, considered the Convention on the Elimination of All Forms of Discrimination Against Women (CEDAW) that calls for equality between men and women as a contradiction between religions and norms.

She said the US was among the first countries that refused to sign this convention.

The Lamasat Banat (Girls’ Touch) tent in the Second Al-Khobar Girls’ Forum at the sea front in Al-Khobar has attracted hundreds of women and girls.

The coordinator of the section, Lulua Al-Amoudi, said: “We are striving to attract girls and urge them to practice beneficial recreation.”

She confirmed there was a great response from girls to these two sports.

Visitors said the tent in which sports were played attracted most of the girls.

According to estimates by the organizers, over 120,000 women and girls visited over five days, to the extent that there were long waiting lists for girls keen to play hockey and table tennis.

The girls were divided into groups, each group comprising four girls. About 450 girls replaced their niqab with garments that covered them better, as well as gloves and socks.

Turkey’s proposed new more modest dress code for its flight attendants has been criticized at least by the country’s seculars with some Twitter users deriding the new suggested uniforms as reminiscent of the costumes worn in the Ottoman era, a newspaper reported Monday.

According to The New York Times on Monday, the proposed new look include long dresses and skirts below the knee, and Ottoman-style fez caps.

Critics, who likened the suggested uniforms as to those worn in the “Magnificent Century,” a popular Turkish soap opera about the decadent reign of Sultan Suleiman the Magnificent in the 16th century, heightened their disapproval amid media reports of Turkish Airlines banning alcohol on their flights.

However, earlier this month the national carrier denied the reports and said its policy to serve alcohol on both its domestic and international flights continues to be uninterrupted.

Secular Turks, who fear over-domination by the ruling Islamist Justice and Development Party headed by Prime Minister Recep Tayyip Erdogan, are wary that the party’s decade-long run in power will change the country’s traditional secular culture.

They also doubt that the national airline, nearly 50-percent-owned by the government, is simply trying to please Erdogan.

“Turkish Airlines is leaning toward a more conservative line,” Serdar Tasci, a sociologist who also works as a consultant to the main secular political party, the Republican People’s Party, or C.H.P., told the paper. “On the one hand it is trying to be a global brand, and on the other it is allying with the neoconservative policies of the political power.”

In a country where women are not allowed to wear the head scarves, it saw a breakthrough change when Erdogan’s party lifted ban on female students wearing Islamic head cover in schools providing religious education late 2012 in addition to restricting the serving of alcohol in certain places.

“It is a reaction [seculars not wanting the new dress code] against imposing a certain lifestyle to all institutions in Turkey,” Ayse Saktanber, a sociologist at the Middle East Technical University in Ankara, told the paper. “Turkey is a pragmatic society which doesn’t like to fall behind the world. These new costumes came with the alcohol ban on planes.”

“Even my students with head scarves find these ridiculous,” she added.

Erdogan’s party has worked to tame the influence of the military - the self-appointed guardians of secularism since the modern republic was founded in 1923 - over the past decade, but he denies an Islamist agenda.

Lebanese women take to the streets and dance for their ‘rights’

Dozens of Lebanese women dance in front of the home of the country’s parliament speaker, Nabih Berri, to send a clear message of urgency to pass a law that looks to protect women from domestic violence.

Berri’s home was the chosen destination because in a 2009 parliament session he was the one who called for the implementation of laws to protect women from domestic abuse, honor killing and an amendment to discriminatory laws against women.

“I am pleased to attend the Girl Guides Day under the slogan ‘Safe Girl … Safe Community’, which aims to spread the concept of safety in society through girls who will bring up generations by giving them the needed skills to deal with domestic violence,” Princess Adela said delivering her speech.

A political analyst tells Press TV that Turkish Muslim women expect from the Islamists Justice Party in power to do something against the ban of Hijab because they promised that after they won the election they will remove this ban.

The comments came after more than 12 million Turkish citizens signed a petition to lift a controversial ban imposed by the Ankara government on wearing headscarves in public places. Several protests have been held across the country and civil disobedience has been part of the union’s move to force the government to lift the controversial ban.

ISLAMABAD: The police have arrested a university student who allegedly murdered an 11-year-old-girl, who was reportedly raped and then burnt to death in Sector I9.

The university student is said to be the boyfriend of the minor’s tutor.

Inspector Mehboob Ahmed, a senior police official at Bhara Kahu Police Station confirmed the arrest and said that the accused student was in police custody.

Response to 'The Islamic Solution to Stop Domestic Violence'

Although this post came to our attention close to a year after it was written, as young Muslim women having worked with and/or written about gender-based violence issues that have personally affected some of us, we deemed it fit to respond. Also, the points discussed in this article are not only limited to the particular post written by Rashid, but rather it addresses similar arguments that have been made by other writers as well on this issue.

When Azra Jafari became mayor of Nili, she knew that the impoverished and remote Afghan town desperately needed roads and investment. She was aware she would be living in very basic conditions, on a meagre salary of $76 (£50) a month, and that taking care of a four-year-old daughter at the same time would be challenging.

RIYADH — It was a historic day for women in Saudi Arabia as 30 members took their seats in the Shoura Council to attend the activities of its sixth session here, Sunday.

Marriage — the Most Critical Decision One Will Ever Make

Anyone my age would agree that marriage is the most important decision one makes in his/her life.

It is a difficult decision for a man to choose his future wife and a woman to choose her future husband. It is even more difficult for women to do so in a male-dominated society like ours; therefore, young men and women alike should think very carefully when they decide who they want to marry. They should not rush to tie the knot unless they are fully convinced that their potential future partner is the right spouse.

150 years after war, more is known about role women played

Minnesota native Frances Clayton was also a Civil War woman, dressed like a man to fight on the front lines alongside her husband at the battles of Shiloh and Murfreesboro, where he died.