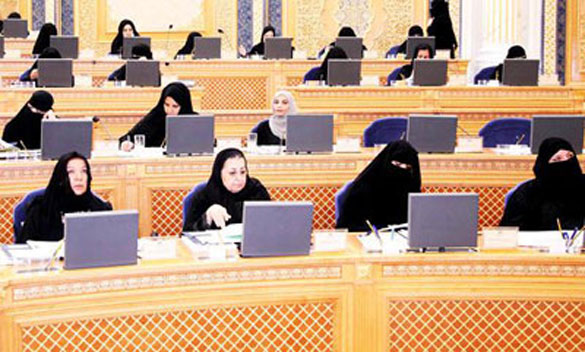 Photo: Female members of the Shoura Council. The council accepted a petition of 3,000 names requesting a review of the issue of women driving in the Kingdom

•  Spotlight on Petition to Lift Driving Ban on Saudi Women

•  When Women Prostitute Their Integrity

•  Women to Be ‘Eyes and Ears of Government’, Says Najib

•  Women’s Rights in Afghanistan, “A Justification for War”

Islamabad: The Saudi Arabian head of Pakistan's International Islamic University has stirred up a controversy by firing employees who spoke to women colleagues and taking action against an official for allegedly watching a movie on the internet.

Ahmed Yousif Al-Draiweesh, the president of the prestigious varsity, can neither speak Urdu nor English and is unable to communicate with students or members of the faculty without a battery of interpreters.

He recently issued instructions to fire a member of the Urdu faculty for delivering a lecture in Urdu but was subsequently forced to reconsider the decision.

Draiweesh's tenure "has been marked by language problems, cultural differences and irregularities that have increased mistrust and suspicion" between the university's management and faculty, the Dawn newspaper reported.

The president began termination proceedings against the director of the university's finance wing, a male, because he spoke to a female employee.

Action was also taken against the director of human resources, who has been working at the varsity for 30 years, for talking to a female employee.

A hostel provost was removed after a group of students accused him of "watching a movie on the Internet", an unnamed official told the daily.

Such a matter is "a minor crime in Pakistan" and the provost should have received a warning but Draiweesh removed him as the "crime is more serious in Saudi Arabia", the official contended.

Referring to the problems under Draiweesh, an unnamed official said: "There are around 23,000 students in the university, most of whom cannot communicate with the president at all."

Faculty members too claimed they had been affected, as those who speak Arabic have "managed to get close" to Draiweesh, a position from which they can influence policy. The state-run International Islamic University was once considered one of the world's leading centres for the study of Islamic thought, law and history.

Nine persons were killed when two suicide bombers targeted the varsity in October 2009. It was then widely reported that the institution was targeted because of the liberal stance of teachers.

University spokesman Hairan Khattak confirmed Draiweesh's language difficulties but claimed they had caused no problems. However, one official recounted a disturbing situation that occurred two weeks ago due to the language barrier.

Draiweesh attended a lecture and began to suspect that the professor was speaking in Urdu, a fact that was later confirmed.

"Because (the university's) policy is that teachers must lecture in either English or Arabic, Dr Draiweesh issued instructions to terminate the teacher," the official said.

It later emerged that the professor was a member of the Urdu faculty and was giving a lecture on that subject, which cannot be taught in any other language.

After what the official described as "a long discussion", the professor was allowed to keep his position. But Draiweesh's lack of fluency in English and Urdu has required the presence of "at least five" interpreters or translators, who translate every letter written to him and communicate on his behalf.

"If the president can't understand his teachers and students, how can he convey instructions to them, how can he guide them?" he said. Draiweesh was appointed president of the varsity in October last year.