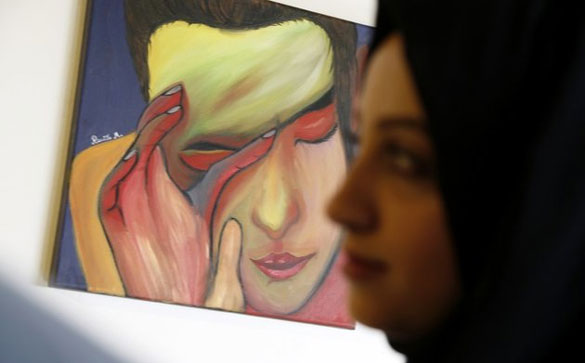 Yemeni artist Rawya Ahmed stands in front of one of her paintings displayed in an exhibition, in Sanaa, Yemen, on Jan. 6, 2020. (Photo by Mohammed Mohammed/Xinhua)

SANAA, Jan. 8 (Xinhua) -- Rawya Ahmed, a Yemeni female artist, opened her first personal exhibition in the Houthi-controlled Yemeni capital Sanaa. Instead of visualizing the pains of the war and destruction, the artist's paintings offer a rare serene beauty, which she hopes to console the people that have been caught up in the bloody war.

"For me, it was a discharge of negative energy that I have got during the war. I used to feel annoyed but didn't know how to get rid of the pressures. Luckily, I finally found that I can seek shelter in the beautiful things, " Rawya told Xinhua.

Rawya's exhibition is a rarity in Yemen since the war erupted in 2014. Now for most Yemenis, the most pressing problems are escaping the next air raid or finding the next meal for their families. But some artists, like Rawya, now try to put the country in a positive light through their brushes and colors, and try to find an escape for the people and themselves to momentarily forget the sounds of explosions and air raids.

In Rawya's paintings, she tried to change the misery on people's faces by using delightful colors.

"In the exhibition, we have special sections on paintings of famous people in the country, such as the Yemeni writer and poet Abdullah Al-Baradouni, and the singer Abu Bakr Salem," Rawya said, adding that the artistic portraits of familiar faces can offer people a nostalgic consolation before the war erupted.

While daily life in Yemen is tough to say the least, some people still seek aesthetic pleasures. Many visitors coming to the Rawya's exhibition believed it could alleviate the despair inside their hearts.

Samah Al-Wajih, one of the visitors who attend the exhibition, expressed her gladness in the paintings and wished all the world to see that there is still beauty, despite the destruction, in the country.

"It is terrific that in the disaster-stricken country, there are still people capable of creating beautiful arts like this. This certainly calls on the world that there are hope and life inside this war-ravaged country," Al-Wajih told Xinhua.

"Young men and women are looking, through their paintings, for love, peace, and safety away from the war. In these drawings, You can feel the touches of a person who wants peace and a good life far off the crazy war that destroyed souls," Abdul Wasea Al-Ahnoumi, an organizer of the exhibition, said.

The fighting between Iran-backed Houthi militia and a Saudi-led military coalition supporting the country's internationally-recognized government has left the Arab country in ruins.

"We had enough war really. Not a single day goes by without losing a person dear to us. The war needs to stop. We need responsible authorities to help us protect peace and art, not inciting wars," the artist said. Enditem 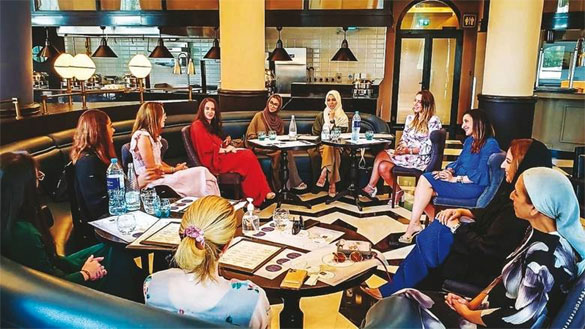 Members of the Forum during a meet-up

How an online forum, helmed by two successful Jewish career women, is opening doors for dialogue on peace and prosperity

The Gulf-Israel Women’s Forum is an idea whose time had come. The online platform, which predates the signing of the momentous Abraham Accords on September 15, is the brainchild of Justine Zwerling and Fleur Hassan-Nahoum, who have been friends for almost 30 years.

In retrospect, Fleur says she knew in “their bones that this was our part to play in the regional peace story”. “We have been there and done that,” she says. “We saw the tangible benefits and wanted to replicate our previous successes to make the Middle East a better place for our sons and daughters.”

Justine has carved a niche for herself as the head of primary markets for the London Stock Exchange (LSE) and is also the founder of the Jewish Women’s Business Network. She was also named as one of the 100 most influential women in finance and diversity in 2020.

Fleur wears many hats. She is the deputy mayor of Jerusalem and holds the foreign affairs portfolio. She also co-founded the UAE-Israel Business Council with Israeli entrepreneur Dorian Barak.

The Forum, which has hundreds of members, is an offshoot of the Council. Its germinal thought, as Justine puts is, is premised on “who you are”, “what you do” and “how I can help you”.

“Fleur and I realised that we are living our life’s dream to reunite as women and family,” says Justine. “We knew that the Forum was one of the critical steps while building the Council, as both are inextricably linked.” Justine says the key was playing to the instinctive strength of women who are “natural networkers, nurturers, multitaskers and gamechangers”.

Fleur remembers coming across a research paper that had cited women create 10 per cent more value than men for their businesses through networking. “The study made a lot of sense to me,” she says. “I believe that women are strong connectors, as we not only converse more, but also listen more.”

She believes women can be natural peacemakers in the Arabian Gulf. And what better place than the UAE and Bahrain, who are signatories to the historic Abraham Accords. “We want to make this a Gulf-wide initiative, as we understand other countries may come on board of the Abraham Accords and our network should evolve into a regional grouping,” adds Fleur.

As Jewish women who have successfully built impactful women’s communities, Justine says, “We knew that we have so much to learn from our Emirati and Gulf sisters. Bringing us together in organic small forums was the first key to beginning our new future, together.”

The Forum, Justine points out, would unite women from the Gulf and Israel in friendship, culture and business. “We are all daughters and mothers of the Middle East. We have created a place for friendships, businesses and culture to flourish,” she says.

What started as a small online forum grew organically and several virtual meet-ups and socially distanced in-person meetings were held in Dubai and Israel amid the pandemic. “Fleur and I hosted 10 online forums last year on diverse topics, such as women in media, Israeli and Emirati cultures, and a challah-baking session with our Emirati sisters who were curious to learn to bake traditional Jewish bread (used during sabbath),” remembers Justine.

More events are in the pipeline this year involving women from Israel and the Arab world focusing on technology, finance, healthcare, media and other sectors. “As a representative of Jerusalem, I’m more excited at the potential for my city as a tourist and technological hub,” points out Fleur. “For the uninitiated, Jerusalem has almost 40 per cent Arab population. It’s important to involve East Jerusalem Arabs in the Israel-Gulf normalisation process because they will benefit tremendously from this in several ways. East Jerusalem can be a natural bridge between Israel and the Gulf because of shared language and culture.”

Fleur envisions East Jerusalem as the “back office” of the Middle East. “Plans are afoot in bringing Fortune 500 companies to open their research and development operations for the Middle East in East Jerusalem, which will offer financial incentives and opportunities for the Arab-speaking workforce,” she says.

Similar enthusiasm about the Forum is also exuded by Ariella Steinreich, senior vice-president of Steinreich Communications, who — along with her team — has been taking the lead on helping Israeli and Gulf companies communicate with their new friends and explore business opportunities in each other’s markets. “What makes the Abraham Accords different from past peace deals is that this time around, the people in all three countries were incredibly supportive. They’ve taken to social media to share their excitement and to meet people in the other country,” she says.

Steinreich cites the overwhelming response to a virtual Women in Media event that the Forum had organised in November where women journalists from three countries addressed participants about their experience of covering the accords and their hopes for the region.

“Journalists played an integral role in the historic Abraham Accords, they helped educate the public on the positive impact this would have on the economic and social levels,” she says. “This event allowed participants to hear directly from some of the journalists who were at the fore.”

Justine, Fleur and Ariella are bound by a common goal — to act as a bridge between Israeli and Arabian Gulf women. They are successful career women, who want to radiate peace and prosperity among women in the region.

KARACHI: The England women's cricket team will travel to Pakistan for the first time in October this year for a limited-overs series when the men's side will also be here for a white-ball series, the PCB announced on Thursday.

The England women will play the two T20Is as double-headers alongside the men's team on October 14 and 15 while the ODIs will be played on October 18, 20 and 22 October at the National stadium in Karachi.

The men's side will tour Pakistan for the first time since 2005.

"World champions England accompanying their men's side for their first-ever tour to Karachi is an extremely powerful and strong announcement for Pakistan, our women's cricketers as well as for the global sport," PCB (Pakistan Cricket Board) Chief Executive Wasim Khan said in a statement.

"Women's T20Is taking place before the men's matches at the iconic National Stadium will mean more eyeballs will follow these matches than ever before.

"The three ODIs against the world champions will assist the Pakistan women's side to access, gauge and fine-tune their ICC Women's World Cup 2022 preparations as they aim to produce improved performances than in the past," he added.

"The England Women's cricket team has never toured Pakistan before so this is another important step in our history and journey.

"Not only will this be a cricket tour that provides valuable competitive opportunity to both teams, it should also serve as another powerful and positive message as we drive forward our equality ambitions for more women and girls to derive empowerment through the sport," Connor added.

Kabul [Afghanistan], January 7 (ANI): Indian embassy here on Thursday announced the completion of a high-impact development project on increasing the economic opportunity for Afghan women through handicrafts in Ghor province.

In November last year, India had announced a new phase of over 100 high-impact community projects in Afghanistan worth USD 80 million (Rs 592 crore).

On November 24, External Affairs Minister S Jaishankar had attended the 2020 Afghanistan Conference and announced Phase-IV of the High Impact Community Development Projects in Afghanistan, which envisages more than 100 projects worth USD 80 million that India would undertake in Afghanistan.

India's development portfolio in Afghanistan has to-date amounted to over USD 3 billion, according to the Ministry of External Affairs (MEA) had said.

Jaishankar had highlighted during the conference that no part of Afghanistan today is untouched by the 400 plus projects that India has undertaken in all 34 of Afghanistan's provinces. More than 65,000 Afghan students have also studied in India.

India has invested heavily in peace and development in Afghanistan and believes that the gains of the last two decades must be preserved and the interests of minorities, women and vulnerable sections must be ensured, the MEA had added. (ANI)