• Women's Cricket in Afghanistan Will be Streamlined, Says ACB Chairman

• Women Protest the World’s ‘Silence’ Over Crisis in Afghanistan 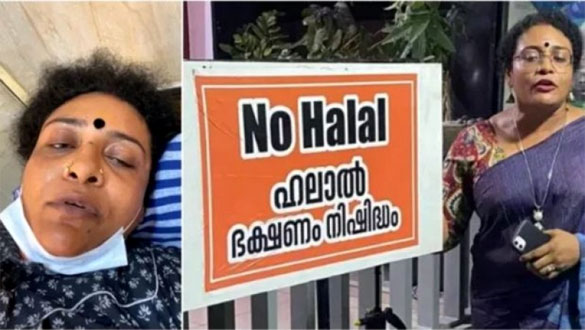 Kochi: A woman named Tushara Ajit, who opened a special non-halal restaurant in Ernakulam district of Kerala on January 15, 2021, is reported to have been fatally attacked. She was attacked on Monday, October 25. The woman has made Facebook live from the hospital bed and informed people about the attack. Mrs Tushara feeds only non-halal food at her restaurant called Nandus Kitchen in Palarevattom.

During the inauguration of the restaurant, she put up a banner outside, which read, 'Non-Halal, Halal Bakshanam Nishidham (Halal food is banned here).' During that time, many Muslims objected to the running of non-halal restaurants. Tushara's daughter also shared a video of her mother being taken to hospital in an ambulance. In this, you can see how cruelly Tushara has been beaten up by the miscreants. According to local news reports, the woman, who was about to open another branch of her restaurant today, was fatally attacked in Teco Park. The report suggests that Tushara was receiving threats from radical Muslims to open another branch of her non-Halal restaurant. Just as she get when she opened the restaurant. The fundamentalists were threatening her against putting up non-halal boards.

Mrs Tushara also revealed in her Facebook Live that she was brutally beaten up for serving non-halal food in her restaurant and putting up its banner outside it.

Condemning the attack, Kerala BJP unit president K Surendran tweeted, "Strongly condemns the attack on Mrs Tushara Ajit. A group of Muslim fundamentalists brutally attacked the woman entrepreneur for not accepting the Halal Hotel. What happened in Kakkanad is nothing short of a Taliban act. I appeal to the people of Kerala to boycott Halal.''

THE ORGANISER of a seminar aimed at increasing female participation in Islamic religious institutions intends to continue her work after the success of a day-long workshop.

Speaking to Asian Image, she said: “We have been approached by many motivated women who wish to be active participants on their local mosque committees. Our aim is to advise and support them and offer a place where they can share good practices. “Those committees which place greater emphasis on diversity, which includes working towards a better gender balance, are more reflective of the communities they serve. "They bring with them a different perspective and can draw on different resources, therefore able to provide various services outwith prayer and Quran classes. I’m referring to mother and toddler groups, counselling, leisure activities to name a few.”

Dr Dar added that some of those who participated in the training had approached imams at their local mosques, highlighting the significance of “inclusivity”, along with the importance of increasing provisions for females and young women. She concluded with: “From my research and experience it was those mosques that had active female participation that quickly responded to challenges of Covid.”

Shaukat Warraich, CEO of Faith Associates, led the workshop in Glasgow (Sept 04). He covered a number of subjects, including the impact of the pandemic on Islamic places of worship, along with those mosques which had gained Beacon status.

He believed that those mosques which “quickly adapted” went on to “survive and thrive” due to the “emergence of new diverse leadership”. He added that the Muslim community had “stepped up” during the pandemic by becoming “focal points” in their local communities.

He explained: “Mosques have served entire communities and not just local Muslims and that’s the role of a mosque, serving all of humanity. They have set up food banks, provided provisions for asylum seekers and refugees, and acted as vaccination centres. I feel that from a non-Muslim perspective, the perception of mosques has totally changed.”

Women's Cricket in Afghanistan Will be Streamlined, Says ACB Chairman

Since the Taliban took over the reigns in Afghanistan, there have been plenty of questions about how things would function in the country, including sport.

One of the concerns, apart from getting women athletes to safety first, was the future of women’s cricket. The men’s team are currently in UAE for the T20 World Cup.

On Sunday, Afghanistan cricket chief Azizullah Fazli told AFP on Sunday that "women's cricket will be streamlined" under the new regime.

"Some people talk about our policy on women's cricket, for them my message is just wait," said Fazli.

"Our government is streamlining things and women's cricket will also be streamlined."

Earlier, during their first stint in power in Afghanistan, the Taliban had banned most forms of entertainment and converted stadiums to execution venues. Women’s sport was banned as well.

The ICC are understood to be monitoring the matter and are also expected to discuss it during their next meeting in Dubai next month.

The head of the Afghanistan cricket board, who had also been in the same post three years ago, said that the sport had given the country a new identity.

"Cricket unites the world so we talk about unity of the cricket world," said Fazli.

"Cricket has given us an identity and we are getting better and better."

He also said that they were building infrastructure and hoped to host international cricket in the future.

Recently, the Australian cricket board too had threatened to not play their Test match against Afghanistan in November if women’s cricket wasn’t given its rightful due.

ICC rules too dictate that all member nations to have men’s and women’s teams.

PESHAWAR: Religious leaders from across Khyber Pakhtunkhwa here on Monday expressed their resolve to promote the rights of girls, women and all vulnerable segments of society.

They were speaking at a dialogue on ending child marriages jointly organised by the Council of Islamic Ideology (CII), Women Parliamentary Caucus (WPC) and Child Welfare and Protection Commission, according to a statement issued here.

Speaking on the occasion, CII Chairman Dr Qibla Ayaz said religious leaders from across Pakistan were invited to join them in the campaign to end harmful social practices like child marriage through awareness and behavioural change.

Qamar Naseem, programme coordinator of Blue Veins and lead of the Provincial Alliance to End Early Child and Forced Marriages, said every citizen had a responsibility to discourage child marriages, to ensure that children completed their education and reached their full potential.

Madiha Nisar, vice-chairperson of WPC, said keeping girls in school was one of the best ways to prevent child marriages. “Child marriage limits girls’ access to quality education,” she added.

Women protest the world’s ‘silence’ over crisis in Afghanistan

KABUL: Women activists in Kabul held up signs that read “why is the world watching us die in silence?” on Tuesday, protesting the international community’s inaction on the crisis in Afghanistan.

Around a dozen women risked the wrath of the Taliban, who have banned demonstrations and shut them down using violence since taking power in August, holding banners affirming their “right to education” and “right to work,” before the Islamists stopped the press from approaching the march.

“We are asking the UN secretary-general to support our rights, to education, to work. We are deprived of everything today,” Wahida Amiri, one of the organizers for the Spontaneous Movement of Women Activists in Afghanistan, told AFP.

Their demonstration, addressing the “political, social and economic situation” in Afghanistan was initially planned to take place near the UN mission in Afghanistan (UNAMA).

But it was moved at the last minute to the entrance of the former “Green Zone,” where the buildings of several Western embassies are located, although most of their missions left the country as the Taliban took control.

Taliban gunmen at the entrance to the ultra-secure area initially asked the demonstrators and the press to move away.

An AFP reporter then saw a reinforcement of a dozen Taliban guards — most of them armed — push back journalists and confiscate the mobile phone of one local reporter who was filming the protest.

“We have nothing against the Taliban, we just want to demonstrate peacefully,” Amiri said.

Symbolic demonstrations by women have become a regular occurrence in Kabul in recent weeks as the Taliban have still not allowed them to return to work or permitted most girls to go to school.

Last Thursday about 20 women were allowed to march for more than 90 minutes, but several foreign and local journalists covering the rally were beaten by Taliban fighters.

Some of the biggest names in women’s golf will head to Saudi Arabia in November for back-to-back Aramco Saudi Ladies International and Aramco Team Series Jeddah tournaments.

The two events will take place at Royal Greens Golf & Country Club in nearby King Abdullah Economic City and, together, form the Kingdom’s debut Women in Sport Season.

Leading players on the Ladies European Tour will compete for a total of $2 million in the space of a fortnight.

First up is the Aramco Saudi Ladies International (Nov. 4-7), presented by the Public Investment Fund, in which almost 100 players will go head to head for a share of $1 million in prize money.

The final of four Aramco Team Series events — launched on the Ladies European Tour for the first time this year — will take place from Nov. 10-12, with the Jeddah leg following tournaments in London, Spain and New York.

The new format sees three professional players team up with an amateur player and then compete for a share of $800,000, with the best individual scorers also battling for a $200,000 prize fund.

The individual category of this month’s New York leg was won by England’s Charley Hull, who returns to Saudi Arabia after competing in last year’s debut tournament.

Speaking after her win in New York, the 25-year-old Hull said: “I’ve loved the Aramco Team Series and played in every event so far — London, Spain, New York and Saudi Arabia is now next. I can’t wait. I played in Saudi last year and thought it was a great event. The golf course was lovely, so I’m really looking forward to getting back.”

She added: “The Aramco Team Series isn’t just a great event for the women on tour, but also for the amateurs who get to play and the fans who get to watch. It’s a lot of fun. For me, it will be great to get back to Saudi, especially with the support Golf Saudi and Aramco are giving the sport. Since last year’s first event I’ve heard that a lot of young girls out in Saudi Arabia are taking up golf, which is so good to hear.”

Joining Hull at Royal Greens will be Denmark’s Emily Kristine Pedersen, who recorded a clean sweep in the Kingdom last year when she won the Aramco Saudi Ladies International presented by Public Investment Fund, then both the team and individual elements in what was then the Saudi Ladies Team International, the precursor to the Aramco Team Series.

“Last year was such a fantastic experience for me in Saudi Arabia,” Pedersen said. “I loved the course, the weather, the people were so nice, and it was just a great 10 days. I obviously have such fond memories so going back will certainly be special for me.”

“The Aramco Saudi Ladies International felt like a big moment in women’s golf — something the Aramco Team Series has really built on this year, building our game even further. I’ve really enjoyed all three ATS events so far this season, and I know the final one in Jeddah will be awesome, too.”