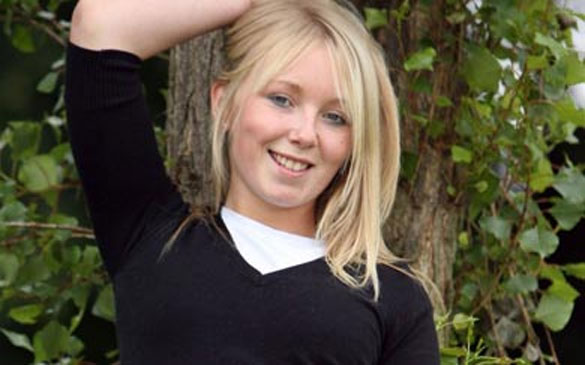 Photo: Miners says she is only interested in the Middle Eastern state because of the humanitarian crisis plaguing its children

•  UK Woman's Hijab Ripped Off In Hate Attack in London

She was quizzed by police for alleged offences under the Terrorism Act 2000 after repeated warnings about contacting jihadi’s online.

A spokeswoman for the North East Counter Terrorism Unit said:  “As part of an ongoing investigation, officers have arrested a 27-year-old woman from Bradford on suspicion of the possession of terrorist material.”

Last month she was found to be communicating with a sick ISIS jihadi in Syria and he was understood to want her to leave the UK and join the twisted group’s ‘caliphate’.

Miners appears on social media under the alias Aisha Lauren al-Britaniya and has posted images of Muslim women brandishing rifles and other weapons.

Pictures show her fully veiled or with only her blue eyes on display, but in public she wears skinny jeans and leaves her long blonde hair uncovered.

Miners revealed on Friday that she had travelled to Turkey – the most common springboard for Syria – on two previous occasions and planned to visit the country again this autumn, although she denied wanting to marry a jihadist.

It is understood that her activities, which include “liking” and sharing ISIS videos, have triggered an investigation by anti-terrorist police and MI5.

They have spoken to her up to four times and referred her to an anti-radicalisation programme. She has been warned that she faces arrest if she continues to engage in extremism.

Miners insists that she disagrees with ISIS beheadings and said she was primarily concerned about the plight of Syria’s refugee children.

However, the former model admitted being in direct contact on Facebook with an ISIS recruiter called Abu Usamah al-Britani.

The fighter appears to be brazenly using social media to groom a new generation of jihadist brides from Britain and the West.

In one message last week he posted an image of a kitten wearing a suicide belt along with a caption threatening bombings against Shi’ite Muslims. Miners responded with a string of jokey emojis.

Miners, who comes from a Christian family, first appeared in the national media in 2009 when she was juggling her job as a street cleaner in Bradford with a fledgling career as a topless model.

She said: “People think it’s really odd that I can be something so glamorous yet do something so dirty by day but I love it.”

Her transformation is thought to have begun about a year later when she was deeply affected by the death of her father, Anthony, in a freak drowning.

A relative said that “she never recovered from it.”

Miners appears to have found solace in the company of Muslim friends, including another white convert.

She said her interest in Islam was sparked last year, adding: “I found peace through it all,” Miners said from her semi-detached home.

She said she twice visited Turkey on “holiday” last October, but indicated that she had ended up in a refugee camp close to the Syrian border.

Miner added: “I remember seeing a three-year-old and a little baby at the side of the road.

“I felt like I needed to carry on telling everyone this is what’s really going on. I just want to help them children … it’s so sad what they’re going through.”

Her interest in the Syrian civil war, however, has progressed to watching and sharing violent Isis videos under her “Aisha al-Britaniya” alias on Facebook.

Asked if she supported Isis, she added: “We get told that they are there to protect the religion. I don’t really know – that’s what’s got me into trouble.”

And she admitted she was in contact with Abu Usamah last month.

Miners added: “He was saying, ‘If you can leave England, then just leave.’”

UK Woman's Hijab Ripped Off In Hate Attack in London

LONDON: In a racially-motivated attack, a young woman's hijab was ripped off on a busy London street in broad daylight, prompting Scotland Yard to launch a probe into the assault.

The force is treating the incident in north London as a racially motivated assault on the victim in her 20s, who was described as "shocked and distressed" by the incident.

"This was a shocking attack in broad daylight in the middle of a busy street. Racially and religiously motivated crimes will not be tolerated. I would appeal to anyone who witnessed this attack to contact police," said Detective Constable Ben Cousin of the Metropolitan Police's Haringey Community Safety Unit.

The woman was walking with another female friend on the evening of September 28 when the attack took place.

As they crossed the road, she was approached from behind by two men.

The Met police said one of them pulled down the hijab she was wearing before both fled the scene.

The first suspect is described as white, in his late 20s or early 30s, with blonde or ginger shaved hair and stubble.

Police said he was about 5 feet 6 inches and wearing a burgundy hooded top and carrying a Tesco bag in his right hand.

The second suspect was of Mediterranean appearance, in his late 20s or early 30s, and clean shaven, with spiky hair. He wore a grey hooded top.

The foundation grants awards to “people and organizations working for a world free of discrimination, racism and violence, and through their initiatives inspire and encourage others to support their cause and ideals,” according to a press statement.

“It’s a great honor for us to receive this award because the other groups and people honored by the foundation did such courageous and inspiring things. It feels good to be in their company,” Mika Danny, the choir’s founder and conductor, told ISRAEL21c.

The award organizers said Rana Choir “proves the power of shared creation and song to foster intercultural dialogue and to form deep human relationships despite political differences, and with their singing are voicing their call for peace.”

The choir sings in a range of languages, including Hebrew, Arabic, Yiddish, Persian, and Ladino, and attracts members from equally diverse backgrounds. “Although no two women here vote for the same political party,” Danny told Haaretz in April, “we all share a belief that peaceful coexistence is not only desirable but possible, and what better proof than we.”

Among the other award recipients were a group in Ghana advocating against female genital mutilation; a Syrian refugee-turned-Olympic swimmer who jumped out of a sinking refugee boat on its way to Greece and pulled it for four hours toward the shore; a couple from Iraq who rescue Yazidi women kidnapped by ISIS; and athletes, teachers, and civil servants from Croatia and Slovenia who organized a volleyball game across a wired fence erected to prevent immigrants from crossing over.

Rana Choir will appear in nine concerts across Israel with the Andalusian Orchestra next January.

H E Maitha bint Saif al Mahrouqi, undersecretary in the Ministry of Tourism (MoT), has been awarded the Golden Shield of Excellence by the Arab Women’s Council.

She has been awarded for her outstanding role in the tourism sector. The shield was presented at the 2016 award ceremony in UAE, which honoured top female achievers in the region.

H E Maitha was recognised for her efforts in leading the tourism sector in the sultanate as well as her role in the 2040 tourism strategy for the sultanate, stated a press release.

The ceremony coincided with the second regional social responsibility summit, which was titled, 'Women: The leading partners in development and growth', and was overseen by leading figures in the Arab world.

The council looked at different aspects when choosing the winners of the awards, including understanding the principles of social responsibility and the socio-economic roles that their duties affect and making a prominent impact in those areas. The chosen candidates also displayed an interest in developing the role of women within society and becoming worthy role models within their industries.

H E Maitha has also displayed the vast potential that women in the Arab world can aspire to become, and thus was the perfect candidate to receive the Golden Shield award, added the release.

The two-day Arab Women’s Council discussed the mechanisms needed to empower women in overcoming challenges facing them in today’s professional environment. Leading women from different government and private sectors as well as scientists and experts spoke about the practical mechanisms that enable women to take on leadership roles and flourish in their environments.

The Arab Women’s Council aims to transform this platform to one that can be used to exchange expertise, ultimately developing social responsibility and the role of women across the Arab world.

The summit was attended by prominent personalities in the Arab world, from both government and private sectors, as well as the biggest names in the media.