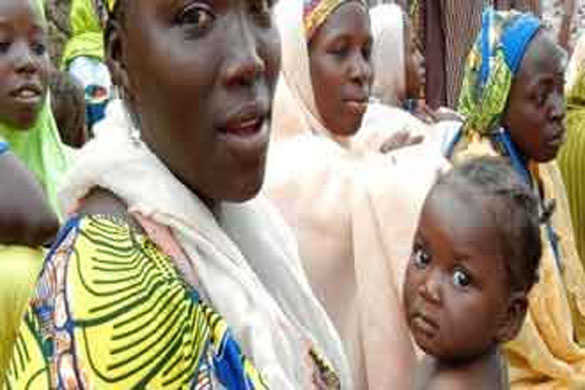 •  "I Will Serve Community as There Are Few Muslim Women Doctors" Says Arshiya, Second Ranked In Maharashtra Medical Entrance

LAGOS, (AA): A Nigerian court ruled on Friday that Muslim girls can wear a headscarf to school as long as its colour is the same as the approved uniform.

“Hijab is a matter of [the] fundamental right of freedom of worship and the Muslim children have a right to it without fear of molestation,” Justice Jide Falola said in a 51-page ruling.

The court was ruling on a suit filed by Osun state’s Muslim community, challenging a government decision to disallow the use of Hijabs – head-coverings worn by female Muslims — in public schools.

This ruling — subject to appeal up to the Supreme Court — applies only to government schools in the state including missionary institutions the government has acquired since 1975.

South-western Osun state was engulfed in a serious crisis in 2013 after Muslim students wearing the hijab were asked to leave a Baptist school, one of the colleges long acquired and funded by the government.

A similar situation is playing out in south-western Lagos state, although a high court there ruled that the government was right not to permit the Hijab. Local Muslims rejected that ruling and have filed an appeal.

The Muslim Students Society of Nigeria has hailed the Osun ruling, saying it “upholds the supremacy of the constitution”.

The government of Osun has yet to comment on the ruling. It is not clear if an appeal will be filed.

The Government has slapped 20 new terrorism charges on four Muslim women with alleged ties to Al-Shabaab. One suspect has been linked to two controversial mosques in Mombasa.  Maryam Said Aboud, Khadija Abdulkadir Abubakar from Malindi and Ummul Khayr Sadir Abdalla from Tanzania were arrested on March 27 last year in El-Wak, Mandera County, according to police. It is believed the suspects were trying to cross the border into Somalia to join Al-Shabaab. The fourth suspect, Halima Adan Ali was nabbed in Machakos on April 3 2015, while, allegedly, travelling to Mombasa. Yesterday, the State linked Khadija who was studying Pharmacy at Mount Kenya University in Thika until her arrest, to Musa and Sakina mosques in Mombasa’s Majengo slums. The State claims Khadija engaged in preparation for a meeting at Musa on February 2 2014 and Sakina on November 9 and “the agenda of the meeting was to be  in furtherance of the activities of a terrorist group...,” in the new charge. State prosecutors say in the new charge that the woman disseminated information of the two alleged meetings.

The new charges, according to the State stem from electronic data police gathered from the suspects’ cellphones and laptops. The charges were presented before Mombasa Chief  Magistrate Douglas Ogoti. Ogoti said he will not allow any further delay of the case once it commences hearing after the defence said prosecution has been producing piecemeal evidence in court. State prosecutor Ngina Mbua said reports from the Anti-Terror Unit had established that each of the four girls had links in Somalia and intended to produce the Forensic Expert and the Investigating Officer as the last witness in the case that has dragged for a year. Ngina said the new development was the final document they were presenting to the courts before the commencement of pre-trials. However defence lawyer Richard Chacha said police did not seek court's order to infringe on the privacy of the accused phones to extract  the information they used to produce a report that led to their charges. “We oppose the production of the report against Ali as it violates the right of the accused privacy because there was no court order to infringe on her privacy,” said Chacha. The women have been in custody at Shanzu Maximum Prison since despite court orders freeing them on bond. A defiance petition for contempt of court for failure free them is pending. They were originally charged with two terrorism crimes that soon increased to eight and have now been amended to create 20 separate charges. The case will proceed with hearing of the forensic report expert and Investigation Officer on July 5 and 6.

"I will serve community as there are few Muslim women doctors" says Arshiya, second ranked in Maharashtra Medical Entrance

Solapur: It was a moment of joy and ecstasy for 18 years old Arshiya Choudhari of Solapur when she was announced second topper in Maharashtra state conducted Common Entrance Test MHT-CET 2016 for admissions to Medical courses and can now choose college of her choice for MBBS admission.

The Maharashtra Common Entrance Test (MH CET) exam was held on May 5, 2016 for which results were declared on Wednesday.

The feat is very special for Arshiya because she herself prepared for the exam by dedicating 6-7 hours daily for study at home after HSC exams. “I did not join any private classes but  relied upon self study at home. I am happy that I could score this much and prove people that private coaching is not always required if you have dedication”, Arshiya told  TwoCircles.net.

She is now aiming to complete MBBS course and then she will decide about specialization or masters.

“I want to pursue MBBS from KEM College in Mumbai. After completing degree I will decide whether to go for administrative services or masters”, She added.

However, in any case she wants to connect with the people and serve them. “I am very eager to serve people. I see there are very few Muslim woman doctors and therefore I decided  to become a doctor”, she told when asked why she chose to become a doctor.

Speaking with TwoCircles.net Yunus Choudhary, father of Arshiya expressed delight and said she is free to take admission into the college of her choice.

Yunus, who is a Jr. Engineer in water supply department in Solapur told, “I was confident that she will clear CET with excellent marks as she is a hard working girl. I will not restrict her  from joining any college for MBBS”.

Nusrat, mother of Arshiya is a practicing doctor and wish to see her daughter serving the community by becoming a doctor. “I want Arshiya to become a successful doctor”, she told.

The Maharashtra Common Entrance Test (MH CET) is an entrance examination conducted by the Directorate of Medical Education and Research with an intention to provide admissions  into various graduation courses for Engineering and Medicine streams.

The medical entrance examination has been in news since May 4 when a Supreme Court order made it mandatory for medical aspirants to take the National Eligibility-cum-Entrance Test  (NEET). However, following several protests from parents and state education ministers, the President passed an ordinance that reversed the Supreme Court verdict partially.

Therefore for Maharashtra, admissions to medical and dental colleges will be done through the MHT-CET scores for this year.

Ms Maliha Hassan has been appointed as the deputy finance and administrative chief in the Afghan Attorney General Office.

She has served as the lecturer in Kabul University where she was teaching law, political science and international relations.

Born in 1970 in Kabul, Ms Maliha completed her higher school education in Rabia Balkhi high school and has served in different sectors, including as commissioner in adminnistrative  reforms and civil services.

She has also served with the United Nations Assistance Mission in Afghanistan, United Nations Development Program, UNHCR, and other institutions, according to her biography.

This comes as the government of national unity promised to step up efforts in a bid to empower the women and increase their role in the leadership level of the government.

The government also introduced the first woman Anisa Rasouli to gain membership in Supreme Court of the country but she was rejected by the Afghan lawmakers.

Ramadan — the Muslim holy month, which begins this year on June 6 — is a time of fasting, prayer and community. For some, it has also become a time to shop, when some wealthy  families as much as triple their spending at department stores — a trend many clothing brands have picked up on in recent years.

For the tenth year in a row, Spanish fashion company MANGO released a Ramadan-inspired collection on May 30 tailored to Muslim women. The collection features long dresses, loose- fitting wraps and calf-length skirts intended, as the brand said in a press release, to meet “the everyday work and leisure needs of women during major festivities such as Ramadan.”

Although the majority of the world’s Muslims live in South and Southeast Asia, MANGO’S collection specifically targets Muslim women in the Middle East and other Arab countries, said the brand’s public relations representative Idoya Noain Ruiz.

“The collections are designed having in mind the particularities and preferences of the Middle Eastern market, that match women’s demand on quality and detail, as well as richer fabrics  and embroidery,” Noain Ruiz told The Huffington Post.

The styles included in the collection are elegant and relatively modest, but to some Muslim women the designs might seem like a strange representative of Ramadan fashion. None of the  models depicted in the company’s press photos are wearing a hijab or any other kind of headscarf, which many — though not all — Muslim women wear.

“I’m MANGO’s biggest fan, but I have to say, I was underwhelmed with their Ramadan collection,” Muslim fashion blogger Hassanah El-Yacoubi told HuffPost.

Most of the pieces would need to be altered to be suitable for a woman who wears hijab, she said, “which kind of defeats the purpose of a Ramadan line, doesn’t it?”

El-Yacoubi also bemoaned what she saw as excessive “sleeve cleavage” in the designs.

“Hijabi women struggle the most when it comes to long sleeve maxi dresses so why not take this opportunity to offer multiple covered dresses and tops for that matter?” she said.

Muhammad Ali has been married four times - and has had to square up to more than one of them during their feisty relationships.

His first wife, who he married in 1964, Sonji Roi, left him after little more than a year of marriage, claiming that he had coerced her into adopting Muslim dress and customs.

After the divorce, she complained that Elijah Mohammad’s Nation of Islam had “stolen” Ali’s mind and threatened her with reprisals.

She was quoted as saying: “I wasn’t going to take on all the Muslims. If I had, I probably would have ended up dead.”

In 1967 he married Belinda Boyd, who converted to Islam and changed her name to Khalilah Camacho-Ali after their wedding.

It was the same year he refused to be inducted into the Army and was immediately stripped of his heavyweight title .

Khalilah was a 17-year-old bride, and went on to bear him four children Maryum, born a year later, Jamillah and Liban, both born in 1970, and Muhammad Ali Jr., who arrived in 1972.

Veronica Porsche and Ali tied the knot in 1977 and became his third wife.

She is the mother of his two daughters, Ali and Porsche had begun a relationship in 1974 while in Kinshasa, Zaire when Porsche was 18 years old.

She was one of the four poster girls who had promoted the Rumble in the Jungle fight in Zaire versus George Foreman.

Porsche and Ali were then married in Los Angeles and divorced in December 1986.

He has nine children, most of whom have chosen to avoid the spotlight of which Ali was so fond.

One of his daughters, however, Laila Ali, is pursuing a career as a professional boxer.