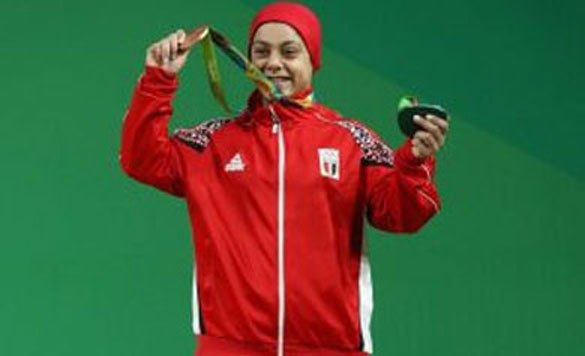 •  Read What Muslim Men Look For In Women

•  This Woman Got Married To Become a Housewife, but Her Family Made Her a Hero

Muslim women are not new to the Olympic Games as they have always participated and competed fiercely in the games, however, their presence this year is probably more obvious as more Muslim women athletes chose to wear their Hijab during the competitions.

Ibtihaj Mohammed competing in fencing made the record of being the first American Muslim woman to compete with hijab, also Egyptian beach volley team also were the first to compete with hijab on in this game. Sara Samir Ahmed, is 18 years old Egyptian weight lifter who won bronze, she is probably the youngest of all Muslim women with hijab in the Games along with Hedaya Wahba, who earned her bronze in taekwondo are among those who competed in the Olympics with their Hijab. Dalilah Mohammed is another American Muslim women athlete won the Olympic medal in 400 m running in track and field, though not wearing a hijab but is the first

I believe it meets one of the objectives of the Olympic Games which is to celebrate all cultures and differences while competing in sports. Additionally it shows that it is about the athletic standards of each kind of sport more than who is competing. This is an open competition and winning is for the more professional and ready to earn the title. However participating in the games is not only about winning, it is rather about exerting your best to represent your country and join the international community, some may not win today but at least they show that they are qualified to compete and there may be more chances in the future. it also may help eradicate one of the main misconception and stereotyping against Muslim women that they are oppressed and denied equal opportunities in their countries because of their religion. While this may be true in some cases, international gatherings like the Olympics may help increasing the awareness of opening more doors for women and whether Muslims or not.

Far beyond the Hijab, the message of diversity and inclusion of the Olympic games. We are looking forward to more inclusion and diversity and probably more representation of different cultures in the coming Olympics.

If you ever find yourself in Scotland, and you see women cops wearing Hijab. Won’t you feel liberated? Many will indeed. The Scotland Police has announced Hijab to become part of the official uniform in order to promote policing as a career option to Muslim women. The officials aims to have diverse force to join in the police service.

Read What Muslim Men Look For In Women

Men generally have a list of qualities they want their partners to possess or conform with if a marriage ever gets considered. An average man in the society pay no attention to the values a woman possess; that is why it is possible for men to pick up strangers and marry them within a very short time.

This Woman Got Married To Become a Housewife, but Her Family Made Her a Hero

Like most Indian women, Afroz Jahan thought that her life would change after marriage. She thought that she would be bestowed with every responsibility that is normally expected from a housewife - right from managing a household to looking after her in-laws. Though things turned out as she had expected, there was another unexpected way in which her life changed.

Muslim siblings were removed from a plane in London after a passenger accused them of being ISIS members upon allegedly seeing Arabic on their phone. A similar incident in April saw a Muslim student removed from a flight for speaking Arabic.