Muslim Woman Slapped for Not Wearing a Hijab in Malaysia 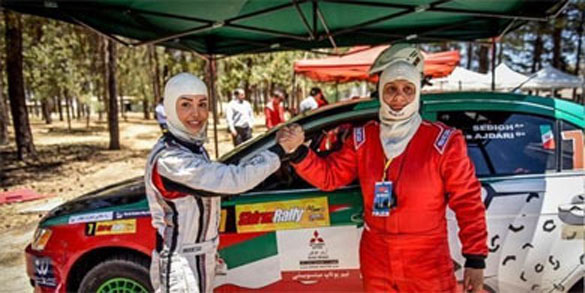 A rally racing competition for women of Muslim countries will be held this year in the city of Tabriz, north-western Iran

Muslim Woman Slapped for Not Wearing a Hijab in Malaysia

A video of a man berating and then slapping a Muslim woman for not wearing a hijab has sparked outrage in Malaysia.

In the widely shared clip, the unidentified man can be seen scolding a group of women sitting at a bus stop in Penang, MailOnline reports. The women were wearing trendy, modern clothing.

He then asked one of them about her faith and why she was not wearing a hijab. The headscarf is a veil usually worn to cover the head and chest by some Muslim women in the presence of adult males outside of their immediate family as a symbol of modesty and privacy.

When the woman responded she was a Muslim, and then explained that wearing the hijab “is our right” and a personal choice, the man suddenly slapped her face with the back of his hand. The outburst shocked the onlookers and the hundreds of thousands of netizens who later viewed the unprovoked assault online.

Before the clip ended, the woman can be seen standing up, apparently confronting her attacker.

Malaysia, which is a multiconfessional country, is home to about 19.5 million Muslims, which account for 61.3% of its total population.

While wearing the hijab is not mandatory for women in the country, some government buildings enforce a dress code which bans women, Muslim and non-Muslim, from entering while wearing “revealing clothes” within their premises.

Religious conservatism in parts of Malaysia and other Muslim countries also places an unofficial pressure on women to wear a hijab, regardless of whether it is mandatory or not.

The sources added that the militia is using force and financial incentives to recruit women as most of their finest trained fighters were killed since the war began.

The Houthis’ named the women’s battalions ‘al-Zainabiyat’, using their media outlets to occasionally broadcast videos of women training to fight in militia-controlled areas in Sanaa.

The sources added that female student dormitories are among the places targeted by recruitment campaigns run by female Houthis. Their families’ difficult living circumstances are used by the militia to lure them in by force or financial incentives, sources said.

But despite a concerted global campaign for their release, and talks between the government and the militants, the girls shown in the recording vowed not to return to their parents. The 20-minute-long video is the first since May last year, when another woman who also claimed to be among the 219 seized from the town in Borno state said she wanted to stay. Both videos will compound the suffering of the girls’ families and friends but also indicate the extent to which they may have become influenced by their captors.

All of those who were shown on camera were wearing black or blue hijabs and at least three were carrying babies. One of the students, her face covered by a veil, said: “We are the Chibok girls that you cry for us to return to you. By the grace of Allah, we will not return to you.

“Poor souls, we pity our other Chibok girls who chose to return to Nigeria. Allah blessed you and brought you to the caliphate for you to worship your creator.

“But instead you chose to return to unbelief.”

It was not clear when or where the latest message, in Hausa and the local Chibok language, was recorded or whether those who appeared on camera were under duress.

The woman speaking said the Boko Haram factional leader Abubakar Shekau had “married us off”.

“We live in comfort. He provides us with everything. We lack nothing,” she added.

Shekau was also seen, firing a heavy machine gun and making a 13-minute-long sermon in which he said the remaining girls had “understood the folly” of secular education.

Boko Haram’s name broadly translates into English from the Hausa that is widely spoken in northern Nigeria as “Western education is sinful”.

The group has repeatedly attacked and destroyed schools teaching a secular curriculum in its campaign to create a hardline Islamic state in northeast Nigeria.

The jihadists seized 276 students from the Government Girls Secondary School in the mostly Christian town on April 14, 2014, triggering global condemnation.

Fifty-nine of them managed to escape in the hours that followed. A campaign for the release of their classmates has had the support of Hollywood stars to global leaders.

A total of 107 girls have now been either found, rescued or released as part of government negotiations with the Islamic State group affiliate.

They have now returned to the northeast and are back in education at the American University of Nigeria, in the Adamawa state capital, Yola.

On January 4, the Nigerian army said it had rescued another of the girls’ classmates in the Pulka region of Borno, near the border with Cameroon.

Boko Haram has used kidnapping as a weapon of war in the conflict, which has killed at least 20,000 people in northeast Nigeria and displaced more than 2.6 million.

Thousands of women and young girls have been seized and held hostage, including as sex slaves, while men and young boys have been forcibly recruited to fight alongside the militants.

The video also shows a group of police women, who were also abducted in Borno state last year.

JEDDAH: Leading car-hailing firm Careem has had its eyes set on women from the get-go. The company took the initiative to support women’s driving, announcing it was accepting women’s applications for driving positions through its Twitter account only a few days after the ban was lifted, and it continues to do so today.

“From the very first moment, we’ve displayed our willingness to welcome ladies in our platform, and we’ve started training and on-boarding the Captainahs to work for Careem through our office in Alkhobar 14 days after the royal decree was issued. We are working to continue training females in the upcoming months in preparation to launch services dedicated to ladies and families only. Our goal is to register more than 10,000 Captainahs before then,” he said, adding that the company has received applications from thousands of females hoping to work for Careem, especially in major cities such as Riyadh, Jeddah and Dammam.

“The majority of our Captains, as to be expected, are young,” he revealed, giving a general idea on a typical Saudi Captain. “We have a remarkable number of retirees working with us, however. There are some who operate for more than eight hours a day, and we’re truly proud of that.”

“Today, we have more than 100,000 Saudi Captains. The large and increasing number of entrants is due to the fact that they can work any time in a platform that provides Captains with an additional income, not to mention the incentives and rewards we offer them. A small example is the new car we’ve introduced to the ‘Captain of the Month’ in Jeddah. These opportunities aren’t offered elsewhere.”

Some of the incentives Careem offers to motivate Captains and ensure limiting the number of dropouts include daily guarantees, according to Aldalooj. “We secure a fixed salary if the Captain works within a specified period in his city, based on market forecasts.”

Careem also offers many bonuses in cooperation with their partners, such as discounts offered to the Captains and their families.

On the process of becoming a Captain, Aldalooj said: “Candidates apply through an online application and then receive extensive training in customer service, Careem’s system and laws, with an emphasis on local traffic regulations. Before any Captain starts working for us, we collect their personal documents; check security records with governmental agencies, the vehicle’s validity and papers. We take pride in being the only platform in the region that undergoes such a process.”

In order to prevent any cases with regards to some Captains allowing strangers drive in their stead, Careem has partnered with “Digital Barriers” for its facial recognition technology to be incorporated in the Captain app, ensuring that the actual driver matches the authorized and accredited Captain.

TEHRAN, Jan. 15 (Xinhua) -- A rally racing competition for women of Muslim countries will be held this year in the city of Tabriz, northwestern Iran, Tehran Times daily reported on Monday.

Iran has been chosen as the host country for the event, scheduled to be held in September, Mahmoud Seydanlou, the head of Iran's Motorcycle and Automobile Federation, said.

Iran has negotiated with International Automobile Federation-FIA over the program and Tabriz has been selected to host the competition due to its status as the Islamic Tourism Capital in 2018, Seydanlou was quoted as saying.

Seydanlou said Iran will also hold a round of motocross competitions approved by the Asian Automobile Federation.

"Iran and a number of neighboring and Asian countries cannot take part in Formula One and Formula Two car racing, therefore the Asian Automobile Federation has provided the chance that each of these countries, including Iran, Azerbaijan and Turkey, hosts a round of these competitions on the regional level," he added.

JEDDAH — More than 9,000 women attended two Saudi soccer league matches last week after they were allowed to enter stadiums for the first time in the history of the Kingdom.

The attendance of women at the soccer matches also raised the performance of players on the field.

Many goals were scored during the match between Al-Ahli and Al-Batin while the Riyadh match was described to be the toughest so far played in the Saudi league which entered its 17th week.

The attendance of women also created some jobs for women as 254 of them were employed at Al-Jawhara Stadium to supervise the entry and seating of women spectators.

They received the women at the entrance, sold them tickets and seated them on the 14,000 seats designated for families.

There were 150 women organizers at the Riyadh venue under the supervision of Princess Reema Bint Bandar, undersecretary of the General Authority of Sports for development and planning.

As many as 7,500 seats were reserved for families at King Fahd Stadium.

Some 80 female medical doctors, paramedics and nurses were present to extend any required medical help to families.

A number of women security guards were also present during the two matches to ensure the safety of families.

Dubai: The emirate of Abu Dhabi has welcomed its first female Air Traffic Control (ATC) Officer; an example of how far Emirati women have excelled in various fields of expertise.

On Monday, GAL Air Navigation Services and Abu Dhabi Airports honored Mariam Al Remaithi for her achievement in obtaining her license and being certified as the first Emirati Female ATCO at Abu Dhabi Airports.

This initiative comes as a part of the companies’ support for the role of women and their desire to succeed in all fields, and in line with the UAE's efforts to enhance the role of Emirati women in all fields of work.

Al Remaithi is scheduled to join the team in Al Ain International Airport.