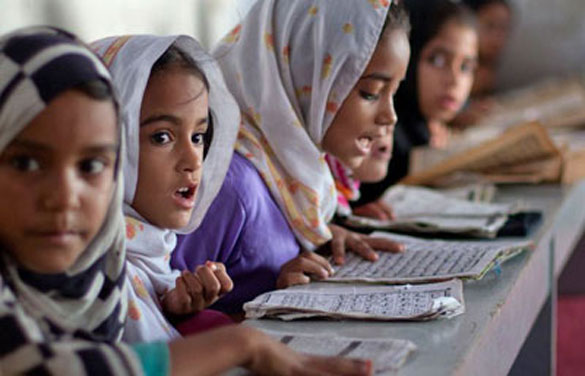 •  Emirati Student Gets 10 Years in Jail for Raping Tenant

•  Three Women Members in a Dubai Company Board

•  Nearly Three-Quarters of Pakistan Girls Not In School

Photo: Nearly Three-Quarters of Pakistan Girls Not In School

A feminist scholar at Harvard University has earned the 2013 Louisville Grawemeyer Award in Religion for explaining why a growing number of Muslim women in the United States are wearing veils.

Leila Ahmed, Harvard’s Victor S. Thomas Professor of Divinity, received the prize for ideas set forth in her book, A Quiet Revolution: The Veil’s Resurgence from the Middle East to America. Yale University Press published the book in 2011.

Louisville Presbyterian Theological Seminary jointly presents the award in religion with the University of Louisville. The University also presents four Grawemeyer Awards each year for outstanding works in music composition, world order, psychology and education. This year’s awards are $100,000 each.

Ahmed wrote the book after noticing that more and more American Muslim women over the past decade were wearing veils as they went about their daily lives.

Initially, she assumed that the change indicated a rejection of the women’s equality. However, after doing research she found the opposite to be true — some of the women were wearing the veil as a symbol of activism for justice and social change.

Ahmed interviewed young Muslim feminists, Arab nationalists, pious Islamic daughters, American Muslim immigrants and Islamic activists for her book. She discovered that in the context of contemporary American Islam, wearing a veil can represent a call for justice and equality.

“The book is an incredible eye-opener,” said Shannon Craigo-Snell, professor of theology at Louisville Presbyterian Theological Seminary, who directs the religion award. “It offers education, insight and hope."

Not only does Ahmed “explain the multiple meanings of the veil within the diverse traditions of Islam, but she argues that right now, in post-9/11 America, the veil is taking on new meanings in the interplay between Islamic activism and the American tradition of struggle for liberty and justice for all.”

Ahmed will present a lecture on her award-winning book at Louisville Seminary on April 10, 2013, at 7:30 p.m. in Caldwell Chapel.

Two housemaids have lodged a complaint with the Dubai Police against their sponsor, for alleged sexual harassment.

On Monday, the two Ethiopian maids, 22-year-old M.D. and 23-year-old A.H., told the police that their Emirati sponsor S.A., had been harassing them and after they refused his advances, he beat them up.

A month before they filed the complaint, M.D. said the man had harassed and beat her up. She told the officers that three days before lodging the complaint, the sponsor came to her room and threatened her after she told him she would tell his wife of his actions. He also threatened to kick them out and said he would kill them if they informed the authorities.

The police detained the suspect, but during the interrogation, he denied the allegations and alleged that the maids cooked up the story after he fired them.

Emirati Student Gets 10 Years in Jail for Raping Tenant

A 24-year-old student has been sentenced to 10 years in jail for the rape of a woman tenant.

The sentence was handed out by the Court of First Instance. The defendant had earlier denied the charge, claiming that he had gone to the victim’s apartment to collect the rent amounting to Dh3, 000.

The Emirati defendant earlier told presiding Judge Maher Salama Al Mahdi that he had rented out an apartment to the complainant and her friends. According to prosecution records, the defendant went to the victim’s apartment, on the pretext of wanting to talk to her.

The complainant, a clerk, told the prosecutor that the defendant was her ex-roommate’s boyfriend and he had called her that day saying he was very upset about the break-up and wanted to talk. That evening, they talked in her apartment for about 10 minutes and then she asked him to leave as it was late. But he grabbed her hand and pulled her closer to him. The Filipina tried to resist, but he forced her into having sex with him.

The complainant woke her roommates and told them that she had been raped. She later told her ex-roommate to go with her to the police station for help. The roommate, a 48-year-old compatriot saleswoman, said she knew the woman had been raped after she woke her up after midnight.

A police lieutenant quoted the defendant as admitting that he was guilty after the incident was reported to the Rafaa police station.

The report of the General Department of Criminal Evidence confirmed that the complainant was raped by the accused.

The crime took place in January. The verdict can be appealed within 15 days. —mary@khaleejtimes.com

Three Women Members in a Dubai Company Board

The Dubai Quality Group, or DQG, held its Annual General Meeting, or AGM, and elected a new chairman and its board members.

Dr Yousef Ebrahim Al Akraf, executive vice-president of Business Support at the Dubai Electricity and Water Authority, received majority votes from DQG members and was elected board chairman for a three-year term from 2013-2015. He will assume office in January.

As per the new constitution of the group, all board members exercise their duties for three years after which managers and active members of the group elect a new board.

The voting results have been announced at the end of the AGM, which highlighted previous years’ achievements, overview of the annual financial report, discussion of upcoming initiatives and different ideas of the DQG’s agenda.

The new board of directors includes Dr Abdul Rahman Al-Muaini of the Dubai Police as vice-chairman, Sunil Bahri of Kaizensox Consulting as secretary-general and Prashant Nasery of the Kanoo Group as finance director.

Three women were elected to the board: Fatma Al Mheiri of the Community Development Authority, Sevil Ermin of the Nielsen Company and Seza Vaziri of Xerox Emirates.

The outgoing chairman, Saleh Janeeh, welcomed the newly-elected board chairman and members. “Being a part of DQG has been one of the most important experience of my life where my work, achievements, aspirations and development completed with a spirit of quality and excellence. During all these years, our joint efforts made the Group touch unbelievable peaks. This was possible only with a wonderful team spirit. We knew that ambitions were still growing, so were the challenges,” he said in a speech.

“I am confident that our joint efforts will lead us to great heights, excellence and quality of business and practices in our emirates. And in Dubai, the city of everything new, we will work together as a team in order to complete the process of construction and excellence with efforts that do not know the impossible.”

Divisions at the heart of government over David Cameron's plans to introduce marriage equality have been highlighted after Lady Warsi warned that the legislation could have "unintended consequences".

In a letter to the equalities minister Maria Miller, Warsi raised concerns about the impact on churches and on teachers in faith schools if same-sex marriage were allowed to be held in churches.

KABUL, Afghanistan — Women who are victims of violence in Afghanistan are often afraid to report abuses to government authorities and rarely see their cases taken to trial, though prosecutors regularly obtain convictions when cases do go forward, according to a report released Tuesday by the United Nations office here.

The detailed study of the Elimination of Violence Against Women Act, enacted by Afghanistan in 2009, found that the use of that law had increased significantly, with prosecutions doubling, but still lagging far behind the growing number of complaints.

Nearly three-quarters of Pakistan girls not in school

ISLAMABAD: Nearly three quarters of young Pakistani girls are not enrolled in primary school and the number finishing five years in education has declined, a new UN and government report showed Wednesday.

The findings expose the miserable state of education for millions in Pakistan, where the Taliban shot 15-year-old Malala Yousafzai in the head in October to silence her campaign for the right to an education.

Pakistani women police cadets took place in a passing out ceremony in Karachi on Wednesday, 12 December 2012. Along with the men cadet, the women performed several stunts and took on obstacle training in the country’s biggest city, which is rife with violence.