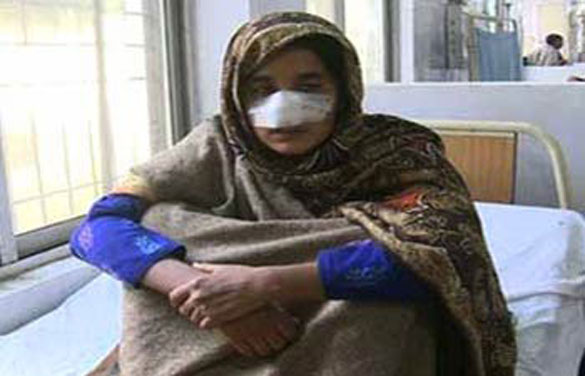 •  Dubai: Witness Claims Her British Friend’s Drink Was Spiked Before She Was Gang-Raped

•  Slow but steady?: Pakistani women in the public and political sphere Women’s Protection Draft to Be Tabled for Legislation, In Punjab Assembly, Pakistan

•  Schoolgirl 'Commits Suicide' After Being Rebuked By Elder Sister

•  Girl Commits 'Suicide' After an Altercation With Her Mother In Bangladesh

•  Lebanon’s Sidon in Shock over Killing of Elderly Woman

For the first time, women will represent 10 percent of the 150 seats of the Saudi Shura, or consultative council, in the coming legislative term, Xinhua reported.

The remarkable thing about the new council - the Saudi version of parliament - is that in Saudi Arabia's history women are joining as Shura members for the first time, sources told Elaph e-paper.

Saudi King Abdullah bin Abdulaziz Al Saud had announced in December 2011 that the next Shura Council would include women.

The Shura Council of Saudi Arabia is the formal advisory body of Saudi Arabia, an absolute monarchy. Though it cannot pass or enforce laws, a power reserved for the king, the assembly has limited powers in government, including the power to propose laws to the king.

It has 150 members, all of whom are appointed by the king.

Dubai: Witness Claims Her British Friend’s Drink Was Spiked Before She Was Gang-Raped

Dubai: A woman has claimed that her friend was kidnapped and gang-raped by more than three men after her drink was spiked while she was at a nightclub in Dubai.

“My 28-year-old British friend woke me up and cried when she revealed to me that she was locked up in a flat… maybe four or five men gang-raped her after someone spiked her drink when she was at the nightclub,” said a French woman when she testified before the Dubai Court of First Instance.

Two Iranian defendants, Y.J. and A.K., both aged 20, have denied tricking the 28-year-old British woman and taking her to a flat in Deira where they stripped her naked and raped her one at a time more than five times.

A third unidentified suspect, who remains at large, has also been accused of a role in the crime.

Giving a 90-minute testimony before presiding judge Maher Salama Al Mahdi, the French woman testified: “When she woke me up in the morning, she alleged to me that she was unaware of what was happening at first. Her memory was blacking out for short periods. She could remember bits and pieces of what happened and that she suffered severe pain in her rectum. She also claimed to me that while someone raped her, another person filmed the abuse.”

When asked by judge Al Mahdi whether the victim was drunk or drugged at the time of the incident, the witness replied that her friend had never got drunk.

“She claimed that somebody drugged her by spiking her drink. She has never got drunk since she started drinking. She claimed that she believed that her rapists were Indians,” the witness told the court.

Meanwhile the court heard the Briton woman’s statement behind closed doors in a previous hearing.

The British woman was very drunk, according to prosecution records, and completely blacked out when the defendants reportedly picked her up from a cab and took her to a flat where they raped her.

“We did not kidnap her or have sex with her against her will,” claimed A.K.

Y.J. was spotted nodding his head in denial when he entered his plea.

Prosecutors said the suspects abused the drunken state of their victim when they spotted her in the taxi. They were said to have told the cab driver that they knew the girl and that they would take her back to her place.

The defendants paid the taxi fare and drove the girl to their flat where they raped her one at a time. They were additionally charged with confining her inside the flat while they raped her.

The girl testified that the incident happened after she went to a pub and consumed three glasses of wine.

“I stopped realising what was happening around me. I only regained my consciousness around 6.30am the next morning. I felt severe pain in my private parts because one of the suspects had bizarre sex with me. I tried to stop them. One of them was also filming while the others raped me. I went to a friend of mine who took me to the police,” claimed the victim.

The Pakistani driver confirmed that the girl was very drunk and slept in the back seat of his taxi. He alleged that when she did not pay him, three men parked in front of him, paid him Dh100 and claimed that they would drop her home because she was their friend.

Islamabad: A Pakistani man, said to be a drug addict, allegedly cut off the nose of his former wife for divorcing him a year ago, Geo News said on Tuesday.

The attack reportedly took place in Faisalabad city on Monday.

Sajida Bibi said she married Faiz Rasool four years ago but divorced him last year as he was a drug addict and used to torture her. Faiz had allegedly been threatening the woman since then.

He kidnapped Sajida with help of an accomplice, tied her arms and chopped her nose and fled, the woman told Geo News.

Slow but steady?: Pakistani women in the public and political sphere

ISLAMABAD: Former premier Benazir Bhutto, Foreign Minister Hina Rabbani Khar and National Assembly Speaker Fehmida Mirza are part of a small, but significant, number of women who have marked their place in the country’s political arena.

According to a study by the Planning Commission and endorsed by the United Nations, Pakistan has made remarkable progress in giving decision-making roles to women – however, the progress remains slow.

In fact, the 2010 MDG Report for Pakistan also noted that “the 22.2% participation share of women in the National Assembly is much better than that for any other Asian democracy and even for several Western democracies, including the UK and the USA, as Pakistan has had a female prime minister, Parliament speaker, and most recently, a female foreign minister.”

The study says that in Parliament elected for 2008-2013, there are 76 women legislators, of whom 16 were elected on general seats. The devolution plan of 2001 introduced by former president Pervez Musharraf’s regime has brought in a remarkable number of women at local government levels, with 33% reserved seats for women at all levels in the new system.

Yet, discrimination against women is still witnessed in the civil services.

Another study by the Planning Commission suggests that none of the federal ministries was setting aside 10% of its positions for women, as required under the Constitution. Based on data from 16 federal ministries and the Planning Commission itself, the report said there were only 112 women working in lower grade civil service positions against more than 2,500 men; at higher grades, the ratio was three women against 66 men. Most women were found in lower grade secretarial positions.

Meanwhile, women also remain under-registered as voters, even though they account for more than half the country’s population.

According to the report, this decline can be attributed to issues of security, recession, intimidation by militant forces and disappointment with the political system. Other factors, particular to women, include household responsibilities and socio-cultural constraints. It is more difficult for women to go out and vote as compared to men for several reasons, including security. There is still a shortage of women within the decision-making bodies of nearly all political parties. For example, there is only one woman on the 53-member central executive committee of the currently ruling Pakistan Peoples Party (PPP) and none on the 26-member executive committee of the Pakistan Muslim League-Nawaz.

The 2002 National Policy for Development and Empowerment of Women calls for removing hurdles to political participation by women and mandating the inclusion of women through merit in all decision-making bodies at all levels. However, most parties do not take the views of women specifically into account while drawing up election manifestos, and women who are consulted are those with an already strong status in the parties, often on the basis of their family background.

The data also shows low participation of women even after they are elected to local councils. According to one report, “Only one-third of elected women attend all or nearly all the meetings of the council.”

Women’s Protection Draft to Be Tabled for Legislation, In Punjab Assembly, Pakistan

LAHORE – A draft on the protection of women policy has been prepared by Aurat Foundation with the consultation of Rutgers WPF, an international NGO, which conducted a research in two districts of the Punjab province. The proposed draft would be presented to the Punjab government for legislation.

A provincial consultation meeting was organised by the Aurat Foundation on domestic violence against women here on Monday, in which the findings and recommendations were shared with the women MPs, lawyers and members of the civil society organisation. Rutgers WPF programme manager Kanwal Qayyum while presenting her research of DG Khan and Muzaffarghar said in March 2012, some visible progress had been done in legal reforms for the protection of women in Punjab.

“Dowry deaths, domestic violence and abandonment of wedded women are common. Unskilled women can get only poorly paid jobs, have no bargaining skill. Penal laws which aimed at punishing the perpetrators of crimes against women are present remedial justice to rectify the wrong done to a woman victim is absent in legal system,” regretted Kanwal.

“This state of affairs requires an urgent action on the part of the state to establish a system of rescue, assistance, shelter and rehabilitation for women survivors, Kanwal emphasised.

The protection system for women survivors will be established to operate in 36 districts and the protection system may include a round the clock helpline with a special toll free telephone, medical help, legal advice, rescue, dealing with missing cases, shelter home, protection from abuse and exploitation, counselling, emotional support, vocational training and rehabilitation .

The district protection system will provide relief to a woman survivor who is over 16 years of age. The District Women Protection Committee will be the principal policy-making body. Maleeha Zia, a lawyer, also presented her draft on the Protection Survivors of Violence Legislation and Implementation Policy. Resident Director Aurat Foundation Nasreen Zehra, Mumtaz Mughal Coordinator Aurat Foundation briefed the meeting.

A case was filed yesterday against two sisters of schoolboy Rony for pushing his schoolmate Sadia Akhter Pinky into committing suicide.

Threatened by the two with dire consequences if an abduction case against them was not withdrawn, 15-year-old Pinky took her life on Sunday at her grandmother's residence in the capital's Manda.

Schoolgirl 'Commits Suicide' After Being Rebuked By Elder Sister

A schoolgirl allegedly committed suicide by hanging herself from the ceiling fan of her room in the capital's Rampura yesterday.

Later, as Alo was not responding from her room, her parents broke open the door and found her hanging.

They rushed her to Dhaka Medical College Hospital where doctors declared her dead.

An unnatural death case has been filed with Rampura Police Station.

Girl Commits 'Suicide' After An Altercation With Her Mother In Bangladesh

A college girl allegedly committed suicide over a trifling matter at Rahelapur village in Sadar upazila early yesterday. The deceased was identified as Tazrin Khatun, 16, daughter of Robiul Islam of the village. Police said Tazrin locked in an altercation with her mother over her study at night.

Lebanon’s Sidon in Shock over Killing of Elderly Woman

Police found the dead Badriyya al-Sinn in the apartment with her hands tied behind her back, security sources said, adding that authorities were alerted to the case by the woman’s blind son, Nabil al-Masri.