Just Like Hindu Marriage Act, There Should Be Muslim Marriage Law: AIMWPLB 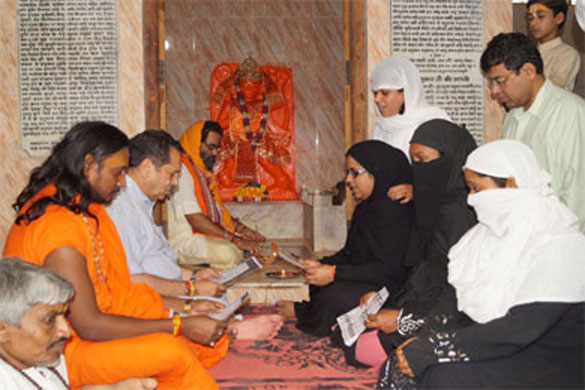 The prayers are being performed by the activists of Muslim Mahila Foundation. (Photo credit: ANI)

Just Like Hindu Marriage Act, There Should Be Muslim Marriage Law: AIMWPLB

As the Supreme Court begins hearing a bundle of cases related to triple Talaq, polygamy and Nikah Halala Thursday, All India Muslim Women Personal Law Board (AIMWPLB) reiterated it was hopeful of protection from triple Talaq.

“Just like how the Hindu Marriage Act exists, there should be a Muslim Marriage law too,” ANI quoted AIMWPLB president Shaista Amber, who is also a petitioner in the Supreme Court, as saying Thursday.

“Women these days are well-versed with Shariyat law and are not looking to modify but ensure protection against triple Talaq”, Amber said.

Meanwhile, showing confidence in the upcoming verdict on the issue, AIMPLB’s Maulana Khalid Rashid Firangi Mahali said “we are confident that the verdict will be as per Constitution”.

Amber had earlier said the AIMPLB should not act like Khap Panchayat (kangaroo court) and has no right to impose its decisions on issues like ‘triple Talaq’. The decision of the court and Parliament will finally be accepted.”

She had also said that three months counselling period mentioned in the Sharia (Islamic law) cannot be overlooked in the name of defending the law.

VARANASI: The Sankatmochan (lord Hanuman) temple of Patalpuri Math of Daranagar locality echoed with the hymns of the chanting of 'Hanuman Chalisa' on Wednesday. The ordinary looking practice was special as the recital of the hymns, applauding lord Hanuman, was being done by Muslim women who prayed to the Sankatmochan (the one who removes all threats) for rescuing them from the practice of triple Talaq+.

The prayers are being performed by the activists of Muslim Mahila Foundation in PM Narendra Modi's constituency even as the issue comes up for hearing in the Supreme Court by the constitutional bench on May 11. A seven-member constitution bench of the Supreme Court will start hearing from May 11 the petitions against the Islamic divorce practice of triple Talaq.

The women activists recited the 'Hanuman Chalisa' 100 times from the chalisa written in Urdu. "This temple is special (for idol of Hanuman facing south direction) hence we decided to seek the blessings of Hanuman as we have heard that whosoever recites the Chalisa 100 times gets his or her wish fulfilled, which for us is getting rid of the practice of triple talaq," said Nazneen Ansari, national president of the foundation. We have prayed for getting rid of ill-practices like triple Talaq, Nikah Halala and other atrocities faced by women of the Muslim community, she added.

Muslim devotees at the temple were joined by Indresh Kumar, a leader of RSS of the city, along with Pithadishwar of Patalpuri Math, Baba Balak Das. "We are sure that our deity would help our Muslim sisters whose devotion is not less than any of their Hindu counterpart," they said.

Indresh Kumar said, "The time has come when we should all unite against the wrong practices of the society, including the practice of triple talaq, and move ahead as Muslim women from all corners of the country are fighting against this ill-practice."

Four Muslim women have allegedly been assaulted in Sydney in an attack described by New South Wales police as “bias-motivated”.

The women were allegedly punched outside the University of Technology in Ultimo on Wednesday, leaving one victim with a bloodied mouth.

“[I was] staring absentmindedly ahead of me when some lady … came up to me and punched me in the face,” said Hanan Merheb on Facebook.

“She just punched me and walked off, as casually as if she had just come to say hello.”

The four women, two 18-year olds, a 19-year old and a 23-year old, were all students at the University of Technology.

Islamophobia Register Australia said it was “shocked by the incident” and was investigating the matter.

Kais Al-momani posted on Facebook claiming to have witnessed the attack.

“I didn’t know what had happened but I could see straight away that her mouth was covered in blood. She was crying and shaking and said she’d been punched in the face and knocked to the ground by another woman who she didn’t know.

“[She] was a young student from a migrant background. As you can imagine she was absolutely terrified after this incident … I wish there was more we could do as academics, and as a university, to support victims like her, and to make our campus a safe place for everyone.”

London police on Wednesday charged three women, including a mother and daughter, with terrorism offences and conspiracy to murder after a raid during which one of them was shot.

The charges were announced followed the April 27 operation at a home in north-west London, during which 20-year-old Khawla Barghouthi was arrested and Rizlaine Boular, 21, was shot by police.

The Metropolitan Police was given permission to hold the women for an extended period of questioning and they were charged on Wednesday with preparation of a terrorist act and conspiracy to murder.

Counter terrorism officers had been monitoring them ahead of the raid, police said at the time of the arrests, without giving detail of the nature of the terrorism plot they were allegedly behind.

The women are due to appear in court on Thursday.

Seven other people arrested as part of the terrorism probe have been released from custody, including three women aged 18-19.

Britain’s national terror threat level has been “severe”, meaning an attack is highly likely, since August 2014.

The northwest London raid came hours after a man was arrested near the British parliament in possession of three knives.

Khalid Mohammed Omar Ali, 27, has been charged with preparing terrorist acts in relation to that incident and faces further charges related to alleged bomb-making in Afghanistan.

His arrest followed the March 22 attack near parliament by Khalid Masood, 52, who drove into pedestrians, killing four, then stabbing a police officer to death before being shot dead by an armed officer.

The wife of the leader of a hunger strike by hundreds of Palestinian prisoners in Israeli jails has written to Pope Francis calling on him to intervene “before it is too late”.

Fadwa Barghouti, wife of Palestinian leader and prominent prisoner Marwan Barghouti, has called on the pope to “speak up, because freedom and dignity are God given rights, and no human group should deprive another of these rights.”

“Your call for respect of the rights of the Palestinian people, including the rights of our political prisoners, would allow the voice of those placed in isolation to reach the world,” the letter says.

The Vatican has recognized Palestine as a state.

The hunger strike began on April 17, led by Barghouti, who is serving five life sentences over his role in the second Palestinian intifada.

Israeli authorities say 894 Palestinian prisoners have kept up the strike, though Palestinian officials say it is more than 1,000.

Some 6,500 Palestinians are currently detained by Israel for a range of offences and alleged crimes.

Around 500 are being held under Israel’s system of administrative detention, which allows for imprisonment without charge.

Palestinian prisoners have mounted repeated hunger strikes, but rarely on such a scale.

Israel has vowed not to negotiate with the hunger strikers, with Public Security Minister Gilad Erdan calling them “terrorists and incarcerated murderers.”

In her letter, Fadwa Barghouti said “the Israeli courts are instruments of oppression not justice, especially Israeli military courts with their conviction rate of 90 percent to 99 percent for Palestinians.”

Marwan Barghouti, called the “Palestinian Mandela” by supporters, is a popular figure among Palestinians.

The European Parliament has called for his release, saying he could potentially help peace efforts.

While many Palestinians view him as a hero, Israelis point to the bloody suicide attacks of the second intifada of 2000-2005 and his role in that uprising.

Rosheen Khan, also known as ‘Mermaid of Churna Island’, has become the first and the only female scuba-diving instructor in Pakistan.

According to a newspaper report, Khan’s passion for scuba diving started during her teenage years when she worked at the Karachi Scuba Diving Center where she met her boss and instructor Yousuf Ali who later taught her how to scuba dive. A 20-minute documentary ‘Limitless’, that highlights Khan’s journey, was screened in Karachi on Saturday.

The documentary by Nameera Ahmed, a Pakistani-based director and producer, was made with the motive of breaking stereotypes in Pakistan and to encourage women to face their challenges and move on. During a discussion with the audience after the screening of the film, Rosheen recalled the start of her journey with Yousuf Ali.

“He at first wanted to know if I am sure I wanted to do it, I didn’t even know how to swim then. But after giving me some basic training, he took me 60 feet down. It was an amazing experience for me. I didn’t want to come back up,” during a discussion with the audience after the screening of the film,” she was quoted as saying.

Not everyone was able to accept Khan’s accomplishment. She faced many challenges with people who did not feel confident enough to dive with her. Her family, too, did not approve of her working in a place where the majority were men.