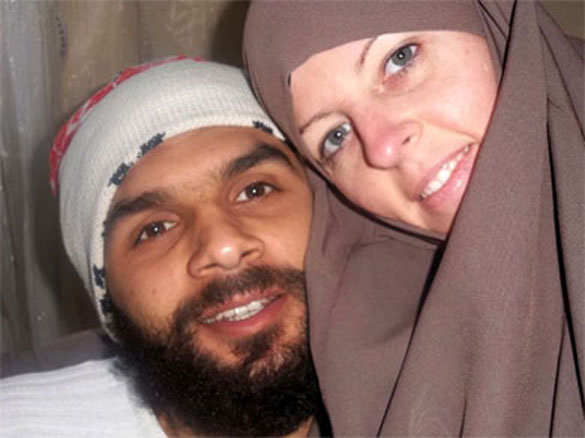 The Co Louth woman tied the knot several times before leaving this country for jihad in Syria.

Sources say Smith’s road to joining the terror group began when she was moved from her exciting Defence Forces job travelling the world with Irish dignitaries.

The “head turner” — who is due to return home shortly with her daughter Rakeya, two, after their Syrian camp was bombed — became increasingly unpredictable and spouted about “Western imperialism” while still in uniform.

The 37-year-old left the Army and threw herself into Islam, marrying her first Muslim man, an Algerian, in August 2012, before divorcing him a few weeks later.

Their religious marriage was not registered at the Irish civic offices and some friends who attended were shocked over Smith’s speedy divorce from her husband.

She then married an Iraqi man from Dublin and is believed to have divorced him after a short honeymoon in Turkey.

Smith later travelled to Syria with “ISIS Goebbels” John Georgelas in 2013, an American convert to Islam who was part of the terror group’s media team.

Shortly afterwards, the Dundalk native married Tunisian fighter ‘Ahmed’ in the living room of the building she was staying in.

A few weeks later the couple snuck out of Syria, through Turkey and back to Tunisia.

Smith and her husband, who was nine years her junior, lived a quiet life there but she was determined to find her way back to jihad and pushed him to also return to Syria.

The 29-year-old refused and Smith, frustrated with his decision, travelled back home in 2014 undetected by Irish security sources.

Trip Back To The Caliphate

During this time Smith planned her trip back to the caliphate. She chatted online to men around the world and is believed to have travelled to the UK as well.

Ahmed, who is believed to have been heartbroken after their split, waited for his bride — who was already secretly arranging to travel from Ireland to Istanbul and across the border into Syria.

Smith, who was friends with notorious IS recruiter Sally Jones, then lived with her “guru” John Georglas in terror capital Raqqa.

The jihadist said in an interview that she left Georgelas’s house and later married British/Pakistani IS fighter Sajid Aslam, who, she claims, is the father of her two-year-old daughter.

But Smith said their marriage was unhappy as she “wasn’t attracted to him”.

So in her short time as a Muslim woman, Smith had by now managed to marry four times.

Is Bride Due Home

The convert is due back in Ireland in the coming days from Turkey, having repeatedly asked to be allowed to return.

It’s also understood she is not convinced she will face prison time here despite an ongoing Garda investigation into her activities in Ireland before she left for Syria.

Cops have already carried out interviews in Dundalk as the final preparations are being made to expedite Smith’s release by Turkish authorities, while all plans for her return have been finalised.

The IS member and her girl had been held in a Syrian camp since February 2019 after escaping the terror group’s last enclave in Baghouz — but this was bombed and she fell into Turkish hands.

The 37-year-old claims she never participated in any fighting but gardai will be scrutinising this as photos emerged of Smith posing with weapons in Tunisia.

Having previously raided her house, gardai have now turned their investigation back to Smith’s hometown where they are questioning former associates.

It is unclear if Smith will fly into Dublin Airport or Baldonnell but she is due to be arrested and questioned upon landing.

Locals in Dundalk have already expressed frustration at her potential return to the town — but it is believed the former air steward will not settle there.

It is unclear if DNA samples have been taken from Smith and her daughter Raekya to prove parentage.

It was reported that the parents of Smith’s alleged husband Aslam have reached out to her family to gain access to their grandchild.

The Omagh native was sentenced to two and a half years in prison for attempting to bring her children to Syria to join Aslam.

A Manchester woman who had Islamic State instructions on how to plan a terrorist attack on her phone has been jailed.

Saria Saugir Hamid, 39, got the material from extremist magazines.

She downloaded publications by the terrorist organisation Islamic State, which contained articles which encouraged the reader to engage in acts of terrorism.

Hamid, of Boyle Street, Cheetham Hill was sentenced at Manchester Crown Court to 28 months - and will serve a minimum of 14 months in prison.

She was sentenced for five offences relating to the collection of terrorist information, likely to be useful to a person preparing for or committing an act of terrorism having pleaded guilty at an earlier hearing.

She was stopped by officers at Manchester Airport on July 18th as she attempted to fly to Turkey with her family.

Detective Superintendent William Chatterton, of Counter Terrorism Policing for the North West, said: "As terrorist propaganda can be used as a tool in the radicalisation of others, it is a real and serious threat which we remain committed to tackling.

"I hope this case shows that anyone found to possess or share any form of terrorist publications or propaganda can expect to be investigated and brought to justice.

"I would like to take this opportunity to thank all involved for their support, co-operation and tireless efforts throughout the investigation, including the Crown Prosecution Service."

A police force has been accused of “victim blaming” for suggesting that women should not walk alone due to the risk of attack.

Nottinghamshire police said in a Facebook post that walking unaccompanied “especially at night” was a risk women should not be taking, following a report of a man acting suspiciously towards a woman.

The post, which was swiftly deleted, said: “Taking a risk when it comes to walking alone at night is not one of those things we should be doing. Women who walk alone especially at night are at risk of harassment, or even physical assault.”

The message, which prompted a backlash on social media, was also criticised over its mention of a “late-night store run”.

Helen Voce, the chief executive of Nottingham Women’s Centre, told the BBC she could not believe the post had come from police.

“It felt like a 1980s thing; it is so condescending, blaming women for going out and it’s so sexist about us coming back from the shops,” said Voce. “I think it makes women feel like it’s their fault and that’s ridiculous.”

She added that police should be giving men advice on how to make women feel safer at night. “It’s men that need to change their behaviour,” she said.

A police spokesman said: “We recognise this was a clumsy attempt to communicate an incident with the underlying intention of keeping people safe.

Guardian Today: the headlines, the analysis, the debate - sent direct to you

“The post was swiftly deleted as soon as it was brought to our attention. Feedback has been provided and we would apologise unreservedly for any offence caused.”

Responding to the post, by the force’s Broxtowe North police team, one Facebook user wrote: “We all hope you mean: ‘Everyone should feel safe enough to walk alone at night and it is our job to help make that happen’.”

Another user responded: “When I read this, all I feel is fear and am reminded again, that as a woman I’m not supposed to be in public spaces. Change the narrative please!”.

While another said: “May I politely remind you it is 2019 and we no longer blame women for whatever crime has been committed against them?”

Mr Atkhar is an engine design specialist and a former Conservative mayoral candidate for Bedford.

"During my campaign for Luton South where 30% of the population is Muslim, it has become increasingly obvious, the hurt and anger that has been caused by the comments of the Prime Minister about Muslim women. Whatever the intent of the column, the effect has been to reinforce the widely held view that the Conservative Party has a blind spot when it comes to Muslims.

"This view is further exacerbated by the fact that the Prime Minister refuses to apologise for those comments and hold an independent enquiry into islamaphobia despite committing to it on live television.

"As a loyal and long serving member of the Conservative Party, it is very difficult for me to raise this because I passionately believe that a Conservative government is the best thing for our country including for Muslim communities. I now know how difficult it must have been for the former MP of Luton South Gavin Shuker to raise the issue of anti-Semitism within his Party. Just like him I can no longer remain silent as I would be complicit in the blatant discrimination which exists not only within the Party towards individuals but also when it comes to the policy agenda.

"I am therefore calling on the Prime Minister to unequivocally apologise for his comments about Muslim women and agree to hold a full independent and transparent enquiry into Islamaphobia within the Conservative Party."