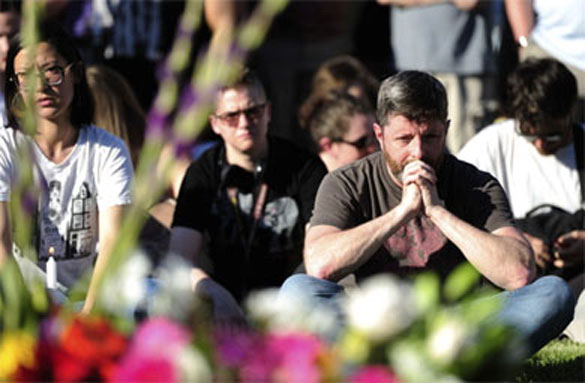 One of the vigils held in Portland on Saturday. Photo: Alex Milan Tracy/Sipa USA via AP

Iraqi military sources said on Sunday that ISIS militants began to spread snipers in the old city of Mosul, along with car bombs and suicide bombers.

Iraqi forces are advancing cautiously towards the old city of Mosul, amid clashes between Iraqi forces and ISIS in the neighborhood of the medical city and Ibn Sina Hospital.

Major General Maan al-Saadi, commander of second special operations anti-terrorism forces, said that his forces have recovered almost half of the neighborhood of Al Sehha, adding that it is not possible to set a time limit to end the battle, because on the ground there are many variables.

Saadi revealed that ISIS began to use women in the fight, after having lost many of its men.

The Iraqi military sources confirmed that the area ISIS controls in the western side of the city of Mosul has shrunk to only 5 percent, expecting to move into the decisive stage of the battle by the first half of next month, according to Al Arabiya channel on Sunday.

The joint Iraqi forces have also begun a new operation to wrest the last three neighborhoods - Al Shifa, Al Zenjeely, and Al Sehha - in western Mosul from ISIS’s control. They say they aim to tighten the siege on the old city with its complex and narrow alleys, which will be the place where ISIS is wiped out in Iraq.

When the operation was launched, Iraqi forces managed to control the third bridge connecting the two sides of Tigris and Mosul International Hotel in Al Shifa district, after violent clashes between the two sides.

The control of the hotel building, according to military estimates, gave Iraqi forces the advantage of spreading snipers to target the militants’ armed men in nearby areas.

The battles between the Iraqi army and ISIS elements resulted in the deaths of dozens of fighters from both sides.

Iraqi sources said that among the dead were two field commanders of the Iraqi army, Colonel Abdul Baqi Dhahi al-Saadoun, and Colonel Ahmed Kazem al-Tamimi of the 3rd Infantry Brigade.

Military sources did not disclose the circumstances of their deaths.

In a related context, the Izzidiyoun fighters took control of the village of Kujo, west of Mosul, from the People's Mobilization Force in the presence of Lieutenant General Abdul Amir Yar Allah, commander of the military campaign to liberate Mosul from ISIS.

The village was taken from ISIS two days ago, and is an extension of the south of Qada’ Sinjar, where the Yazidis are in the majority.

The group, which consists of 40 imams, five male preachers, four female preachers, and a q?ri? (reciter of the Qur’an), was sent by the Moroccan Ministry Endowments and Religious Affairs.  They were dispersed across the country’s cities including Madrid, Barcelona, Targona, Zaragoza, Malaga and Las Palmas.

The group will hold conferences and give lectures and sermons following the initiative of the Ministry and the Hassan II Foundation for Moroccans Living Abroad, in coordination with the Federation of Mosques in Spain.

“This initiative aims to teach the Moroccan community the noble values, principles and teachings of Islam that renounce violence,” said Abdelaziz Mouden, the Head of Federation of Mosques in Spain.

Mouden added that “the initiative also came to meet the needs of Moroccans living in Spain in the religious field, noting that the Moroccan community in this country is adhering to the Maliki rite, which provides answers to all questions related to religious affairs.”

Earlier this month, it was announced that the Moroccan Minister of Endowments and Religious Affairs would send 400 imams and morchidates to European countries, including France and Italy.

Even as public outrage grows at the molestation and groping of two women by over a dozen youths in Uttar Pradesh's Rampur, former minister and Samajwadi Party leader Azam Khan on Sunday asked people to keep womenfolk indoors to protect them from molesters.

His statement came after TV channels telecast a video clipping that has gone viral on social media, showing the youths accosting two women, groping and molesting them while they repeatedly pleaded and begged to let go.

"After the Bulandshahr incident, everyone should try to keep women of the family indoors. Girls should not go to places where there is naked dance of shamelessness," said Azam Khan while referring to the July 2016 gang rape of a minor and her mother in Bulandshahr.

"It is not at all surprising... so many cases of rape, murder and loot have taken place under the present government," he told the media while reacting to the molestation video.

Khan has a penchant for making controversial statements. He was made to apologise by the Supreme Court for calling the Bulandshahr case a "political conspiracy".

According to the FIA officials, during checking at Benazir Bhutto International Airport Islamabad, three Afghan women leaving from England were found having fake UK passports and their Afghan passports.

The FIA said that the nabbed Afghan women including Raheela, Nabeela and Aguzara acquired the boarding passes on Kabul-tickets.

All the passports and boarding cards were taken from the women by FIA and they were being interrogated.

The dead body of a young girl found from a container in Kabul has sent shockwaves as the security officials confirm that the young couple had locked themselves inside the container for some happy moments.

The security officials in Kabul police commandment said the girl had already died when a search operation resulted into the tracing of the two.

The Head of the Criminal Investigation Department Salim Almas confirmed on Sunday that the dead body of the girl was recovered from inside the container while the boy was in a state of coma.

Almas to BBC’s Afghanistan service that the couple had locked themselves inside the container and the girl died to the lack of oxygen while the boy is still in coma.

He said the bodies were recovered from Macroryan area of Kabul and an investigation is still underway regarding the incident.

The security officials are saying that the boy has been admitted in a hospital in Kabul and the body of the girl has been taken for forensic examination.

No further details have been given regarding the identities of the boy and the girl but reports suggest that the boy is the son of a member of the Afghan Parliament’s Lower House, Wolesi Jirga.

Dubai: The month of Ramadan is often associated with the many works that regularly appear on Arabic screens. However, this year one show is standing out from the pack.

Currently being shown on MBC TV, ‘Al Gharabeeb Sood’ (Black Crows), directed by Hussam Kassem, Adel Adib, and Hussain Shawkat, is a drama that has broken away from lighter soap operas that typically appear during Ramadan.

For the first time, the programme depicts the rise of extremism in the region from the female perspective.

They are mothers, daughters, wives, and suicide bombers.

The show tells the stories of women who are join Daesh under various circumstances — some volunteer while others were forced into joining.

The show depicts Daesh as a ruthless criminal organisation run by corrupt leaders.

According to MBC, ‘Black Crows’ tries to show how terrorist organisations prey on people’s psychological, social and behavioural weaknesses.

Some of the episodes are based on true stories.

As the show tackles controversial topics, it is only natural that the show would generate wide debate.

Viewers took to Twitter immediately after the show aired on Saturday night to voice their opinions.

Some felt the show portrayed Islam in a bad light.

@Tmaaam1972 wrote: It encourages erasing Islamic identity and erasing a united Islamic community. It only encourages a more distorted image of the religion

Others said the show promoted terrorism.

@Athought_ wrote: While governments are doing the impossible to prevent the spread of terrorist ideals, ‘Black Crows’ does exactly the opposite by promoting Daesh.

On the other hand, some believe that the drama draws attention to the organisation and their agenda.

@Abdr_Man wrote: The show is nothing but a staged cinematic production meant to disrupt reality and feed upon the fear and naivety of the innocent.

Faysal Al Mutairi said that the series was “cheap” and that it focused only on Sunnis.

“The series simply ignores the terrorism by Shiites in Al Qateef in Saudi Arabia, Iraq and Syria and what is happening to people in Iran’s Al Ahwaz,” he posted.

Another user, writing under the moniker of Lying Liberal, said that the series was targeting Sunnis.

“The channel does not air any series or even any reports on the Shiite forces in Iraq or in Al Qateef.”

Others however dismissed critical reviews.

“To the idiots who are upset because of the series: Have the courage to speak out and say that you support Daesh. There is no need to come up with all sorts of excuses and hesitations,” Rana wrote on Twitter.

He said that Daesh was a mindset.

“The series is about Daesh and the crimes committed by its members. There is no problem since you are well aware that Daesh does not represent Islam,” Hamsa Al Gahmedia wrote.