•  Police to Charge Four Women for Possessing Alcohol in Maldives

•  Sanam Fakir Sets Her Own Terms of Life as a Transgender 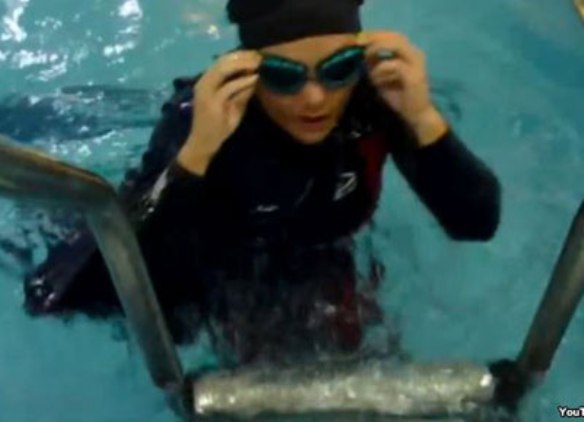 When the cameras panned to the Colombian singer Shakira cheering on her footballing husband, Gerard Piqué, during a Confederations cup match, to many it was just another shot of a glamorous celebrity. But in Iran, the few seconds of a woman with bare arms and a revealing top broadcast on national television for the first time prompted furious debate.

Hardliners in Iran attacked the Islamic Republic of Iran Broadcasting (IRIB) network this week for a series of gaffes, showing "indecent" and "un-Islamic" images in the middle of its live sports coverage, including the glimpse of Shakira.

The images came as a surprise to millions of viewers. Thousands of her Iranian fans quickly posted the still images of her appearance online and tweeted their delight. "Everyone tune in to [IRIB's] channel 3, they're showing Shakira!!!," tweeted one. "Last night they showed Shakira, tonight they shall show Jennifer [Lopez]," read another tweet.

Iranian women are not allowed to accompany men in stadiums for national football matches, and international games, usually streamed from foreign-based satellite channels, are strictly moderated. But censors appear not to have had enough time to react during last week's coverage.

Another big challenge for the state TV came within a few days. This time, Iran's national volleyball team was in a rare high-profile game with Italy on Sunday in Sardinia, where high temperatures had prompted yet more spectators to wear revealing clothing. To the dismay of fans, officials at the IRIB decided to broadcast the match with a seven-second delay and repeatedly cut live coverage to show archive images in order to avoid scenes deemed inappropriate. Despite this, it was unable to black out all images, and those broadcast on national TV included scenes showing Iranian exiles with western clothing.

Both occasions prompted Ali Motahari, Tehran's conservative MP, to issue a warning to the IRIB asking it to take more care.

In response to his criticism, Ezatollah Zarghami, the head of Iran's state television, said on Tuesday that broadcasting volleyball matches was even more difficult than showing live election debates, his comments grabbing headlines in Wednesday's newspapers in Tehran.

Zarghami faces another problem on Friday for a volleyball match between Iran and Cuba.

"Because of the warm weather in Cuba, the situation is going to get even worse," he warned. "We have decided to negotiate with our cultural colleagues in Cuba in order to have fans wear tracksuit trousers and sweatshirts," he told the Mehr news agency. Zarghami's comments about talks with Cuba were taken seriously until Mehr later clarified he was joking. Zarghami said that state TV has no other way but to broadcast the match or otherwise viewers will turn to satellite channels.

"Not many right activists dare to touch sensitive issue like female circumcision which is still in practice among select conservative communities and tribes both in India and Pakistan but this tradition is against dignity of a women and Ansar Burney Trust International has decided to shake hand with Indian like minded Human Right Organizations to initiate movement against women khatna" said Burney while talking to TOI over phone from Karachi on Wednesday.

Practiced widely in African countries, the female circumcision also known as Female Genital Mutilation (FGM). Preservation of virginity, religious requirement, customs were some of the justifications given by communities and tribes practicing FGM said Burney adding that the khatna leaves life long impression on girls's minds. The young girls not only face severe pain but were always at the threat of acquiring infection, urine retention, sexual dysfunction, psychological damage, complications in pregnancy and child birth etc.

"FGM is not only practiced in African countries but this terrifying act is also practiced in select communities in India and Pakistan" said he. He said the procedure was traditionally carried out by an older woman with no medical training. Anesthetics and antiseptics were not used and the practice is usually carried out using basic tools such as knives, scissors, scalpels, pieces of glass and razor blades. Often iodine or a mixture of herbs is placed on the wound to tighten the vagina and stop the bleeding added he.

Burney said that he was in touch with some like minded NGO's in India and would soon begun survey of the communities which practiced female circumcision. "We will try to persuade them against the practice and its ill effect both physically and mentally on the girls and if they didn't agree we will begin a mass movement against the practice" he said.