• 'Change Your Name ... If You Are Not Muslim': Sara Ali Khan Trolled For Kedarnath Temple Visit

• The Women Who Stayed In Afghanistan: One Decided To Work With The Taliban, The Other Is Determined To Fight Them 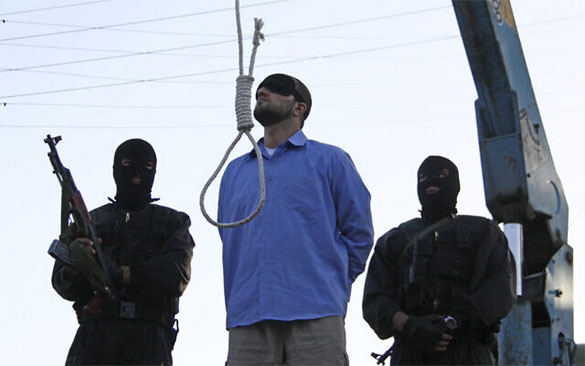 Illustrative: In this picture taken on Saturday, April 16, 2011, and released by the semi-official Mehr News Agency, a blindfolded man waits to be hanged in public, as two police officers, look on, (AP Photo/Mehr News Agency, Mohammad Hadi Khosravi)

Tehran: Iran's supreme court has upheld death sentences for adultery against a 27-year-old and his 33-year-old lover after the man's father-in-law denied them clemency, a reformist newspaper reported Saturday.

The man's wife, who presented police with video evidence of her husband's infidelity early this year, had asked the courts to spare the pair the death penalty, the 'Shargh' daily said.

Iranian law provides that if a victim's family forgives the accused in a capital crime, the convict can be either pardoned or given a jail sentence.

Under the interpretation of Islamic sharia law in force since Iran's 1979 revolution, adultery is punishable by stoning.

But Tehran changed the law in 2013 to allow judges to order an alternative method of execution, usually hanging.

It was unclear what form of execution the court ordered in the latest case.

'Change Your Name ... If You Are Not Muslim': Sara Ali Khan Trolled For Kedarnath Temple Visit 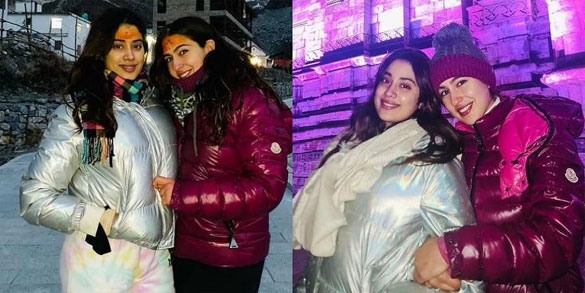 MUMBAI: When Sara Ali Khan posted a picture of her with Janhvi Kapoor at Kedarnath with the caption: "Back to where it all began (emojis) #jaibholenath #grateful #blessed", little must she have imagined that it would cause the troll army to see red.

Kedarnath has been in the news lately because of Prime Minister Narendra Modi's visit to the holy shrine to unveil a statue of Adi Shankaracharya. For Sara Ali Khan, it was an Instagram moment, but it exposed her to a vicious troll attack, which her father, Saif Ali Khan, is more used to.

Her attackers were miffed with Sara for visiting the temple despite being a Muslim. They flooded her Instagram account with hate messages. Some even went to the extent of asking her to denounce her religion if she wished to engage in idol worship. One of the trolls wrote: "Change your name ... If you are not Muslim."

An overwhelming number of her followers, however, supported Sara for her choice. And the number of likes -- 2.17 million, and counting -- showed that the trolls were in a hopeless minority.

Since the Taliban took over Afghanistan in August, activists and journalists have been living in fear. Activists have said that they are being hunted down by the Taliban. In a tragic incident, a 29 year old activist, Frozan Safi has been shot and killed in northern Afghanistan. She worked as an economics lecturer.

The Guardian newspaper quoted a doctor named Meraj Faroqi as saying that the Taliban security forces brought the bodies of two unidentified women who had been shot dead.

The bodies were alongside those of two men in a house in Mazar-i-Sharif.  Zabihullah Noorani, Taliban’s director for information and cultural affairs in Balkh province, suggested that this could have been the result of a “personal feud”. He further told that the police were investigating the case.

It has been revealed that Frozan received a call from an anonymous number. She was asked to gather proof of her work as a rights defender and leave for a safer place. The activist believed that her request for asylum in Germany was under way. Therefore, she stuffed some documents, including her university diploma, and left home, her sister told. Rita said that they are completely unaware of who killed her.

Recently, the Human Rights Watch said that the rules formulated by the Taliban have been prohibiting most women from operating as aid workers in the country. This is further contributing into a humanitarian disaster.

Women have been holding nationwide protests regularly against the Taliban. They demand that their rights should be restored and protected.

The Women Who Stayed In Afghanistan: One Decided To Work With The Taliban, The Other Is Determined To Fight Them

KABUL: Two women from different walks of life — one a rebel, the other a bureaucrat — face an unknown future in Afghanistan. One decided to work with the Taliban, the other is determined to fight them. Both vow they will never leave their homeland.

Karima Mayar Amiri, 54, heads a department in the Taliban-run Health Ministry. She is among the few women able to retain a leadership position in the new government's bureaucracy and believes Afghans must be served no matter who is at the helm.

Many years her junior, Rishmin Juyunda, 26, could not disagree more. Afghan women will never be served with the Taliban in power, she says. The rights activist is part of an underground network determined to fight harsh Taliban policies that restrict women's freedom.

They represent a broad spectrum of women who have remained in Taliban-controlled Afghanistan after many fled, fearing a return to the brutal repression that marked the group's previous rule in the late 1990s. The international community has linked recognition of a Taliban government to factors such as guarantees for women's rights.

It is not clear what rights women will be able to retain. Under the Taliban, women in most government ministries are now unable to work, teen-age girls are prohibited from going to school, the interim cabinet is comprised entirely of men. This deepens mistrust toward the Taliban.

Amiri, a mother of six, retained her senior position as the director of the ministry's Quality and Safety Department after the collapse of the previous US-backed government. Her case is rare; most senior female bureaucrats have been barred from work across government portfolios except for health.

She is at the office by 9am to manage a team of five. Nearly every day she meets with her Taliban-appointed superiors to review action plans to combat the spread of diseases from the coronavirus to dengue fever.

"It was not a difficult decision for me to stay. I have my own department. If they request a plan, I will provide it. The Taliban leadership wants me to work for them, and I am ready," she said. "As long as I am healthy, I will work for them, for my people, my country."

Juyunda is entering her last semester majoring in economics at Zahra University in Tehran. She chose to stay in the capital of Kabul and study remotely after the Taliban's August takeover. Textbooks crowd her worktable, but her focus is interrupted by a buzzing phone. In a string of WhatsApp messages, rights activists proposed slogans for the next demonstration.

Like many young women who grew up after the US invasion in 2001, Juyunda's dreams were dashed overnight after the Taliban seized Kabul and consolidated control of the country. Many of her friends have left, unwilling to wait and see how the dust will settle following the dramatic US exit.

She stayed. "I will never leave Afghanistan. I have to stay and make a change," she said, her lively hazel eyes framed by a scarlet headscarf.

Between the Aug. 15 fall of Kabul and the final US exit two weeks later, thousands of Afghans, including many women, rushed to the city's airport in a desperate attempt to get out.

Three days after the Taliban overran the capital, she was back in the office to help meet the growing need in the crumbling health sector. International aid that once funded hospitals and health worker wages had stopped abruptly. Hospitals across the country were being hit hard by an economic crisis brought on by international sanctions against the Taliban.

When a Taliban guard attempted to inspect her bag at the ministry gate one morning, she refused and asked that a separate room be erected for female checks. They complied.

A graduate of Kabul Medical University 31 years ago, she has worked for the Health Ministry since 2004. Five health ministers have come and gone during her tenure. "Why should the Taliban be any different?" she asked.

The only change they introduced was for women to don Islamic dress. Amiri, a devout Muslim, was already in the habit of wearing a headscarf.

"Health is not political," Amiri insists. The guidelines her office formulates are sent to thousands of public hospitals, clinics and facilities across the country. "Life goes on," she says.

It took her weeks to recover from the shock of the takeover. Her family of 11 had greatly benefited after the US invasion. She and her four sisters were able to attend school in Ghor province. Her parents held well-paid government jobs. She was on her way to becoming an economist brimming with ideas to improve her country.

From social media she came to know of a women's protest organized outside the Pakistan Embassy in Kabul in September. Shortly after she arrived, a Taliban unit showed up and the group had to disperse. She stood there holding a sign "Education is a right" and repeated to herself, "I am strong, they are weak."

The Taliban have said they have no issue with the right to protest, but that the activists must seek their permission to demonstrate. Subsequent sit-ins have not been able to draw large numbers. But Juyunda said to seek permission from the Taliban would be an implicit acceptance of their rule.

Amiri was a gynecologist in the conservative Wardak province, a Taliban stronghold as far back as the 1990s when the group was first in power.

"During that time, I went to the hospital, I treated patients, delivered babies and did surgeries, and then I went straight home. That was my life," she said.

In 2021, she reverted to the same tactic. After 3:30 p.m., she leaves the office and goes straight to her Kabul home to spend the evening with her children and grandchildren.

Juyunda's childhood was marked by the violence of the Taliban insurgency in the years after the US invasion. She saw entire buildings go up in flames after rocket strikes and bombings.

At night she would sleep with a glass full of water. "I thought, if a bomb ever hit our home, I could use it to put out the flames," she recalled, smiling at the thought of her childhood naivete.