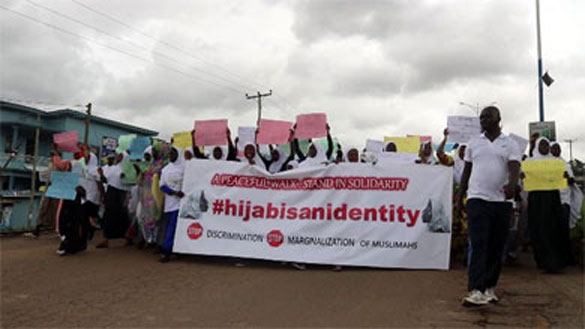 Awoman in Bihar has claimed that her husband gave her instant 'triple talaq' because she refused to become a "modern" woman and consume liquor and wear small dresses.

Speaking to ANI the woman said: "I got married in 2015 and after few days of our marriage we moved to Delhi. A few months later, he told me to be like every other modern girl in the city, wanting me to wear small dresses and go to night parties and consume liquor. When I refused, he used to beat me every day."

"After torturing for many years, a few days ago he asked me to leave his house and when I refused, he gave me triple talaq," she alleged.

The victim also approached the state women commission in this regard which has sent a notice to her husband.

"The husband used to torture her and two times he forcefully aborted her child. We have taken cognizance of this case. On September 1, her husband gave her triple talaq. We have issued a notice to her husband in the case and will be calling him," said Dilmani Mishra, chairperson of Bihar State Commission for Women.

On August 1, President Ram Nath Kovind gave his assent to the Muslim Women (Protection of Rights on Marriage), Bill, 2019, known as triple talaq, which makes it a criminal offence hat is punished with a three year jail term for the husband.

CALGARY – Hundreds of Muslim women are meeting in Calgary on Saturday to take a critical look at the upcoming election and discuss how to select the best candidate for their needs.

Being Muslimah Empowered (ME) Calgary, or 'Being ME,' is a day-long conference that has been organized by women for women who are concerned about some of the most pressing issues facing their gender today.

"We want to promote the ideas of confidence, not consciousness, action and community, and what women feel about that," said Maria Arshad, Mercy Mission Canada board member.

The event features workshops and seminars that include talks from experts on a number of topics, including making informed voting decisions, harnessing potential and finding balance between home and work.

Author Uzma Jalauddine spoke about the important of more representation of Muslim women in the business world.

There was also opportunities to discuss the upcoming election and politics.

The conference, which took place at the Telus Convention Centre, is now in its fifth year.

Muslim women in Kumasi, the Ashanti Region capital, on Saturday embarked on a street protest against “persistent harassment by schools heads and other state institutions over wearing of hijab”.

A hijab is a veil worn by some Muslim women and usually covers the head and chest. It is an important symbol of the Islamic faith.

Protestors, including some Muslim men, have vowed to protect their religious rights insisting they have equal rights before the law in all national life.

“We shall end conspiracies to stop young girls from wearing hijab to school or to work,” some of the women chanted.

Although there have been calls for the rights of Muslim women to be respected when they wear hijab, opposition to Muslim ladies wearing the veil is rife, according to the protestors.

Campaigners say the right of girls to education is under threat because school officials either shut the doors to them or taunt and punish them for their beliefs.

Leader of the protest march, Rahinatu Boamah Agyemang, told JoyNews the age-old discrimination against women and girls wearing the hijab must end immediately.

“We plan to carry out several activities to call for respect for Muslim women in every sector of the society,” Rahinatu added.

Many of the young women who joined the walk vowed to wear the veil in a bid to end the negative stereotypes about Muslim women wearing the religious garment.

One of them, Hawa Abdul-Karim said “the walk is a great idea for me and my colleagues. It will empower, enlighten and break barriers for us.”

Deputy National Chief Imam, Sheikh Mohammed Kamil Mohammed, who also joined the walk, encouraged Muslim women not to give up the hijab over the discrimination.

He said the Muslim community will continue to demand equal rights no matter how long it takes.

Sheikh Kamil called on the government to direct all agencies to stop unwarranted discrimination against Muslim women over hijab.

He is confident, other Muslim leaders will join the campaign to ensure young girls are given their legal rights to wear hijab.

Member of Parliament for Asawase, Muntaka Mohammed also joined the march in Kumasi on Saturday.

An Islamic committee is already in place to receive complaints of discrimination over hijab.

A case of discrimination against a Muslim wearing hijab is currently pending before the Supreme Court.

Muslim women hope a favourable ruling will bring an end to the problem.

Kerala-born Catholic nun Mariam Thresia is set to be declared a saint by Pope Francis in a function at St Peter’s Basilica in Rome on Sunday. She is the third nun and fourth clergy member from the Kerala-based Syro-Malabar Church to be canonized into the league of saints.

Bishops and nuns from the Congregation of Holy Family, which Thresia had established, will take part in the event.

The nun had died in 1926 aged 50. The process of canonization had begun in 1975 with a commission formed to look into her life and miracles attributed to her. She was beatified in 2000, which is a step closer to sainthood. Earlier this year, Pope Francis had approved the second miracle attributed to Thresia, paving the way for her sainthood.

Born at Puthenchira village in Thrissur district, Thresia had been known as a mystic as well as a social reformer. In 1914, Thresia, along with her three friends, established a religious group Congregation of Holy Family, which later became one of the prominent religious congregations of the Syro-Malabar Church.

After Thresia, the next in the category of the blessed are Sister Rani Mariya, who died in Indore 24 years ago and Father Thevarparambil Kunjachan, who lived and worked in Kottayam district in the first half of the last century.