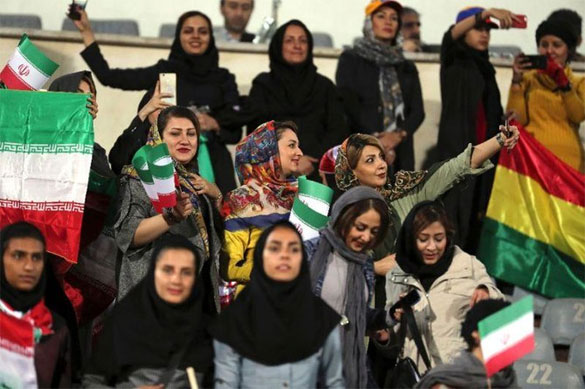 FIFA president Gianni Infantino has put pressure on Iran in an attempt to ensure that the country will allow female football fans to attend matches in the qualifiers for the 2022 World Cup. (AFP)

•  Owaisi Should Be Happy That 'Certain Protections' Being Made For Muslim Women: Member AIMPLB

•  12 Women Arrested In Oman For Participating In Immoral Activities

PARIS: FIFA president Gianni Infantino has put pressure on Iran in an attempt to ensure that the country will allow female football fans to attend matches in the qualifiers for the 2022 World Cup, according to a letter sent to the Iranian Football Federation and seen by AFP.

In the letter dated June 18, Infantino mentioned his attendance at the second leg of the Asian Champions League final in Tehran last November, between Iranian club Persepolis and Kashima Antlers of Japan, when women were allowed into the stadium, “for the first time in 40 years.”

Infantino referred to “these important first steps” but regretted that women were not then permitted to attend the friendly between Iran and Syria earlier this month, and that “a number of women seeking to attend the match were detained by security forces for a number of hours.”

“Unfortunately, this is, I also have to say, not in line with the commitments given to us in March 2018 by President (Hassan) Rouhani when we were assured that important progress would be made on this matter soon,” he added.

The FIFA president, who in early June was re-elected for a four-year term, referred to the spotlight placed on women in football at the ongoing World Cup in France and asked Iranian authorities to provide “concrete steps” before July 15 toward allowing women to attend qualifiers for the 2022 World Cup in Qatar, which start in September.

Women have been barred from attending matches since the 1979 Islamic revolution, with clerics arguing they must be protected from the masculine atmosphere and sight of semi-clad men.

Described as a moderate conservative, President Rouhani has on several occasions expressed a desire to allow women into games.

However, last October, the country’s prosecutor general said he objected to women attending matches, saying it would “lead to sin.”

Female fans were allowed to attend football matches for the first time in Saudi Arabia in January 2018, with the first match that women attended being the Al-Ahli match against Al-Batin on Jan. 12.

The Saudi Arabian government announced the lifting of the ban in 2017 and as a result, women are now able to enjoy Saudi Professional League matches.

KUWAIT CITY, June 18: There is a government tendency to pay a married Kuwaiti woman full monthly salary without having the need to go to office provided she fulfills several conditions to make her eligible to earn the pay cheque, reports Al-Rai daily.

The sources pointed out the issue which is being studied by the government has the support of a group of deputies which gives impetus to the concerned government authorities to study it in detail, and set a list of controls and conditions on the basis of which a married Kuwaiti woman will be eligible to the ‘grant’.

The sources explained the proposal gives a married Kuwaiti woman the freedom to choose between receiving a full salary equal to the salary she would receive if she continued working or stay put at home and fulfill the conditions contained in the proposal. According to the sources, the woman will not be entitled to work in a private sector or establish a private company or institution and will not be allowed to employ a driver but can employ only one maid to help her with work at home.

This is to strengthen family bond, reduce the rate of divorces which has increased significantly in the recent years and reduce dependence on domestic workers.

This is in addition to provide an appropriate environment for women to take care of their children and family affairs to ensure proper upbringing.

Bahrain is one of the top 10 start-up ecosystems with the largest share of female founders, according to the 2019 Global Startup Ecosystem Report.

The report, produced by StartUp Genome in partnership with the Global Entrepreneurship Congress, showed that with 18 percent of its start-ups founded by women, Bahrain topped even Silicon Valley (16 percent) and London (15 percent).

The report also lauded Bahrain as one of the top 10 ecosystems to watch in FinTech in Europe and the Middle East and a top 15 ecosystem for affordability of qualified talent worldwide.

Khalid Al Rumaihi, chief executive of the Bahrain Economic Development Board said: “This report draws on the views of the people who know best – entrepreneurs and founders. In a very short time, Bahrain has emerged as a leading ecosystem with particular strength in FinTech.

"With both female founders and women taking leadership roles throughout the ecosystem, Bahrain is a dynamic and diverse market at the head of new trends that are shaping the way society and business operates.”

Dr Ebrahim Mohammed Janahi, chief executive of Tamkeen, Bahrain’s Labour Fund, added: “Over the past decade, Bahrain’s startup ecosystem has made significant progress where startups can access a global network of partners to scale up and capture opportunities in Bahrain and the region."

According to Janahi, more than 59 percent of women have been served as part of Tamkeen’s micro finance support, while more than 50 percent were served within the business development program, which offers a co-financing service to cover 50 percent of business equipment.

Furthermore, Bahrain’s Al Waha Fund of Funds, a $100 million fund set up by the Bahrain Development Bank, has an all-female leadership.

Owaisi Should Be Happy That 'Certain Protections' Being Made For Muslim Women: Member AIMPLB

Owaisi should be happy that government is making certain protections for Muslim women through Triple Talaq bill, said Mehmood Pracha, member of All India Muslim Personal Law Board (AIMPLB) here on Friday.

Pracha said the arguments given by the opposition shows that they have not studied the bill properly.

However, he also criticised the bill. If anything, according to Mehmood Pracha, Owaisi as a Muslim leader should be very happy that certain protections are being made for Muslim women and he should rather criticize the government on the ground that the bill is not strong enough.

"Firstly, the bill does not take care of women in situations where Muslim men without uttering triple talaq throw out his wife. Secondly, women do not get any financial protection in this bill and matters like financial assistance should be decided by the magistrate within 5-7 days else women will get harassed in court for years without getting a single rupee in maintenance just like the provisions in section 125 in Criminal Procedure Code (CrPC,) and Domestic Violence Act (2005)," he said.

The Muslim Women (Protection of Rights on Marriage) Bill, 2019 was introduced on the first day of business in the newly formed 17th Lok Sabha. After its introduction, it met stiff opposition in the Parliament, most prominently from Congress and Muslim Majlis.

After a brief discussion, the motion for tabling the bill was put to vote. 186 members voted for introduction and 74 against.

In his objections, Congress member Shashi Tharoor said: "The bill does nothing to improve the status of Muslim women." He contended that the Bill would supersede the existing civil and criminal laws and cannot claim exception under Art 15 of the Constitution.

Asaduddin Owaisi, Member of Parliament from Hyderabad Constituency, asked how an arrested husband can pay for her maintenance and thus bill is not in the interest of Muslim women.

The All India Majlis-e-Ittehadul Muslimeen (AIMIM), Owaisi, also contended that there was no need for a separate law after the Supreme Court had declared triple talaq as null and void. The Muslim women were also covered under the Domestic Violence Act, Section 125 of the Cr Procedure Code and the Muslim Marriage Act.

Replying to the objections, Law Minister, Ravi Shankar Prasad put up a stiff defense of the government move saying the issue was not of religion but of women.

The Muslim Women (Protection of Rights on Marriage) Bill, 2019, seeks to criminalize the act of instant divorce among Muslims with a three-year jail sentence.

The bill was passed by the Lok Sabha in December last year but lapsed in the Rajya Sabha after the dissolution of the Lower House. The current bill seeks to replace an ordinance for the same which was issued by the cabinet last February.

12 Women Arrested In Oman For Participating In Immoral Activities

According to the police, the women were from ‘different nationalities’.

In a statement, an official from the ROP said, "The women were arrested in an apartment that was used to practice prostitution. Legal action has been taken against them."