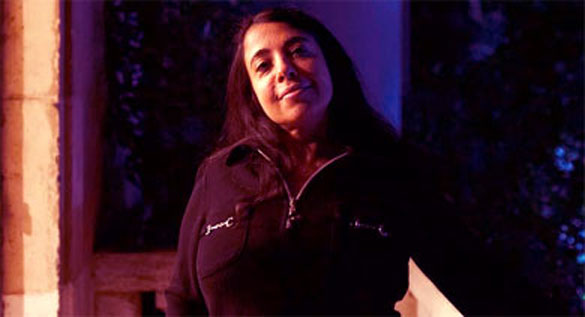 In this Monday, Nov. 11, 2019 photo, human rights lawyer Hoda Nasrallah poses for a portrait at her office in Cairo, Egypt. (AP)

•  Saudi Women in The Driving Seat For World Record

Many Coptic men prefer to benefit from the Islamic laws, Nasrallah said, using the excuse that it’s out of their hands

CAIRO: One Egyptian woman is taking on the country’s inheritance laws that mean female heirs inherit half that of men.

Since her father’s death last year, Huda Nasrallah, a Christian, has stood before three different judges to demand an equal share of the property left to her two brothers by their father. Yet courts have twice issued rulings against her, basing them on inheritance laws that favor male heirs.

Nasrallah, a 40-year-old Christian human rights lawyer, is now challenging the rulings in a higher court. A final verdict is expected to be handed down later this month. She has formulated her case around Christian doctrine which dictates that heirs, regardless of their sex, receive equal shares.

“It is not really about inheritance, my father did not leave us millions of Egyptian pounds,” she said. “I have the right to ask to be treated equally as my brothers.”

Calls for equal inheritance rights began to reverberate across the Arab world after the Tunisian government had proposed a bill to this effect last year. Muslim feminists hailed the bill.

Egypt’s Al-Azhar, the highest religious institution in the Muslim world, vehemently dismissed the proposal as contradictory to Islamic law and destabilizing to Muslim societies. But there is hope that Tunisia could have broken the taboo on the topic for the region. Nasrallah belongs to Egypt’s estimated 10 million Coptic Christians.

Christians face restrictions in inter-religious marriages and church building, and are banned from proselytizing to Muslims.

Egypt’s legal system grants the Coptic church full authority over personal status matters of Copts, namely marriage and divorce. But the church does not have the same powers over its followers’ inheritance rights.

One of the oldest Christian communities in the world, the Egyptian Coptic church is also deeply conservative on social matters, banning divorce except in cases of adultery or conversion to Islam.

Nasrallah says she is making her case on religious grounds because she believes the court is more likely to respect existing structures within the society. She says she is trying to capitalize on a rare Christian doctrine that respects gender equality.

Karima Kamal, a Coptic female columnist at the privately-owned Al-Masry Al-Youm daily, says that Nasrallah’s case highlights the double discrimination that Coptic women can face in a society where religion is printed on government-issued identification cards.

Calls for equal inheritance rights began to reverberate across the Arab world after the Tunisian government had proposed a bill to this effect last year.

“You should not implement the rules of one faith on people of another faith,” she says.

In early December 2018, Nasrallah’s father, a former state clerk, died, leaving behind a four-story apartment building in a Cairo low-income neighborhood and a bank deposit. When she and her brothers filed their request for inheritance at a local court, Nasrallah invoked a church-sanctioned Coptic bylaw that calls for equal distribution of inheritance. She says she was encouraged by a 2016 ruling that a Cairo court handed down in favor of a Coptic woman who challenged Islamic inheritance laws.

Nasrallah’s brothers also testified that they would like their father’s inheritance to be divided fairly between them, but the court has twice ignored their testimony.

Many Coptic men prefer to benefit from the Islamic laws, Nasrallah said, using the excuse that it’s out of their hands.

“The issue of inheritance goes beyond religious rules. It has to do with the nature of the society we are living in and Egypt’s misogynistic judicial system,” said Hind Ahmed Zaki, a political science assistant professor with Connecticut University.

She says the state fears that if they grant equal property rights to Christian women, Muslim women will soon ask for the same.

Girgis Bebawy, a Coptic lawyer, has represented dozens of Copts in similar cases over the last two years, though he has yet to win a single one. He’s hoping that the latest case, which is currently before Egypt’s Supreme Constitutional Court, could end differently.

Many Coptic families decide to settle inheritance matters outside the legal system, but Nasrallah says that as a lawyer, she hopes her case could set a precedent for others.

Saudi Women In The Driving Seat For World Record

RIYADH: Hundreds of Saudi women drivers took the wheel at the Saudi Driving School arena in Riyadh in a bid to break the Guinness world record for the longest women’s car convoy.

Participants were briefed by Saja Kamal, former host of the TV show “Drive,” before fastening their seatbelts and setting out on a designated course around Princess Nourah Bint Abdul Rahman University.

The event, organized by Toyota, aimed to create a convoy of 1,000 cars driven by women.

Before the engines started, the driving school arena was a sea of color, with car horns sounding and a throng of Saudi flags adding to the excitement.

Many of the participants said they were proud to take part in such an event.

“This is my chance to give something back to my country. It gives me a sense of belonging to this great nation,” said Huda Al-Qahtani.

“I’m also happy to be part of history by breaking the record,” she added.

Event organizers said that they were able to reach their goal, but were now waiting on official results to be announced.

Record numbers of women look set to stand for Parliament next month, making up about a third of the candidates.

Provisional analysis by the Press Association found 1,120 of 3,322 registered candidates were women.

The Conservatives and Labour are set to field candidates in every constituency in Britain, except Speaker Sir Lindsay Hoyle's seat in Chorley in Lancashire.

The Brexit Party has put forward 275 candidates, having stood aside in all the seats won by the Tories in 2017.

Nigel Farage has controversially withdrawn all his candidates from the 317 seats that the Tories are defending in an effort to avoid splitting the pro-Brexit vote.

However, the PA figures suggest the party has also opted not to contest handfuls of other seats being defended by other parties, particularly in Scotland.

The party, which topped the polls in May's European elections, is not standing in two thirds of Scotland's 59 constituencies, including Lib Dem leader Jo Swinson's East Dunbartonshire seat.

PA's analysis of candidate lists in each of the UK's 650 constituencies has yet to be finalised but it suggests there will be a healthy increase in the number of women standing.

The Greens and Lib Dems are fielding 204 and 188 female candidates respectively.

There have been concerns that levels of abuse on social media might deter women from standing, with a number of high-profile former female ministers citing this as their main reason for quitting frontline politics.

The Lib Dems and Plaid Cymru are set to field fewer candidates than in 2017, the parties having agreed to stand down in some seats in order to maximise the pro-Remain vote,

However, UKIP is set to see the biggest drop in representation. It is set to field 45 candidates, down from 467 two years ago.

Turkey intends to deport the two women back to Germany but neither Heida R. nor Nasim A. is expected to be arrested upon their return to the country despite their involvement with the terror group in Syria, Die Welt reports.

According to the newspaper, Heida, who is originally from Lower Saxony, left Germany for Syria in 2014 alongside her Islamic State fighter husband.

She was later captured in the north of Syria following the death of her husband but managed to escape. She was then captured again, this time by Turkish forces who had also arrested Nasim A.

While the Federal Public Prosecutor has investigated charges for the two women, the prosecutor has claimed that there is not enough hard evidence to issue an arrest warrant for either and so both will remain at large after getting back into the country.

According to the newspaper, Heida, who is originally from Lower Saxony, left Germany for Syria in 2014 alongside her Islamic State fighter husband.

She was later captured in the north of Syria following the death of her husband but managed to escape. She was then captured again, this time by Turkish forces who had also arrested Nasim A.

While the Federal Public Prosecutor has investigated charges for the two women, the prosecutor has claimed that there is not enough hard evidence to issue an arrest warrant for either and so both will remain at large after getting back into the country.

WASHINGTON (AP) — A federal judge has ruled the U.S. government was correct when it determined a woman who joined the Islamic State group was not an American citizen despite her birth in the country.

Lawyers for the family of the woman said Friday that they plan to appeal the ruling.

“This is not the end of our client’s legal options,” said Christina Jump, a lawyer with the Constitutional Law Center for Muslims in America.

Hoda Muthana was born in New Jersey in October 1994 to a diplomat from Yemen and grew up in Alabama. In 2014, she left the U.S. to join IS apparently after becoming radicalized online. While she was overseas the government determined she was not a U.S. citizen because her father was a diplomat at the time of her birth and revoked her passport.

She surrendered in January to U.S.-backed Syrian Democratic Forces as the Islamic State began losing the last of its self-declared caliphate in Iraq and Syria and has been in refugee camps ever since. Muthana said she regretted her decision to join the group and wanted to return to the U.S. with her toddler child, the son of a man she met while living with the group. The man later died.

Her family filed suit to enable her return to the United States. Children of diplomats are not entitled to birthright citizenship but the family’s lawyers argued that her father’s status as a diplomat assigned to the U.N. ended before her birth and she was automatically a citizen.

The U.S. says it wasn’t notified that his status had changed until February 1995, apparently because of a delay in reporting it by the U.N., and therefore he was still a diplomat.

U.S. District Judge Reggie Walton upheld that determination Thursday. Jump said the judge ruled from the bench that he believes he is bound by the Department of State’s representation as to when the government received notice that the father’s diplomatic position had ended, and granted the defendant’s motion to dismiss on that basis.

Her case has drawn widespread attention because President Donald Trump tweeted about it in February, saying he had directed the secretary of state not to allow her back into the U.S. The decision to revoke her passport was made under President Barack Obama.