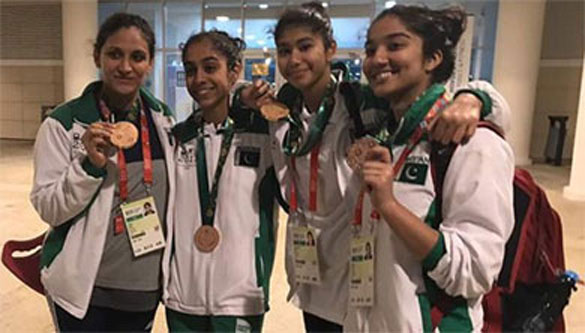 Hind Al-Zahid became the first Saudi woman to work as an executive director and member of Dammam Airports Executive Board chaired by Abdullah Al-Zamil.

The decision to hire Al-Zahid was approved by the General Authority of Civil Aviation (GACA) in a meeting chaired by Minister of Transport and head of GACA Sulaiman Al-Hamdan.

Al-Zahid promised that she will live up to the trust reposed in her.

Al-Zahid has been the head of Businesswomen Center at the Eastern Province Chamber of Commerce and Industry since 2009.

She has been a great contributor to the empowerment of businesswomen in the private and public sectors. She also raised awareness about women’s role in entrepreneurship.

She has highlighted the challenges facing women.

She was also the executive director of the Women Economic Forum from 2008 to 2016.

Al-Zahid was also listed as one of Forbes’ most influential women.

RAHIMYAR KHAN:-Man allegedly sold his 10-year-old daughter for Rs150, 000 in the area of Shedani police station. According to police sources, Muhammad Hussain Chandya traded 10-year-old Ayesha Bibi with Bilal Andhar for Rs150,000. When the locals came to know about this deal, they informed the police who took action immediately and recovered the girl after arresting the greedy father. It has been learnt that Muhammad Hussain had committed to handover Ayesha to Bilal on May 14 (today).

Experts believe that the rise of divorce in Dhaka is a positive trend because more and more women are speaking up against marital abuse.

Ten years ago, Halima Akter, employed at a private company in Agargaon, Dhaka, would not have dreamt of divorcing her husband despite the incompatibility that plagued their marriage.

In 2014, the situation was quite different, which enabled Halima to seek a solution to her problems – a divorce. She sent a divorce notice to her husband of seven years, Rasel Ahmed, on March 18, 2014.

Things have changed in Dhaka in recent years; more and more women are speaking up about their marital problems and seeking a solution. In most cases, divorce is the end result.

Dr Sadeka Halim, sociology professor in Dhaka University, believes this is a positive trend because it means that more women are willing to overcome their fear of social stigma in order to build a better life for themselves.

“In a patriarchal society like ours, women are held primarily responsible for keeping their families together – even at the cost of their own happiness and well-being,” she told the Dhaka Tribune. “But that is a flawed concept, because a husband and a wife are equally responsible for their family.

“Though we have a law to prevent domestic violence, it is still a major problem in Bangladeshi households. In most cases, it is the women who are suffer physical and mental abuse in the hands of their husbands and in-laws. But now many women are speaking up against the abuse and choosing to break out of the vicious cycle.”

With this, Pakistan inflated its medals tally to three, one silver, and two bronze.

Pakistan had previously won a silver medal in karate and bronze in shooting.

Earlier, in the first semi-final of women’s 100m freestyle, Olympian Kiran Khan finished sixth out of seven swimmers with a timing of 1:06.56.

In the second semi-final, Pakistan’s Ayesha Mishal Ayub ended seventh out of eight contestants by clocking 1:07.85 as per unofficial statistics.

In 100m backstroke finals, Pakistan’s young swimmer Bismah Khan ended seventh out of eight contestants with a timing of 1:10.45.

In the first semi-final, in which four women competed and all qualified for finals, Bismah clocked 1:09.61.

In 50m butterfly final, Kiran Khan finished seventh out of eight contestants with a timing of 30.66, while Ayesha Mishal Ayub ended eighth by clocking 31.71.

Tennis: Pakistan’s men’s tennis team on Sunday blasted their way into the final when they defeated Qatar 3-0 in their last Group B fixture.

Pakistan will take on Group A winners Turkey on Monday (today) for gold medal.

As per unofficial details, Abid of Pakistan got the better of Shanan Mousa Zayed of Qatar 7-6, 6-2 to provide his side a much-needed lead.

In the second show, Aqeel whacked Shanan Mubarak Zayid 6-3, 6-4 to double the lead.

The pair of Abid and Muzammil defeated the Qatari pair to complete a convincing win.

Pakistan had beaten Azerbaijan and Jordon in their previous meetings.

Boxing: It was not a good day for Pakistan’s boxing as experienced pugilist Niamatullah lost his 60 kg quarter-final 0-5 against Iraq’s Ammar Karbalia.

Niamat, the 2010 South Asian Games gold medallist, had got bye in the preliminaries (pre-quarters). He was the third Pakistani pugilist to have been shown the exit door.

As many as 19 shooters contested in the qualification round.

Weightlifting: Pakistan were off to a poor start in weightlifting when their highly talented player Talha Talib failed to live up to expectations in the 62 kg Group A competitions. Talha finished seventh out of ten contestants. He lifted 253 kg weight, 118kg in snatch and 135 in clean and jerk.

Eko Yuli Irwan of Indonesia with a total of 290kg won gold, Ahmed Saad of Egypt with 275kg secured silver and Faisal Alsulami of Saudi Arabia with a total weight of 266kg claimed bronze.

An official of the Pakistan Olympic Association (POA) said that Pakistan’s squads of taekwondo, wrestling, table tennis and athletics reached Baku on Sunday.