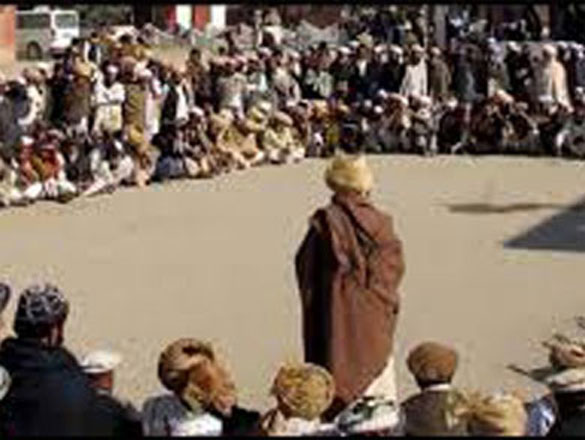 The jirga system is entirely at odds with Pakistan's constitution

•  Women Are Capable Of Living without Love, Says Jordanian Singer and Actress

London [United Kingdom], Jan.10 (ANI): Successful democratic transitions may well be taking place in Pakistan, yet for poor and disadvantaged women, especially those living in the rural areas, these changes have bypassed them, says a Pakistan-origin journalist based in the United Kingdom.

In a shocking statement that forms part of an article written for The Diplomat, Basit Mahmood says, "More women in Pakistan are murdered at the hands of close family members for supposed immoral behavior than Pakistani civilians are killed by terrorism."

He opines that even today, Pakistan continues to wrestle with the same challenges that it has always grappled with, namely an interfering army, religious fundamentalism and women always being socio-economically disadvantaged.

Now, he expresses horror over the fact that Pakistan's inefficient, politicised, and backlogged judicial system, which has over a million cases still waiting to be decided on, and the civilian government joining hands to reportedly provide constitutional cover to Pakistan's centuries old tribal system of justice or jirga system.

He writes, "The government believes the jirgas will offer swift and speedy justice to those who are marginalised, poor, and unable to access formal justice. Yet if the Government of Pakistan was hoping to show concern for the poor and marginalised, especially women, it has done the total opposite and exposed its own weaknesses."

The jirga system is entirely at odds with Pakistan's constitution, as well as with the conscience of any human being demanding equality before the law, he says, adding that it operates on the basis of centuries-old tribal codes of honour that consider women to be property.

Mahmood says that this decision if endorsed and activated must be seen as a move undertaken out of necessity and self interest, rather than by any genuine concern for citizens seeking timely resolutions to disputes.

Expressing criticism of the government's decision to pass the Alternate Dispute Resolution (ADR) Bill in 2017, Mahmood says minor changes made to it don't take away from the fact that giving legitimacy to the jirga system will undoubtedly impact the lives of women across the country drastically.

He concludes by saying, "What is all the more worrying is the manner in which the mainstreaming of such misogyny by Pakistan has gone unchecked by its biggest aid donors.. Now that Pakistan is a democracy, some have complacently come to believe that progressive policies will automatically be pursued - wishful thinking in a country where minorities have been prosecuted by an all-too-compliant state, afraid of tackling intolerance head on. Many both inside and outside Pakistan have come to believe that unequal treatment for poor and disadvantaged Pakistani women is a price worth paying for stability and harmony in a country seen as pivotal in the fight against extremism. Yet the world must be clear that this cannot be so." (ANI)

A Hindu woman has killed herself after facing harassment over her friendship with a Muslim man in the southern Indian state of Karnataka, police say.

She told a friend on WhatsApp that she loved Muslims after being questioned over her friendship with the man.

Police said screenshots of this exchange were shared on social media.

Five people from Hindu hardline groups also visited her house on Saturday to warn her parents, police say. The 20-year-old killed herself the same day.

The police initially registered a case of suicide, but widened their investigation after reports about the role of social media in her death started to emerge on Monday.

K Annamalai, a senior police officer Chikkamagaluru district, told the BBC that the woman had left a suicide note.

"She has mentioned that there was a photo of her with a man from another religious community. People started commenting about it and cast aspersions on her character," he said.

He added that he killed herself after five persons went to her house and "complained to her mother that she was in love with a Muslim man."

He added that the police had arrested one person, and were searching for others.

BBC Hindi's Imran Qureshi, who has seen the screenshots, said her WhatsApp messages were quickly shared in the district.

In the messages, she is advised not to get "involved" with a man from another faith. She replies: "But I love Muslims."

She adds that she doesn't find anything wrong in being "associated" with members of any religious community.

Mr Annamalai said "whoever has criticised the woman, whether on Facebook or WhatsApp, would be arrested".

"We believe it amounts to harassment due to which a young life has been lost. We are taking this case seriously because it wasn't her fault," he added.

In recent years, India has witnessed Hindu-Muslim tensions over what has come to be known as "love jihad".

The term has been popularised by radical Hindu fringe groups, who accuse Muslim men of participating in a "conspiracy to turn Hindu women from their religion by seducing them".

RIYADH – Several members of the Shoura Council on Tuesday criticized the Ministry of Labor and Social Development for not taking effective measures to contain the ‘frightening’ rate of unemployment among Saudi women.

Fahd Juma, a member, said there were 1.23 million Saudi jobseekers, of which 84.5 percent were women.

Taking part in deliberations over the annual report of the ministry, some members found fault with the recent report of the General Authority for Statistics with regard to the unemployment rate in the Kingdom.

Juma said: “It is unfortunate that the authority is claiming on social media that unemployment rate is 5.8 percent without taking into account the rising figures of unemployment among Saudis,” he said, noting that foreigners represent 78 percent of the workforce in the Kingdom.

Dr. Mouda Al-Khalaf drew attention of the council to the disparity in the salary of Saudi male and female staff in the private sector.

Women Are Capable Of Living without Love, Says Jordanian Singer and Actress

AMMAN: Jordanian singer and actress Mai Selim says women are capable of living without love. She shared these thoughts during her interview with Sayidaty magazine.

“Love finds women, and not the other way around. Love is not necessarily between a man and a woman, it can exist between her and her friends or even family. Love in general is very important in women’s lives,” she said.

Speaking on her role as a slum girl in “Ahl Al-Kahf,” the star said it was the first time she has worked with Majed Al-Masri, Rogina and Mohammed Adel, adding that she was pleased to work with director Ahmed Shawki.

“I do not mind participating in many works, as long as the roles I play are different and influential,” she said.

She said she is a mother and wants to see her daughter proud of her.

Selim is a young artist who has not only proved herself in singing, but in acting as well. She has displayed her acting skills in many artistic works.