At Least 200 Million Females Estimated To Have Been Circumcised: UN 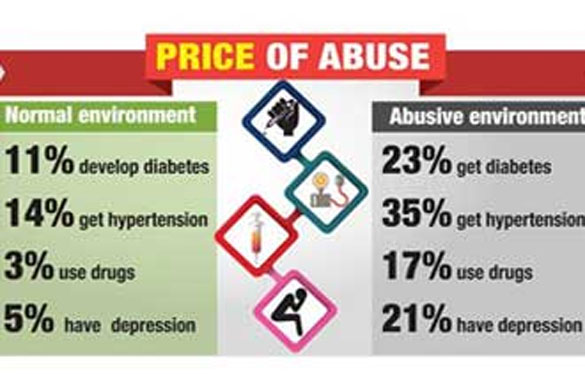 •  Eighty Percent of Saudi Arab Teenagers Have Been Abused

At least 200 million females estimated to have been circumcised: UN

UNITED NATIONS: At least 200 million girls and women in 30 countries are estimated to have undergone female circumcision ─ half of them in Egypt, Ethiopia and Indonesia, the United Nations (UN) children's agency said in a report released Thursday night.

The Unicef statistical report said the global figure includes nearly 70m more girls and women than it estimated in 2014. It said this is due to population growth in some countries and new data from Indonesia.

The UN General Assembly unanimously approved a resolution in December 2012 calling for a global ban on female genital mutilation, a centuries-old practice stemming from the belief that circumcising girls controls women's sexuality and enhances fertility.

One of the targets in the new UN goals adopted last September calls for the practice to be eliminated by 2030.

Unicef Deputy Executive Director Geeta Rao Gupta said in a statement coinciding with the new report that "determining the magnitude of female genital mutilation (FGM) is essential to eliminating the practice".

While there has been an overall decline in the prevalence of female genital mutilation over the last three decades, Unicef said it isn't enough to keep up with increasing population growth.

If current trends continue, it warned that the number of girls and women undergoing FGM "will rise significantly over the next 15 years".

Unicef statistical expert Claudia Cappa, lead author of the report, said the estimate of 200m circumcisions comes from household surveys on the prevalence of female genital mutilation, and statistical modelling.

The 30 countries, mainly in Africa, the Middle East and Asia, "have large-scale representative data," she told AP. "We still think this is a conservative estimate because we know there are many more countries where the practice exists, but we couldn't report on it with the same level of care because we don't have available data."

Cappa said the practice exists in other countries not in the study, where large-scale data was not available, like India, Malaysia, Oman, Saudia Arabia, the United Arab Emirates, as well as in pockets in Australia, North America and Europe where immigrants from countries with a large number of female circumcisions live.

In the 30 countries, Unicef said the majority of girls were circumcised before reaching their fifth birthdays.

"In Yemen, 85pc of girls experienced the practice within their first week of life," the agency said.

According to the data, girls under the age of 14 represent an estimated 44m of those who have been cut, with the highest prevalence in this age group in Gambia at 56pc, Mauritania at 54pc and Indonesia where about half of girls aged 11 or under have undergone the practice.

Countries with the highest prevalence among girls and women aged 15 to 49 are Somalia at 98pc, Guinea at 97pc and Djibouti at 93pc, Unicef said.

Eighty percent of Saudi Arab teenagers have been abused

DAMMAM: A study by the National Family Safety Program with 18,000 teenagers has revealed that 13 percent have been sexually abused, 53 percent neglected, and 80 percent faced various forms of physical and psychological abuse.

The study also showed there was poor public awareness of domestic violence, with only 2 percent of 5,700 professionals having received training to deal with perpetrators and victims, according to a report in a local publication recently.

Maha Al-Munief, executive president of the program, said abuse in childhood leads to various chronic physical and psychological problems. She said that 11 percent of children brought up in relatively safe environments contract diabetes, while this rate increases to 23 percent in abusive environments, while it is 14 percent and 35 percent for the risk of hypertension.

Al-Munief said only 5 percent of teenagers who are abused reach out for protection, according to surveys. She said many of bodies focus on current problems without investigating causes. Services offered by programs in this country include supporting children with 22 consultants who receive training of between three and six months.

She said that other centers would be opened soon to train more professionals to deal with abused women and children. Current programs include nine sessions a year for police officers, judges, lawyers and other professionals.

Al-Munief said that the program has already assisted 250,000 children in various parts of the country. Sixty percent of the calls received are from children. Between 5 and 10 percent of children are exposed to physical violence and 1 percent to sexual violence, she said.

LONDON — The ravages of Syria's civil war include an increase in women who are having abortions and suffering injuries consistent with rape, a top United Nations official said this week.

Babatunde Osotimehin, executive director of the U.N. Population Fund, also said girls are being married off so their families can pass responsibility for them to somebody else. He based his information on reports from medical facilities that work with the U.N. and focus groups.

"We want the world to know that in conflict, the most vulnerable and the ones who suffer most are women and girls," Osotimehin told USA TODAY here, ahead of Thursday's conference where 70 world leaders pledged a record $10 billion to help Syrians displaced by the nearly 5-year-old war.

The U.N. fund wants the donor nations to increase support for these women's issues. "All too often people don’t put money there. Either they put money to food security, to shelter, to water sanitation," he said. "But the dignity, the welfare and the security of women is something that doesn’t play out at all."

He noted that more pregnant Syrian women are choosing to have cesarean sections, while others have to give birth without any medical help, because of the uncertain conditions.

"Within Syria, we noticed that the rates of cesarean sections have gone up to about 50%, so that implies that women are choosing to have C-sections because they’re not sure of what’s going to happen," Osotimehin said.

Pregnant women stranded on the border between Syria and Jordan have no facilities to give birth, so kits are provided for them to give birth themselves, according to the group.

"This war and growing refugee crisis have triggered a cascade of deadly threats against Syrian women and girls, from displacement and starvation to widespread rape and forced marriage," Susskind said. "But Syrian women are more than victims. They are mobilizing urgent solutions that are deeply informed by their knowledge of on-the-ground conditions for war-torn communities."

An estimated 500,000 pregnant Syrian women remain in the war-torn country or are in nearby nations, Osotimehin said. More than 4 million Syrians have fled their country, with women and children making up three-quarters of the refugees.

The U.N. Refugee Agency reported last month that 2.1 million refugees are registered in Egypt, Iraq, Jordan and Lebanon; 1.9 million in Turkey and more than 26,700 in North Africa.  At least 7.6 million people were displaced within Syria in July 2015.

Women were banned from entering a Starbucks in Saudi Arabia after a ‘gender barrier’ wall collapsed, it has been claimed.

A sign posted on the window of a Riyadh store of the coffee chain, in Arabic and English, reportedly read: “Please no entry for ladies only. Send your driver to order. Thank you.”

One woman who said she was refused service at the café wrote on Twitter: “Starbucks store in Riyadh refused to serve me just because I’m a woman and asked me to send a man instead.”

Starbucks denied that the store had a ban on women.

According to the Arabic language daily newspaper Al Weaam, the country’s religious police – the Committee for the Promotion of Virtue and Prevention of Vice – ordered the coffee shop’s management to ban women from the establishment after it found that a ‘segregation wall’ inside the store had given way during a routine inspection around a market in the capital city.

According to Al Weaam, the store’s management told the police that the wall had regularly collapsed because of customer stampedes.

Gender segregation is widespread in Saudi Arabia, with women requiring male permission to work, travel, study, marry or even access healthcare. They are also unable to drive or open a bank account, and must be accompanied by a male chaperone on shopping trips.

A spokeswoman for Starbucks told The Independent that the store was currently being renovated to construct a wall to accommodate single people and families, in accordance with local customs, due to be completed within the next two weeks.

In a statement, the company said: “Starbucks in Saudi Arabia adheres to the local customs by providing separate entrances for families as well as single people.

“All our stores provide equal amenities, service, menu and seating to men, women and families.

“We are working as quickly as possible as we refurbish our Jarir store, so that we may again welcome all customers in accordance with local customs.”

In December, women in Saudi Arabia voted in municipal elections for the first time in the country’s history. Nearly 1,000 females also stood as candidates in the elections.

The tournament continues until February 12th with the participation of 18 Arab countries and 58 clubs competing in eight sports including volleyball, basketball, table tennis, archery, fencing, athletics, shooting and show jumping.

Sheikha Jawaher welcomed the participating Arab delegations to the Emirate of Sharjah and to the UAE. She expressed her happiness at the great assembly of Arabic women, noting that the Arab Women Sports Tournament had become the premier event in the Arab world which supports women sports, saying, "I would like to welcome the participating Arab delegations to Sharjah, wishing them a lively and successful participation in the third session of the Arab Women Sports Tournament. I feel extremely proud of Arab girls and women gathered together on the soil of love, brotherhood and peace, the United Arab Emirates' soil. Let us appreciate the meaning of sportsmanship and compassion during competitions which we aspire to use as a platform to elevate women sports and promote civilised behaviour, expressing our culture, to strengthen human ties." She added, "I would like to thank all the organisers of the tournament; Olympic, Arabic and Khaleeji committees, unions and bodies. You elevate women’s sports, and your unified efforts bring us to international competitions. My brothers, sisters and daughters, I wish you a pleasant stay in the joyful emirate. In the name of God and with His Grace and Blessing, we start the third edition of the Arab Women Sports Tournament." Sheikh Khalid bin Ahmed bin Sultan Al Qasimi, Head of AWST’s Supreme Organising Committee, said, "It’s a great honour to host you in your second country, the United Arab Emirates, and to see you all here for this celebration of Arab women’s sportsmanship. I would like to thank the committee members of AWST 2016 for their support in making this tournament possible and thanks must also go to our sponsors whose support has helped us to make this tournament a success." On behalf of AWST 2016 Organising Committee, Sheikh Khalid bin Ahmed bin Sultan Al Qasimi honoured the late Osman Al Saad, the previous Secretary-General of the Union of Arab National Olympic Committees.