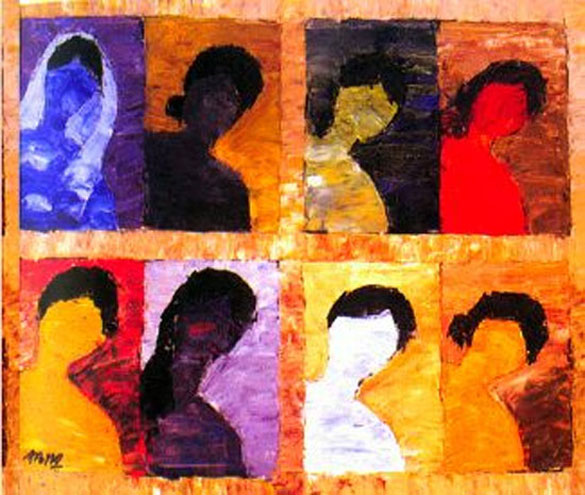 •  11pc Children Out Of School in Lahore: Report

The “Tranquility” campaign of the Ministry of Islamic Affairs has identified increasing activity by women in recent months across Al-Qaeda-affiliated websites, especially sports and music pages, to target young men and women visiting these sites.

Well-informed sources in the campaign have confirmed the presence of the second generation of Al-Qaeda women who disguise themselves on jihadi Internet sites and forums to broadcast their ideas.

According to sources, more and more women are participating in such electronic campaigns and online activities from both inside Saudi Arabia and abroad, although there is a steady decrease in the number of posts from inside the Kingdom.

These women take part in a variety of campaigns to recruit new followers, as well as publish articles, data and movies about their leaders. By sharing subtle religious messages through individual posts across various websites, engaging with people in general dialogue, and broadcasting repeated messages, women have increasingly been able to appeal to individuals without engaging in dialogue or discussions that embarrass their organization and show its weakness. This is especially in light of the success of the “Tranquility” campaign in facing and identifying these individuals via debates.

A social worker is making history with a women's rights campaign in Pakistan, accusing the justice system of ignoring domestic violence.

Tabassum Adnan has set up the country's first all women jirga -- a tribal forum of justice.

Adan is dealing with a number of violent cases including murder.

Warning: Some of the images in the report may be disturbing.

According to GallupPakistan survey, 60% Pakistanis believe that women should be ready to leave their employment for the sake of their families.

A nationally representative sample of adult men and women, from across the four provinces was asked “Please tell us, how much do you agree or disagree with the following statement: Women should be ready to leave their employment for the sake of their families?” Responding to this, 29% said they completely agreed, 31% said they somewhat agreed and 21% replied they neither agreed nor disagreed. 13% of the respondents mentioned they somewhat disagreed compared to 4% who said they completely disagreed. 2% did not respond.

Money may not grow on trees, but it certainly can be raised from mud, literally. This is the message being sent across to Saudi women by Aydeena, an organization known for promoting traditional Saudi handicraft.

In a unique program that will help Saudi women make money, the organization is making efforts to impart training in making clay products for the first time in the Kingdom.

Aydeena’s foray into clay products follows its success in similar ventures, Ruwaida Al-Fadl from the organization said, and explained that training in clay production can introduce Saudi women to different job markets and boost their financial sustainability.

She said the training will be imparted and supervised by Saudi women experts who have specialized in handicrafts. “Aydeena will give priority to women from underprivileged backgrounds,” she added.

Stating that the training program with innovative ideas will be supported both by the private and public sectors, Al-Fadl said Aydeena encourages innovation among women to facilitate the creativity in them to blossom and come out with original products and not merely copy what is already available in the market.

“We want people to buy the product not only because of the context in which they were made, but because they are of good quality and they genuinely like them,” she said.

All Aydeena handicraft products reflect the true Saudi culture and they are in great demand from Saudi society. Gahwa cups designed with bits of pottery and seating material for Majlis are popular handicrafts made by Saudi women through Aydeena.

The beads they produce come in various forms and colors and they are used to make chains, bangles, earrings and other ornaments based on customer preference. “We always play with earth. Why not derive maximum benefit from this natural element?” asks Al-Fadl.

11pc children out of school in Lahore: report

LAHORE: Almost 11 per cent 6-16 years of age children in Lahore are out-of-school despite Punjab government’s massive enrollment drives aimed at bringing all out-of-school children to schools.

This was revealed in the Annual Status of Education Report (ASER) 2013 with reference to the Lahore district conducted by Idara-i-Taleem-o-Aagahi at the All Pakistan Women Association (APWA) here on Thursday.

The report stated that there was a great gender gap in learning as boys outperformed girls in numeracy and literacy skills. It reported higher incidence of private tuition trend in private school students. The report said the children enrolled in private schools were performing better compared to their government schools counterparts.

It stated that there were more qualified teachers in private schools as compared to government schools.

Speaking at the report launch, University of Management and Technology’s education department chairman Sajid Masood explained thought-provoking patterns and challenges in all Punjab districts in comparison with the Lahore district.

Former director of Public Instruction, Punjab, Jamil Najam said the education sector had been facing crisis for many years and stressed that the community must come forward to demand provision of quality education.

Officials from the district education department, Iftikhar Cheema and Ms Robina, discussed the situation of education in Lahore district.

APWA chairperson Ruhi Sayid said that proper development and grooming of the future generation was lacking with the downfall in education.

Islamabad: Shamim Kiyani, alleged former wife of Senator Azam Hoti, attempted suicide by trying to set herself on fire just outside the office of the inspector general Islamabad police on Thursday.

Earlier, she had complained that her alleged husband, Hoti, was not paying her Mehar. Police however was able to stop the lady and shifted her to the women’s jail. According to reports, Shamin reached outside the office of the inspector general of ICT police on Wednesday afternoon and tried to meet him in person. However, she was not allowed to meet IG Sikander Hayat, said the sources.

It was then that she attempted to set herself on fire in front of the police station. The policemen deputed at the gate of the IG office overpowered her before she could light herself and shifted her to Kohsar Police Station. Later on, the lady was shifted to the women’s police station where police booked her under section 325 PPC. “The lady attempted suicide in front of the office of inspector general of ICT police. The policemen saved her life. An FIR has been lodged against her,” a spokesperson of ICT police told Daily Times.

Meanwhile, Hoti has refused to accept Shamim as his ex-wife and recorded his statement in the department concerned.

A draft law before Iraq's parliament that would legalise the marriage of girls as young as nine and restrict women's rights in matters of parenting, divorce and inheritance is a political move to define the identity of the country's majority Shias before next month's election, officials say.

The law, which was approved by Iraq's council of ministers two weeks ago, has generated widespread debate in Iraq six weeks before the first national poll since US forces departed. International human rights groups have described it as a disastrous regression in the status of women.

The 30 April ballot is set to be contested in a cauldron of geopolitical issues, such as the reinvigorated insurgency in Anbar province, the raging war in neighbouring Syria and a continuing dearth of services. But social issues – brought to prominence by the proposed law – are now also likely to feature in the debate, with secular and Islamic leaders anxious to define the social fabric of Iraq's largest sect.

The law was put forward by Iraq's justice minister, who heads the Fadila party, which has seven seats in the national parliament and is allied with the prime minister, Nouri al-Maliki. Its endorsement by the council of ministers was a prerequisite for a vote in the 325-seat assembly. Observers say Iraq's Shia religious authorities are split over how to react to a debate that has roots in Islamic jurisprudence.

Known as the Jaafari personal status law, a reference to the Shia imam of that name, the draft law legalises marital rape and gives men a strict guardianship role over their wives. It also gives automatic custody to fathers in divorce cases that involve children of more than two years old. Most controversially, it allows girls to divorce from the age of nine – a clause that means they must first have been married.

Professor Hassan al-Shimari, a political analyst at Baghdad University, said: "This is an attempt by Fadila to show Iraqis that they represent the Shia and want to make their identity clear before the election. Everything is changing on a daily basis, and the division between the Shia themselves keeps being redefined."

Maliki, who is standing for a third term as leader and is likely to cast himself as the redeemer of a country threatened once again by a Sunni insurgency, has yet to declare his position on the draft law.

He has sent the proposal to committee, a move analysts say is aimed at nullifying it as an election issue, while allowing Maliki to avoid the appearance of conflict with a core part of the Shia constituency.

Iraq's Shia leaders – including Ayatollah Ali Sistani, whom the majority of the country's Shias follow – have so far not weighed into the debate.

Governments in post-Saddam Iraq are typically formed after many months of horse-trading, and there is a sense in Iraq that the law would be seriously considered only if Maliki ended up needing Fadila's support.

"He has never said that he is with the law or against it," said Maliki's spokesman, Ali al-Moussawi. "What we have done is democratic. We took this to be discussed, then voted on. We didn't object straight away.

"Some media outlets show Iraq as if it has gone backwards, but this isn't true. In the west, people are talking about gay marriage. This is something we would never discuss and it is against our religion, our nature, yet we don't say that they are backwards."

"Even if this law will be approved, it will be optional for Shia. This law will only be implemented on Shia, and they have the right to take it or not when it is approved."

Safia al-Suhail, one of 82 female MPs in Iraq's parliament, said: "I hope they will put this to a vote in the parliament so it will be rejected by a majority.

"This law means humiliation for women and for Iraqis in general. It is a disaster not just for women but for children. These children shouldn't be exposed to such an ugly situation. It shows that we are going backwards. I hope [the senior Iraqi Shia cleric] Ali al-Sistani will strongly react to it if it is ever taken to the parliament."

"This personal status law would only entrench Iraq's divisions while the government claims to support equal rights for all."