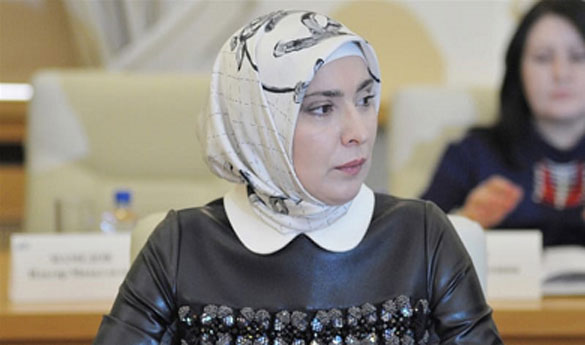 Photo: Aina Gamzatova says her candidacy should not be viewed as 'an attempt of Muslims to create a competitor' to Putin [Courtesy of Gamzatova's website]

•  Muslim Storefront Aims To Encourage Women To Be Entrepreneurs

by Mansur Mirovalev 24 hours ago

Moscow, Russia - AinaGamzatova, a 46-year-old woman from Dagestan, has made it official. She wants to run against Russian President Vladimir Putin in the March 2018 election.

Hundreds of her supporters gathered around her to celebrate in Makhachkala, Dagestan's capital, on Saturday, two days after she confirmed her bid in a Facebook post.

Her husband, AkhmadAbdulaev, is the Mufti of Dagestan, Russia's troubled province where a confrontation between fighters, clans and federal forces has killed thousands.

She belongs to a Sufi order that has tens of thousands of followers and whose leader, Said-AfandiChirkavi, was killed by a female suicide bomber in the Caucasus in 2012.

Muslim leader Said Muhammad Abubakarov, Gamzatova's first husband, was blown up in his car back in 1998. His killers have never been found, but he publicly lambasted "Wahabbis" - a term Gamzatova often uses to describe the fighters she wants to get tough on.

They are "duplicitous" and "blood-thirsty", she has said in books and speeches, despite death threats and the killings of other Sufi-affiliated figures in Dagestan.

While some say she should not step outside her husband's shadow, others applaud her determination.

"What about the moral teachings that a woman can't even leave her house without her husband?" PatimatIbragimova, an observant Muslim mother of two from Dagestan's Makhachkala, told Al Jazeera. "Or she can, and the law is for us, mere mortals?"

Aisha AnastasiyaKorchagina, an ethnic Russian convert to Islam who works as a psychologist in Moscow, said: "She was brave enough to use her legal right, that is granted to every Russian national, to run for president, she is brave enough to run a decent election campaign."

Some see her campaign - irrespective of its results - as a way to boost the image of Muslim women in Russia and to attract attention to the needs of impoverished, overpopulated and multi-ethnic Dagestan.

"Even if she loses, people will know that a girl in a hijab [a headscarf worn by many Muslim women who feel it is part of their religion] is not just a mother or a woman, but is also an educated, wise and respected woman," former Olympic champion in boxing and Dagestan's deputy sports minister GaidarbekGaidarbekov wrote on Instagram.

Not winning, but taking part

It is something of a given that Gamzatova has no chance of winning, even if every one of Russia's 20 million Muslims votes for her in a country of more than 140 million people.

"Of course, she won't become president, it's stupid to even discuss it," wrote ZakirMagomedov, a popular blogger from Dagestan.

But, she may receive a high number of votes in Dagestan and the Northern Caucasus - something that will ruin Putin's image in the unemployment-addled region that heavily depends on federal subsidies and where – according to election monitors - officials routinely resort to vote rigging and coercion of voters.

"She will definitely get a majority vote - and Putin won't get his traditional 146 percent from the republic," Magomedov wrote, referring to a joke among Kremlin critics about the percentage of Putin's loyalists.

"This is an exclusively PR step of a rather small scale" in Russia's political landscape, Ekaterina Sokirianskaia, a Northern Caucasus expert and director of the Conflict Analysis and Prevention Centre, a Moscow-based think-tank, told Al Jazeera. "The more different candidates, especially women, the better, and she is a Muslim woman, why not?"

Gamzatova, who did not respond to Al Jazeera's request for interview, is by far the most surprising hopeful in the presidential race among a string of nominal rivals and a couple of opposition figures whose ratings trail far behind Putin's.

So far, Gamzatova's statements are limited to catchy but unsubstantial declarations.

"There is a good phrase, 'A house divided cannot stand'," she wrote on Facebook Wednesday. "Our country, Russia, is our home, and if we divide ourselves into Muslims and Christians, Caucasus natives and Russians, our country's government will not exist."

But one part of her election campaign is loud and clear: she wants the Kremlin to get tougher on fighters who want to establish a separate state in the Northern Caucasus under Islamic law.

Her candidacy "should not be seen within a clerical context or an attempt of Muslims to create a competitor to Vladimir Putin", she wrote in a piece published on Friday on Islam.ru. "It is a desire to publicly announce and support on the federal level a harsh anti-Wahhabism stance that both local authorities and some federal officials responsible for the region have tried to silence in recent years."

The rise of armed groups in Russia dates back to the early 1990s, when hundreds of fighters from the Muslim world joined separatists in neighbouring Chechnya.

Many were Saudis, and their doctrine outlawed Sufis as "polytheists" who venerate "saints" and holy sites.

Sufism has deep roots in the Northern Caucasus, where it helped alleviate inter-ethnic tensions and cement resistance to czarist armies and Communist-era efforts to uproot Islam.

The fighters alienated some Sufi separatists in Chechnya who preferred an alliance with the Kremlin. One of them was RamzanKadyrov, Chechnya's current pro-Kremlin strongman.

In Dagestan, the fighters started Europe's "most violent conflict" before the 2014 hostilities in Eastern Ukraine, the International Crisis Group think-tank said. In 2012, the conflict killed at least 700 people and wounded another 525, it said.

Security forces fuel violence with abductions, torture and extrajudicial killings of people merely suspected of membership in "radical" groups, Human Rights Watch has said. Even if a man is blacklisted by mistake, threats, constant interrogations and beatings in detention force him to join the fighters, according to the rights group.

Since 2013, North Caucasus fighters started pledging allegiance to the Islamic State and other groups in Syria and Iraq, and flocked there in droves.

However, Gamzatova believes the problem is far from solved, despite attempts by regional authorities to start a dialogue with fighters.

His statement comes in the backdrop of Ishrat Jahan, a petitioner in the triple talaq case, joining the Bharatiya Janata Party (BJP) in Kolkata.

"Ishrat Jahan is a fearless lady and has taken up a right cause, which is within the Constitution of India. Her courage is an example of Indian women and we welcome her in the BJP. We would like more Muslim women, who identify with India and its history as their own, to join politics. The BJP would welcome them," Swamy said.

He also said that the BJP was only against those Muslims who consider themselves as descendents of Muhammad Ghori and Mahmud Ghazni.

"This development is an answer to those who say that the BJP is against Muslims. The BJP has never been against the Muslims. We are for those Muslims who accept that their ancestors were Hindus, which is what DNA studies show. When you claim that you are descendents of Muhammad Ghori and Mahmud Ghazni and proud of Aurangzeb then you don't belong to us; you go to Pakistan," Swamy said. (ANI)

The decision by Saudi authorities on Saturday to open sections for women in the Kingdom’s courts will facilitate procedures for females, especially in family and marital cases.

Minister of Justice Walid Al-Samaani approved the opening of new women’s sections in notary offices, and the creation of special areas to receive women to preserve their privacy.

He also directed the quick preparation of trained female staff to work in women’s sections and notary offices to provide the necessary services with the required speed and accuracy.

Sawsan Al-Qadhi, a Saudi lawyer, believes that there is still a long way to go toward involving women in the Saudi judicial system: “This decision can be helpful in providing assistance for females and provide jobs for female graduates, but its ultimate impact is not enough for us as legal practitioners and lawyers.”

She added, “It is not unusual for women to work in courts in Saudi Arabia; they have always been there, but in charge of minor responsibilities like reconciliation, checking, and guarding. I surely support opening up new fields of work for women, but I believe that women should have decision-making power just like men. We see young Saudi women working everywhere, but the work mechanism always depends on men.”

Asked about the future of women working in courts, she answered that women may get the chance in the future to work as judicial assistants but they may not be able to get positions beyond than that; it has to do with judicial law, which is known to be a complicated issue.

The Ministry of Justice confirmed that these sections will begin with the opening of a number of these women’s sections in notary offices in Riyadh, Makkah, Madinah, Jeddah, and Dammam, according to Abdul Aziz Al-Naser, an adviser to the minister of justice.

Al-Naser said in an interview on Saudi TV that these jobs will be offered to Saudi females with master’s degrees in different fields, administration, Islamic law, and social disciplines.

He added that this step is unprecedented by the ministry, and it will constantly be evaluated to examine the chance for expanding the female staff, whether in number or position.

A military court in Israel indicted a Palestinian woman who was filmed alongside her more famous cousin slapping and harassing IDF soldiers standing guard in a an Arab village.

NourTamimi, 21, was indicted on Sunday on charges of aggravated assault of a soldier and preventing soldiers from carrying out their duties. She likely will remain in prison until the end of her legal case.

NourTamimi was filmed with her cousin AhedTamimi, 16, and her aunt NarimanTamimi earlier this month slapping and harassing the soldiers in the village of Nabi Saleh in an apparent attempt to provoke a violent response. The video went viral on social media.

It is believed that Ahed and her mother also will soon be indicted on similar charges. The court reportedly is investigating previous encounters the teen has had with Israeli soldiers

The Tamimis are well-known anti-occupation activists. Two weeks ago, Israeli troops shot a male cousin, 15, in the face with a rubber bullet, and he was for several days in a medically induced coma, an incident that the family says prompted the women to push the soldiers away from the family home.

AhedTamimi is well known as a leader of youth protests against Israeli soldiers in Judea & Samaria.

Tamimi and her family attack a soldier who they claimed tried to detain her brother. You can see Ahed biting the soldier. (NBC)

The video and her arrest set off wide debate within Israel, among some who felt the soldiers should have acted more quickly and forcefully; others who insisted they showed admirable restraint; and still others who felt Israel is persecuting the Tamimi family.

Muslim Storefront Aims To Encourage Women To Be Entrepreneurs

By VIRGINIA ALVINO YOUNG • 4 HOURS AGO

A new retail storefront is the latest effort by the Muslim Women’s Association of Pittsburgh to empower women and support its mission.

The association opened a Muslim women and children’s shelter three years ago, and helped finance it through the sale handmade goods like knit ware, quilts and pottery. Now, they’re selling those items at the FEW OF A KIND store, which opened in Oakland in September.

Executive Director Sarah Martin said her organization sees their faith as being one which empowers women.

“Muslim women, since the days of the Prophet, have been encouraged to be educated, to work, and to be producers, and so we’re keeping a long line of traditional Islamic values,” said Martin.

The organization also provides classes for women to work on leadership and financial skills.

“We encourage women to be entrepreneurs and we provide a space where they can bring their goods and develop concepts for small business,” said Martin.

The store, located at Craig Street and Centre Avenue, also serves as a Muslim bookstore, and interfaith community space for lectures and classes.