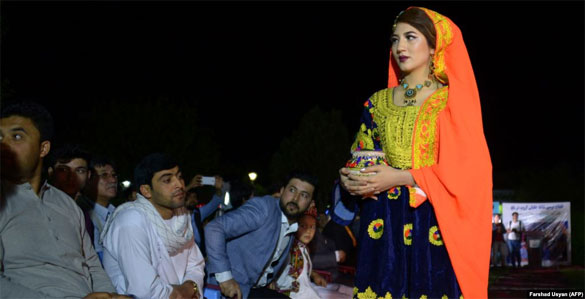 FILE: An Afghan model displays her outfit at a fashion show in the northern Afghan city of Mazar-e Sharif in April 2018.

A northern Afghan province that once boasted promising business opportunities for women has been hit especially hard by the coronavirus pandemic.

Officials and business leaders in Balkh, a strategic province bordering Central Asia, say the coronavirus pandemic is pushing Afghan women and their businesses to the brink.

Nearly half of Balkh’s hundreds of women-owned businesses, which previously employed more than 2,000 women, are still shuttered weeks after coronavirus restrictions were lifted.

Nasir Ahmad Qasimi, CEO of Balkh’s Chamber of Commerce and Industries, tells Radio Free Afghanistan that a month after restrictions were lifted in Balkh, its effects are detrimental, leaving business owners concerned for their future.

“Our female business owners are not active at the moment,” Qasimi said. “In the past four months, 100 percent of female-owned businesses were halted due to the pandemic and half of those businesses are currently not in operation.”

Most of Balkh’s businesses run by women focus on making handicrafts and clothing that is then sold at local markets. An exhibition marking International Women’s Day in March saw more than 240 businesses showcase their products and highlight the potential and value of Afghan women in business.

But women in Afghanistan are finding it difficult to get business going like before the pandemic. Women business leaders in Balkh say their businesses suffer from a lack of consumer demand, closed borders, and the suspension of cargo flights to Western markets, where Afghan handicrafts often reaped handsome profits.

Sima Hashimi owns two textile workshops in Balkh’s capital, Mazar-e Sharif. She decided to reopen them two weeks ago once lockdown restrictions were lifted. But she says her businesses are now producing only half as much as they produced before the pandemic because of a lack of consumer demand.

“Most female business owners are in a similar situation, resorting to loans from the bank in order to continue operations,” Hashimi told Radio Free Afghanistan.

She says the women in Mazar-e Sharif who make handmade rugs, shoes, and bags have slowly started working again, but things are not the same. “Many women have lost their businesses and gone bankrupt because of the lack of demand,” Hashimi said.

Sher Ahmad Sipahizada, provincial director of the Industry and Commerce Ministry, says his office is looking into helping women market their wares by creating exhibitions while also transitioning to the production of different goods, such as dairy products.

Balkh, which borders Turkmenistan, Uzbekistan, and Tajikistan, has emerged as a central hub for commerce, trade, and local craftsmanship in northern Afghanistan.

While official figures show Afghanistan to have less than 40,000 confirmed coronavirus cases and over 1,000 deaths from COVID-19, the actual tally from the pandemic is thought to be much higher. This week, the results of a survey conducted through more than 9,000 antibody tests estimated that some 31.5 percent of Afghanistan’s estimated 32-million population has contracted the coronavirus.

The World Bank expects economic growth in Afghanistan to decline sharply this year. It expects a vast majority of Afghans to “to fall under the poverty line due to the severe impacts of the pandemic on incomes and jobs.” 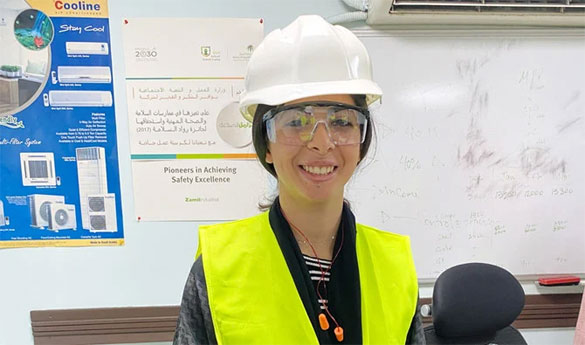 Jeddah - Yasmine El Tohamy - JEDDAH: A young Saudi is setting the pace by becoming the only woman working at a manufacturing plant as a digital transformation consultant for GE Digital in the Kingdom.

Rawan Abukhaled, 23, has paved the way for hopeful young Saudi engineers to not be afraid of being the only woman in the room.

“I’m probably one of the first women to join the industry in the Kingdom,” she said. “I want to be the best representation of a female Saudi engineer in this field, so everyone around me thinks, ‘Hey, we need to hire more women.’ I’m constantly trying to get that idea through,” she added.

Abukhaled is passionate about making change, and her job depends on it. She is keen on providing companies with digital solutions that help them to cut costs and raise productivity.

“Today, I’m learning in the field hands-on, rather than in an office. And for soft skills, this is a client-facing job. So, I am in situations that challenge me to grow, especially in my interactions with customers. I’m the only local or regional person on the ground, so the (GE Digital) team in the US relies on me to go to customer sites, and that helps me grow both my technical and soft skills.”

She is aware of how male-dominated the industry is, not just in Saudi Arabia but around the world. She has paved the way for hopeful young Saudi engineers to not be afraid of being the only woman in the room.

The industrial and systems engineering graduate gained a sense of how much she could do for women when she studied at Virginia Tech, US. She took part in a campaign to become the vice president of the Saudi Student Club and succeeded in becoming the first woman to be elected to the role in 80 years.

Abukhaled said that she was flabbergasted at the number of women approaching her to ask what it was like and the impact it left on female students around her. “I was the vice president of a student club. Even something that small inspired women.”

When she was growing up, Abukhaled wanted to get into medicine. “As I got older, I realized I wasn’t that great in biology and I was more interested in physics and math, so I knew engineering was a better fit for me.”

Her current job with GE Digital allows her to work in the two areas she feels strongly about: Technology and people. “There’s a geek side to me that likes the math and problem-solving, and the other side of me that loves the social network and interacting with people.”

Her father has supported her throughout. He was an industrial engineer, which ended up being a great asset as the two of them shared common interests. “We are a lot alike. He became an influential leader in a multinational organization, and I want to follow in his footsteps. He’s supported me every step of the way, ever since I was a little girl.”

These were the details of the news Young Saudi woman takes pioneering role in male-dominated engineering industry for this day. We hope that we have succeeded by giving you the full details and information. To follow all our news, you can subscribe to the alerts system or to one of our different systems to provide you with all that is new.

It is also worth noting that the original news has been published and is available at Arab News and the editorial team at AlKhaleej Today has confirmed it and it has been modified, and it may have been completely transferred or quoted from it and you can read and follow this news from its main source.

New Delhi: The Special Investigation Team (SIT) of the Central Crime Station (CCS) under the Hyderabad police on Thursday re-registered a sedition case against two women from Saidabad which was previously registered by the Saidabad police last year.

“We have re-registered a sedition case against the women. The case will be investigated by SIT of CCS,” Avinash Mohanty, joint commissioner of police (detective) told the Times of India.

These two women are Muslim cleric Maulana Abdul Islahi’s daughters, Shabista and Zille Huma. They were booked in November 2019 for organising a special congregation Qunoot-e-Nazilah against the Supreme Court’s verdict in the Ayodhya title dispute case.

After going through videos of the congregation, sub-inspector Din Dayal Singh of the Saidabad police had lodged a complaint against the women, accusing them of promoting enmity on ground of religion and sedition, and registered a case last year.

They were also accused of attacking policemen at the Saidabad police station and a non-bailable warrant is pending against them.

The re-registration comes on the heels of Ayodhya being back in the headlines, after Prime Minister Narendra Modi laid the foundation stone for the Ram temple that is being built where the Babri Masjid once stood. In November 2019, the Supreme Court ruled in favour of the Hindu party in the Ayodhya title dispute case and paved the way for the Ram temple’s construction.

The sedition law, according to the Supreme Court, is only supposed to be applied when there has been a direct incitement to violence. However, police across the country continue to misuse it to suppress dissent.

A young Palestinian woman has succumbed to the injuries she sustained from fire by Israeli forces in the occupied northern West Bank city of Jenin.

According to Palestinian media, clashes occurred between Israeli forces and Palestinians in al-Jabriat district in Jenin early on Friday.

The 32-year-old victim, identified as Dalia Ahmed Soleiman Samudi, was shot in the chest in front of her house when Israeli soldiers opened fire at her.

Mahmoud al-Saadi, director of the Palestinian Red Crescent in Jenin, said the Israeli forces also opened fire on the ambulance carrying the victim.

Tensions have been running high in the occupied territories amid plans by Israeli Prime Minister Benjamin Netanyahu’s regime to annex the occupied West Bank and the Jordan Valley. The plan has been delayed but it has not been called off.

Netanyahu has been driven ahead by President Donald Trump of the United States, who unveiled a plan for the Middle East in January that effectively sidelines the Palestinians.

The Palestinians want the occupied West Bank as part of a future independent Palestinian state with East Jerusalem al-Quds as its capital. Trump’s plan envisions Jerusalem al-Quds as “Israel’s undivided capital” and allows the Tel Aviv regime to annex settlements in the occupied West Bank and the Jordan Valley. The plan also denies Palestinian refugees the right of return to their homeland, among other controversial terms.

Israel’s unlawful annexation push has drawn widespread criticisms from the entire international community, including the regime’s closest allies. And it has angered the native Palestinian population.