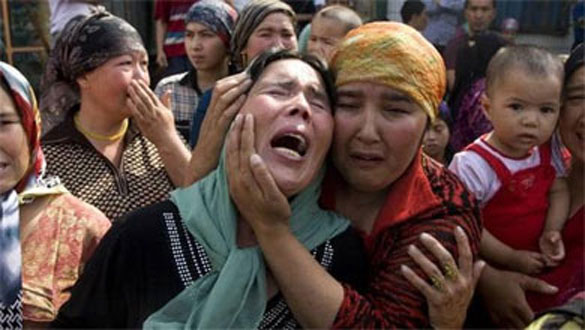 Uyghur women grieve for their men who were taken away by Chinese authorities in a crackdown on the Muslim minority group. Photo / News Corp

•  Women Held In China’s Vast Network Of “Re-Education” Camps For Political And Religious Prisoners Have Made Shock Claims About What Was Done To Them.

On August 7, 2019, Al-Qaeda's Al-Sahab media wing released a video featuring a speech by Al-Qaeda leader Ayman Al-Zawahiri titled "The Battle of the Hijab." In the video, Al-Zawahiri addresses Muslim women and warns them of the war raging against the Islamic nation that seeks to force them to abandon their religion and hijab ("head covering").[1]

The 12-minute video, which is the fourth episode of his da'wa ("preaching, invitation") series, shows the Al-Qaeda leader in the usual setting, in what appears to be a studio, sitting behind a table on which a Quran is open. Al-Zawahiri begins by addressing "Muslim sisters," particularly those who wear the hijab, saying the current war rages against the Islamic ummah at all levels – militarily, politically, ideologically, culturally, educationally, or economically and others. He says: "The reason behind this war is the danger the Muslim ummah poses to the existence of the modern global system, which is controlled by the leading [international] criminals."

Comparing the Islamic nation with other non-Islamic nations, he says that the nation of Islam is a nation of monotheism, chastity, and jihad for the sake of Allah, while other nations believe in polytheism, lechery, and invasion. He then accuses other nations of "trying by all means to exclude the Islamic ummah or cause it to deviate from this religion and its shari'a." He says that non-Islamic nations wage wars of ideas and ideologies and other types of wars, and that they want Muslims to abandon their monotheism and become "secularists, irreligious, atheists, Christians, communists, and utilitarians," desert chastity, purity, virtue, and integrity, and indulge in lust and pleasures.

In a stark criticism of the United States and Western countries, Al-Zawahiri says: "Isn't it awfully strange that those who bombarded Japan with atomic bombs, killed five million people in Vietnam, occupied our countries, smashed the Ottoman state, planted Israel in our midst, divided us into more than 50 countries, are stealing our wealth and even the wealth of the whole humanity, are disregarding the destruction of our planet by climate change for their our own interest, are supporting every tyrant and corrupt powerful leader in our countries, and then lecture us about human rights, freedom, civilization, and justice?"

"Is it not strange that the world is controlled by five criminal powers through their international legitimacy, and then they lecture us on democracy and equality?" he asks.

He then praises the role of Muslim women in the Islamic community and their steadfastness, patience, and suffering, especially if their sons or husbands are killed, arrested, or lost. He commends Muslim women and girls who supported their male siblings who participated in jihad, incited them to take part in protests against oppression and tyranny, or suffered due to their imprisonment.

Al-Zawahiri goes on to say: "Oh noble and honorable women, you are one of the first targets in the war against our Islamic ummah. They will try to reach your faith and conviction using every loophole so that they can penetrate [your faith]."

Women Held In China’s Vast Network Of “Re-Education” Camps For Political And Religious Prisoners Have Made Shock Claims About What Was Done To Them.

China is forcibly sterilising women held in its vast network of “re-education” camps which house political and religious prisoners, survivors have claimed.

One woman, who was held for more than a year, has told French television that she was repeatedly injected with a substance by doctors in a prison in the far-west region of Xinjiang.

“We had to stick our arms out through a small opening in the door,” Gulbahar Jalilova, a 54-year-old former detainee, told France 24.

“We soon realised that after our injections that we didn’t get our periods any more.”

She and up to 50 other women were crammed into a tiny cell “like we were just (a) piece of meat”, she said.

Speaking to an Amnesty International conference recently, another woman, Mehrigul Tursun, 30, told a similar story of being unknowingly sterilised.

She felt “tired for about a week, lost my memories and felt depressed” after being administered a cocktail of drugs while imprisoned in 2017, she said.

After several months she was released, having been diagnosed as mentally ill, and now lived in the United States. Doctors there later told her that she had been sterilised.

Both women are Uyghur Muslims, an ethnic minority group that has been specifically targeted by Chinese authorities for “re-education”.

An estimated one million Uyghurs are held in prison camps across the country. Members of the Falun Gong religious movement have also been detained in large numbers.

In the past, Uyghur women who were detained in camps and now live in western nations have told of being forced to abort babies — including late in the term of pregnancies.

The Population Research Institute, which advocates for a born on intrusive and inhumane population control programs, accused China of forced sterilisation on a large scale.

“The current Uyghur population is less than 1 per cent of China’s total population,” the group said. “To restrict and control the natural growth of a population of this size in any country is to totally annihilate and genocide them.

“Therefore, the Chinese birth control policy of forced abortion and sterilisation of Uyghurs is not a policy of ensuring the overall quality of Uyghur population.

“On the contrary, it is to gradually exterminate them by imposing all the political, economic, and social means and restrictions.”

China said those arrested — who have faced no charges or convictions — pose a risk of future extremism.

But the country’s large-scale program has attracted international condemnation, accusations of brutality and torture, and a staggering finding from a recent international tribunal of a sinister organ harvesting black market.

For several years, human rights groups have expressed concern that many of the estimated 1.5 million political and religious prisoners held in camps were part of an insidious human farming system.

In June, the specially formed China Tribunal in London declared there was no doubt that state-sanctioned forced organ harvesting was occurring on a massive scale.

Made up of members from the United States, United Kingdom, Malaysia and Iran, including experts in human rights, transplant surgery and international relations, the independent tribunal heard from 50 witnesses and examined an enormous volume of visual and text evidence over the past year.

The number of operations performed, the incredibly short waiting lists for recipients and the expansion of facilities demonstrated “beyond a reasonable doubt” that “forced organ harvesting has been committed for years throughout China on a significant scale”, the report said.

China has consistently denied it is involved in human rights abuses.

NEW DELHI: Prime Minister Narendra Modi hailed the law against triple talaq as a singular achievement of his government in its second term.

Parliament passed the Muslim Women (Protection of Rights of On Marriage) Act, 2019 in July after the government managed to get adequate support in Rajya Sabha where it doesn’t enjoy majority.

“In just ten weeks, we made big ticket decisions like bringing about a law against Triple Talaq to protect the rights of our Muslim women,” the PM said in his Independence Day address as he listed other decisions like major amendments in the anti-terror law and transfer of approximately Rs 90,000 crore to the bank accounts of farmers under who are beneficiaries of PM Kisan Samman Nidhi Yojana.

“You would have seen how our Muslim daughters and sisters used to live in fear with the sword of triple talaq dangling over their heads. Even if they were not victims of triple talaq, they were constantly haunted by the fear that they could be subjected to it any time,” he said.

The PM pointed out that many Islamic countries had abolished this evil practice long time back. “But for some reason, we were hesitant to give our Muslim mothers and sisters their due rights. If, we can abolish Sati, if we can enact laws to end female foeticide, if we can raise our voice against child marriage, if we can take strong steps against dowry, then why can’t we raise our voice against triple talaq?” the PM asked.

He said the decision on law against triple talaq was taken in the spirit of India’s democracy and Constitution “so that our Muslim sisters get equal rights; so that new confidence is generated in them; so that they also become active participants in the India’s development journey. Such decisions are not for political gains”.

The PM also highlighted the amendments brought to the Protection of Children from Sexual Offences Act. “Now-a- days, we come across incidents of child rights violations all over the world and India will not leave her children vulnerable. A much warranted stringent law to protect child rights was needed and has been enacted,” he said.