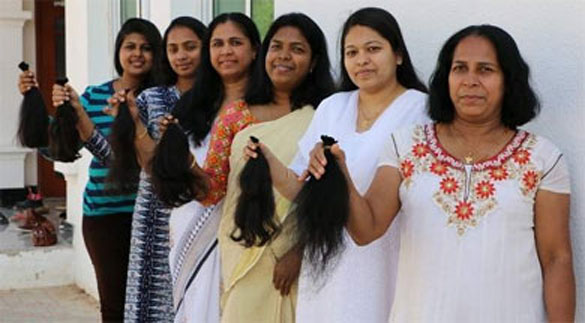 •  Foreign Mothers of Saudis; Children of Saudi Women to Be Counted In Saudisation

•  Quetta's Restaurant Where Women Not Only Cook but Run the Business

•  Iran: 13 Young Women and Men Arrested At a Restaurant

Members of the Mortho Mariyam Samajam, the women's wing of the St George Jacobite Syrian Simhasana Cathedral Al Ain, organised this initiative on Friday, which saw many do away with their locks.

"This is an annual event. We also held a blood donation camp and health awareness class. However, this is for the first time that we have joined the 'Hair for Hope' campaign. It was Mercy Varghese, a member, who thought about this and we all supported the idea. We decided to donate 17 inches of hair. Sadly, I couldn't be part of it as my hair isn't long enough," group secretary Joyce John said.

The organisers said there was an enthusiastic response from church members.

Trustee Sheela Jacob said: "It is a sad and disheartening sight to see cancer patients losing hair. It is a nightmarish experience for them and we wanted to do our bit. With this initiative, we are observing both the breast cancer awareness month and the 'Year of Giving' drive," Sheela said.

"There were many who couldn't be part of the drive as they didn't have long hair," she added.

Standing out among the donors was Surumi Surum, a Muslim participant from Abu Dhabi, who is the only person to completely shave her hair.

Surumi came to know about the event through social media and joined the church's campaign.

"I am a normal housewife but felt there's much I can contribute to the society. I came to know about this initiative and got had support from my family. This is all I can do so I donated all my hair," said Surumi, an inspired member of Facebook page 'Malayali Mums Middle East'.

She had full support from her husband, Shihab, and daughter. "This is for a very noble cause," the husband added while clicking photos as the beautician chopped Surumi's hair.

A mosque committee in Kerala’s Malappuram district has called for boycott of a Muslim man and his family after he allowed his daughter to marry a Christian.

The mosque committee at Kondiparamba issued a circular on October 18, urging its members not to cooperate with Kunnummel Youseph, who had decided to marry off his daughter Jaseela to one Tiso Tomy, according to sources.

The couple got their marriage registered at a local office of the state registration department on October 19.

Catholics in the Prelature of Saint Mary in war-torn Marawi have joined protests against the discrimination of Muslim women who wear the niqab.

A niqab‎‎ is a garment of clothing that covers the face and is worn by Muslim women as a part of a particular interpretation of hijab or modesty.

The ecumenical group "Duyog Marawi" noted that displaced Muslim women in Marawi who wear the face cover are being "discriminated" against, especially at military checkpoints.

Soldiers reportedly force Muslim women to remove their niqab to check their identity.

"We should not be judged because you don’t know us," said Laisa, a Muslim woman who asked that her identity be protected for security reasons after meeting with church leaders.

"This is just a matter of respect for us," she said, adding that the women "feel bad over all mockery of us."

She said soldiers associated the face cover and black clothes worn by women with Islamic State gunmen who attacked the city on May 23.

The five-months of fighting in the predominantly Muslim city left Marawi devastated and resulted in the displacement of close to 400,000 people.

"We hope that the beauty of our niqab will be revered again," said Laisa.

In a statement, Duyog Marawi leader Abdul Mahid Usman Doro said no one deserves to be discriminated against because of one’s practices or beliefs.

"Understanding and respect are two words that must be considered and put into practice especially under serious and sensitive circumstances involving vulnerable persons," added Doro.

The Catholic prelature launched Duyog Marawi in August "to help in the healing and recovery" of people displaced by fighting in the city.

Doro said the women happen to wear black clothing like the terrorists "but they should not be judged or condemned for [wearing the face cover]."

"They too are [internally displaced persons] and victims who deserve our care and respect. They may wear black. They are Muslims. But they are not terrorists," said Doro.

The Philippine government last week declared Marawi "liberated" from the terrorists but have yet to allow the return of civilians to the city.

Col. Romeo Brawner, deputy commander of the military's Joint Task Force Ranao, said the terrorists included wives who were brought by their husbands when they attacked the city on May 23.

The military official said there are no more hostages in the hands of gunmen after 20 were rescued last week. A total of 1,780 hostages have been rescued since the fighting broke out.

Brawner said the military is eyeing the return of thousands of residents displaced by the fighting later this week.

"We will make sure that non-residents will not be able to join them and maybe, you know, create havoc or create a scenario here in Marawi," said the military official.

A young Iranian woman was sentenced to 100 lashes and forced labor in a hospital for a year on the alleged charge of illicit relations.

The trial was held at the fifth branch of the Tehran’s Penal Court on October 20, 2017 for the woman and the man with whom she was accused of having secret relationship.

The accusation was made based on the inspection of her massages in the Telegram social network by the Iranian Cyber Police (FATA).

The woman denied the charge, but the court sentenced her to 100 lashes of the whip and one year of forced labor at a mental hospital. The court also sentenced the accused man to a two-year exile in a remote village in southern Iran.

Rabat – Quebec recently passed a law prohibiting Muslim women from wearing burqas and niqabs while accessing government services such as public transportation. Human rights advocates denounced the bill as racist and antithetical to the multicultural nature of Quebec. The bill faced further backlash when several women mocked it by posting scarf selfies online to contest the law and show support for Muslim women.

The law, known as Bill 62 was adopted by the national assembly on Wednesday, October 18 and will be implemented as soon as July 1 2018. It will bar government employees from wearing face veils while providing public services as well as force citizens to uncover their faces while using public services.

Bill 62 gave rise to many debates and earned itself critics claiming that it deliberately targets Muslim women. Eve Toress, the Public Affairs Coordinator of the National Council of Canadian Muslims (NCCM) said it “carries the risk of encouraging those who seek to sow discord and hatred among Canadians.”

The NCCM additionally raised concerns about the adoption of the bill, contending that “the legislation is an unjustified infringement of religious freedoms.” Muslim community leaders stated that the law will specifically violate the religious freedoms of an estimated 100 women who wear burqa or niqab in the entire province of Quebec.

Since proponents of the law said that it doesn’t target religious symbols and it also applies to people wearing masks, some social media users posted selfies wearing scarves that covered their faces to ridicule the authorities’ decision. Given that Canada is known for its harsh winters, users also posted selfies decked out in winter gear like scarves and raincoats to stand in solidarity with Muslim women.

Foreign Mothers of Saudis; Children of Saudi Women to Be Counted In Saudisation

RIYADH – Hiring foreigners who are mothers of Saudi men and women as well as children of Saudi women will be allowed in those professions which are restricted only to Saudis.

Minister of Labor and Social Development Dr. Ali Al-Ghafis issued an order in this regard, the Saudi Press Agency reported on Sunday.

Employing anyone in this category will be counted as one Saudi employee while calculating the percentage of Nitaqat Saudization program.

“All the previous ministry decisions that are contrary to this order will be deemed null and void,” the minister said while adding that the new order has come into force from the time of its issuance.

Quetta's restaurant where women not only cook but run the business

(Dunya News) - Being the first of its kind in Quetta, Hameeda Ali’s restaurant is breaking stereotypes in a traditional Baloch society where it is not common for women to even step outside their houses.

Opened three months ago, the restaurant was started by Hameeda to help women step into the society as independent individuals.

Although it wasn’t easy for her to start such a venture but the restaurant’s success can be calculated by witnessing its lively environment where daughters of Balochistan can be seen working with determination.

While the visitors include both men and women, from the preparation of the meal to it being served, all tasks are performed by women.

Talking to Dunya News, the manager of the restaurant said that in the beginning the restaurant’s team faced a lot of criticism from the people.

She said there were times of impatience, but she didn’t let the negative remarks let her down.

Continuing to work with fortitude regardless of all the criticism, the women working at the restaurant believe that if you are determined, no power in the world can stop you from achieving success.

For more on this, watch a report by Dunya News below.

The personnel of Khomeini Hospital of Falavarjan, in Isfahan Province in central Iran, staged a gathering on Sunday, October 21, 2017, to protest non-payment of their salaries and rewards for one year as well as the inappropriate management of the hospital.

Some 200 doctors, nurses, and other hospital employees went on strike and demanded their salaries to be paid. (The state-run Fars news agency – October 21, 2016)

It has been more than two years that Iranian nurses are protesting in different cities against violations of their rights.

At least three women committed suicide over the past two days in Iran.

Two young women threw themselves off the Chamran Bridge in Isfahan, central Iran.

“They were 17 and 18 years old,” said a regime’s official. “One has lost consciousness and is unlikely to survive and the other has broken all her limbs,” he added. (The state-run Jam-e-jam website – October 21, 2017)

Another woman in Paveh lost her life at hospital after setting herself on fire a few days ago.

Zahra Hazrati, a professor of sociology, admitted in a conference in June 2015 that Iran ranks first in the Middle East in women’s suicide.

A plethora of social, economic and educational restrictions which lead to women’s poverty and unemployment along with daily suppression of women to enforce the compulsory veil, as well as the absence of any form of government support for women, make women feel desperate and commit suicide.

Iran: 13 young women and men arrested at a restaurant

The State Security forces arrested a group of 13 young women and men at a restaurant in the Iranian capital, Tehran.

The police forces raided a restaurant at Tehran’s 12th district and arrested the youths at mid-day on October 20, 2017 accusing them of Satanism.