International Women’s Day: Thank You the Women of Shaheen Bagh, You Have Awakened the Conscience of the Rest of the Nation

Look at the images from Shaheen Bagh: women of all ages, most of whom have observed the strictest purdah and probably never lifted their heads to utter a word in protest, sit huddled together with their children and friends from majority community, singing songs of nationalism among portraits of Bapu, Ambedkar and waving tricolor flags. What do they want from each other, beyond a safe space, after they have exchanged their fears, told their stories, read out their anguished verses? Do they want to be healed? Do they want silence engulfing their lives as the scars form? Do they want to be heard by those that rule over the Parliament and its institutions? They want all of it. 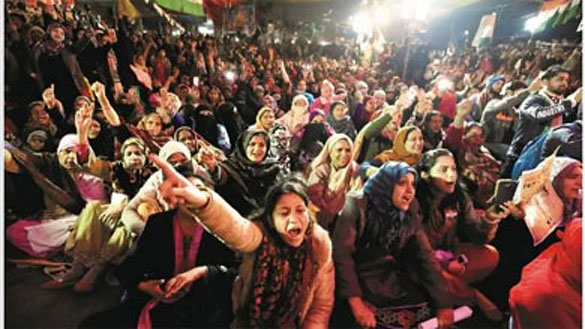 The answers to what do women want beyond a collective resistance against the forces of evil we all see gaining ground in our democracy, are crucial. The collective gathering, for one. It marks out scared and persecuted women as individuals who have no place to go to, from a stubborn collective movement that has slowly empowered not only them but all those of woman born. This is why the collective sit in by the brave women of Shahin Bagh, led by crusty Dadis, was a crucial point during the recent Assembly elections in Delhi.

Today, in a Delhi ravaged by communal clashes, it also raises questions over the law and order machinery while it also sticks to its original demands. Demands about the CAA, a law that to them and many jurists challenges the secular principles and guaranteed equalities our Constitution stands upon. And it demands answers from those who made a controversial bill into a law which coupled with the National Population Register and National Citizens’ Register may cleanse non-Hindu minorities of India.

It is true that movements such as the one that followed the Nirbhaya case or the current one at Shaheen Bagh, may win partial victories initially, but they awaken the conscience of the rest of the nation, and push the judiciary and the executive into action. The new wave of conservatism of the most awful sort that sweeps over the political and religious quarters in India in 2020, is getting increasingly hostile to gains made by women’s movement.

So we had the sad phenomenon of the representatives of the ruling party (some of them even with the rank of ministers) trying to bend words like secular, feminists and liberal into pejoratives and terming the non-compliant media as ‘presstitutes’.

Biryani has become another pejorative to underscore generous meals served by women and men at Shaheen Bagh to sympathisers. Never mind how bravely and warmly the Sikh brethren have also come in with their Langar food, the saffron parties keep pointing fingers at meat and biryani and the eating habits of the minority community that militate against the Hindutva ordained vegetarianism. Never mind that as per available data most of India is not vegetarian.

The war against the minorities has by now become a war against ordinary Muslims. First, they pretended to be upholders of child rights. Women and children, they said, belong within the safety at their homes, not out in the chilly nights. Surely they are being paid to do this.

When that did not gel, the next step was to express concern for the well-being of the infants. Why do they bring their young children to the rallies instead of keeping them at home was a question raised again and again by women leaders of the BJP.

Some ideas are not really new but keep having to be affirmed from the ground over and over. One of them is the apparently simple idea that if mothers, grandmothers and grown up sisters go out collectively to Dharnas, there was no one left at home to care for the infants. Children remain infinitely safer in company of women is a fact we know well. It is children out in the streets in mobs of armed men that one needs to worry about.

Later, when riots raged in bastees of North-East Delhi, we saw images of ten-twelve-year-olds as part of street mobs being actively urged to hurl petrol bombs, throw stones and set fire and loot stores and vehicles. Did we hear anyone waxing eloquent on child safety then?

It is a given that women are intrinsically human as men. Like men, experience shapes them and their capacity to take charge of their lives to challenge injustices of various kinds. Add to that the fact that all human life on the planet, also in India, is born of women. Women carry the imprint of one of the most climacteric incidents in their life: carrying within their bodies a new life for ten months and the long period of nurturing that follows, even to their dying day. Yet there is so little revealed publically that would help people, and women themselves, to realize the great import

Each 8th March, our Netas go all teary-eyed paying homage to Nari Shakti, but whether it be the matter neglecting female farmers’ plight or banning Teen Talaq and suspending the verdict on menstruating women entering a temple indefinitely, they have failed women voters spectacularly.

They have also undone the powers of the new revised anti-rape laws by protecting male rapists from their party from incarceration and refusing even to register FIRs against powerful spreaders of hate messages that triggered the recent riots and left whole families ravaged. However much it may quote ancient proverbs and scriptures about women being goddesses, fact is that on earth, the male crafted, male dominated State has left no stone unturned of late, to ghettoise and degrade female potentialities and focused on them only as wives and mothers in dire need of ‘Sashaktikaran’.

The deepest unwritten text of the Shaheen Bagh sit-in is inclusive in a way only women can create true inclusivity to all they do. Read their demands carefully. They are ultimately not about guaranteeing Muslim women an equality in law. It is simultaneously also about guaranteeing it to all Indians. About reasserting the basic principles of India’s Constitution that separates religion, especially majority religion, from colouring vital state policies in a secular republic.

They have shown in word and gesture that motherhood is not identical with bearing and raising legitimate children. It creates prescriptions and conditions in which choices are made and blocked constantly. This power to make choices and deny what they deem as a threat, is what they carry with them into this historic sit-in. It is due to their authority as true matriarchs that the Shaheen Bagh has become a “modest Magna Carta” as Marx once called the first women factory workers’ march against injustices faced by them in spring of 1913, that we celebrate as the International Women’s Day on March 8th every year.

Patriarchy is the backdrop in which all the foul balls of our history lately have been ending up. So thank you the women of Shaheen Bagh. Thank you for not letting the male State deflect our minds from the core issues of our democracy. For dissolving the hyphens between communities and genders. For reconnecting the battle fronts of caste, class, gender and race and opening the path to true meaningful Satyagraha for the nation once again.

Each one of you reminds me of a poem by Bea Medicine, an Amerindian (Lakota) anthropologist, I once read somewhere and noted down:

A woman of many names