‘I Live in a Lie’: Saudi Women Speak Up 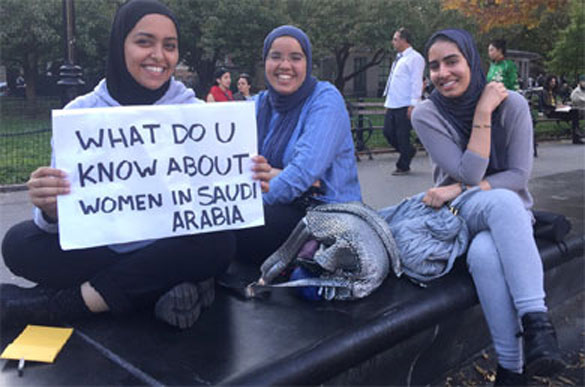 Soon after “Ladies First” was screened, I met these Saudi students in Washington Square Park in New York. Hend, on the left, had watched the documentary and criticized it for portraying her country as a place that oppresses women. “We don’t need to abolish male guardianship,” she said. “We need to teach men how to be better guardians.” Credit Mona El-Naggar/The New York Times

“We’re not allowed to even go to the supermarket without permission or a companion, and that’s a simple thing on the huge, horrendous list of rules we have to follow.”

“The male guardianship makes my life like a hell!! We want to hang out with our friends, go and have lunch outside. I feel hopeless.”

“I don’t mind taking my dad’s approval in things he should be a part of. These very strong social bonds you will never, ever understand.”

These are three of the nearly 6,000 women from Saudi Arabia who wrote to The New York Times this week about their lives.

We had put a call-out on our website and on Twitter in conjunction with the publication of “Ladies First,” a Times documentary I directed about the first Saudi elections in which women were allowed to vote and run for local office.

Saudi Arabia is an incredibly private, patriarchal society. While I was making the film, many women were afraid to share their stories for fear of backlash from the male relatives who oversee all aspects of their lives as so-called guardians. We wanted to hear more about their fears, their frustrations, their ambitions.

Saudi Arabia has one of the world’s highest rates of Twitter use, and our posts rocketed around. We were overwhelmed by the outpouring.

Most of the responses focused on frustration over guardianship rules that force women to get permission from a male relative — a husband, father, brother or even son — to do things like attend college, travel abroad, marry the partner of their choice or seek medical attention. Some women talked about the pride they had in their culture and expressed great distrust of outsiders. But many of them shared a deep desire for change and echoed Juju19’s hopelessness.

There was an angry backlash under the Twitter hashtag لاـ تقولون ـ للنيويورك ـ تايمز, Arabic for “Don’t tell The New York Times.” And there was a backlash to the backlash: “#don’t_tell_theNewYork_times that if your father rapes you and you run away, then you will go to prison, and if they let you out, then they will send you back to him.”

Excerpts from the women’s responses are below, many translated from Arabic. In order to enable women to feel free to speak openly, we gave them the option of anonymity. Where possible, we verified the identity of the respondent or location of her email. In some cases, that proved impossible.

We want to keep the conversation going. Feel free to email us.

I got into an accident once in a taxi, and the ambulance refused to take me to the hospital until my male guardian arrived. I had lost a lot of blood. If he didn’t arrive that minute, I would’ve been dead by now.

Every time I want to travel, I have to tell my teenage son to allow me.

My sister went to a bookstore without taking permission from her husband, and when she returned, he beat her up without restraint.

The door of the school where I work is closed from early morning till noon. There is a man guarding the door. Even if a teacher is done with her classes, she cannot leave. Metal gates keep us as prisoners.

The first three days I spent in solitary, then they transferred me to the general ward. There were women there who committed crimes like killing and stealing.

[My guardian] forbids visits to my female friends or going to shopping malls by myself. It is a complete and total isolation from all the joys in life.

It’s like I’m in handcuffs, and the society, the law, the people [are] against us. That’s why most women choose to marry in their early 20s as a way to escape, and guess what? The man she marries is no different from her brother or father.

He won’t allow me to work, even though I need the money. He also doesn’t provide all my needs. I can’t recall the last time he cared about what I needed or wanted. He is married to four women and completely preoccupied with them, and he doesn’t allow me to travel with my mother. I suffer a lot, even in my social life. He controls it completely and doesn’t allow me to have friends over or go to them. He forces me to live according to his beliefs and his religion. I can’t show my true self. I live in a lie just so that I wouldn’t end up getting killed.

It’s suffocating. I’d rather kill myself than live with it. I hold on to the smallest hope I have that someday this will change.

The System Works for Some

Saudi women have accomplished so much but do not advertise it. There is a long history of women that have worked tirelessly to help the society and build up the country.

I need my father’s or my husband’s permission to travel outside the kingdom, and this is O.K. for me, as I need them to know where I am, especially with the current status of events in the world.

I have lived for a while in the West, and I found that the life of a woman is very difficult, for she has to bear heavy burdens that only a man can undertake. Whereas in our country, the man provides all forms of comfort for the woman.

When will the international media stop interfering in the affairs of the Kingdom of Saudi Arabia and of its women and men and children?

A Future in Guardians’ Hands

I’ve had to give up on a number of educational opportunities because he (my guardian) didn’t think a doctor needed a cultural exchange program or a symposium he didn’t understand. I’ve been trying to have him let me marry the man I love for the past two years.

I’m in charge of people’s lives every day, but I can’t have my own life the way I want.

I had finally gotten a scholarship to get my master’s abroad. And it was my dream, which I waited and worked hard for, for many years, and I got the necessary grades. But because I would have no man — a so-called guardian — with me, my scholarship and travel were rejected. My guardian also forces me to cover my face, even though it should be a personal and religious freedom.

I’m currently struggling with my father and trying to make him approve that I go to medical school. It’s my last year of high school, and I have no idea if he’s going to approve that or not. I have no idea what my future holds. My future is in this ignorant/sexist man’s hands, and I can’t do anything about it.

I am one of the lucky women who had an amazing and enlightened father and wonderful brothers, who do not interfere in my choices and support me all the way.

Having said that, I get angry every time I travel and get asked by the passport official about my permit to travel. It just feels wrong that a middle-aged woman gets questioned every time to travel, while teenage boys are allowed to move in and out without question.

The guardianship thing hasn’t affected my life because I’m not facing any problems with it due to my dad is a very cooperative man and he’s open-minded.

I have the best father in the whole world. He understands what Islamic rules are, and he applies them correctly. For example, I have a goal of building my own early-intervention center for children with disabilities. My dad encouraged me to follow that dream and sent me to study here in the U.S. I know how much hard it’s been on him and my family to let me go, but he came with me first and helped me finding an apartment and all the stuff I needed. Then, when everything was going smoothly, he returned to Saudi. Therefore, I need a guardianship in my life.

I like that I have a guardian who looks out for me and cares for my well-being and defends me and takes on what I can’t handle, and if I make a mistake, he will bear the punishment.

Women now are doctors, engineers, scientists, entrepreneurs, working with men and having a value, and this is all in the past seven years or so. We are advancing. We are moving forward. We just need patience and a chance.

I have never felt in any way that there was something I wasn’t allowed to do. When you grow up in a society like Saudi Arabia, you get used to the rules and you work around them.

Things are changing. It’s subtle, but it’s there and it’s tangible.