Men Are Guardians of Women: Pakistanis’ Collective Idea of Manhood

Last week, outside a shopping mall in the city, two sombre men stood holding a banner that read: “Men are guardians of women.” In other parts of Pakistan, other self-appointed guardians have been busy tearing down posters that women activists put up to announce Aurat March, a series of rallies across the country to celebrate International Women’s Day on March 8. 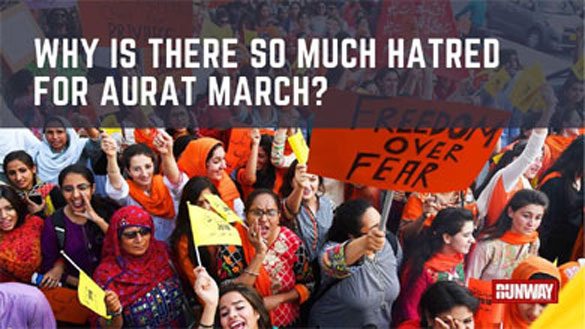 Only in its third year, Aurat March has become the most important day on the calendar for many Pakistani women. I recently asked a roomful of students in their early 20s what was the defining historical feature of their lifetime. After the war on terrorism, the killing of Osama Bin Laden, Malala’s shooting and TikTok, many women said that Aurat March was what had most affected their lives.

But much like the event has politicized many young women across Pakistan, torrents of misogyny have been unleashed by the prospect that women might get together in large numbers in public spaces and not invite a man as their chief guest. Some religious political groups have threatened to disrupt this year’s gatherings; others have announced that they will mark the day as the day of Muslim Women’s Dignity. 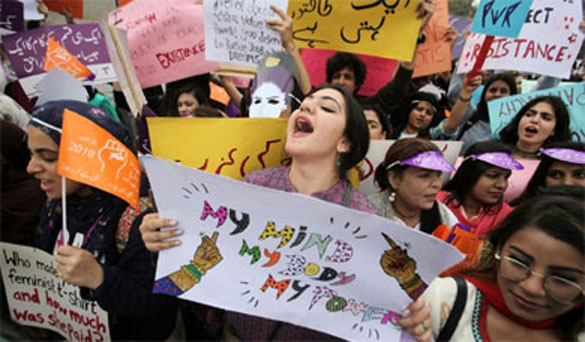 Grown men are asking, frothing at the mouth, what do these women want?

Organizers of Aurat March have put out a comprehensive list of what they want, including safety from sexual harassment, access to property rights and equal pay. But that’s not what men are really scared of. They are worried about hundreds of young women huddling in small groups with paint brushes, markers and stencils to make placards.

The signs from the last march have been giving our men nightmares for a year. The ones from the year before still rankle. These placards and their slogans have poked neat little holes in Pakistanis’ collective idea of “Mardangi,” or manhood.

The first sign that shot “Mardangi” through the heart was, “Warm up your own food,” from 2018. That was so outrageous it caused a small national meltdown, prompting men to draw up their own lists of things women should do themselves: “Sew your own clothes,” “fix your own flat tire.” You can talk about your property rights and harassment in the workplace, but how dare you ask me to press that button on the microwave? You really have it coming.

Things got a lot worse for men during the second Aurat March, last year, when they had to read a poster that said, “How do I know where your socks are?” Another sign that posed a direct challenge to the social order was an illustration of a woman sitting, fully clothed, with her legs open, just like men do. It read, “Look, I am sitting properly.” Young girls are told over and over again to sit properly, with their legs closed. That a woman would claim a full seat has been called “woman-spreading” and declared vulgar and repugnant to our culture.

Then there’s the sign that says, “My Body, My Consent.” After the human rights activist Marvi Sirmed repeated the slogan on TV earlier this week, one of the panellists, a TV and film writer, lashed out: “What is in your body? Have you seen your body? A man would not spit on your body!” Then he called her names that are usually never uttered on the air. Many journalists condemned the outburst, but the panellist became a hero of sorts to some men for, as they saw it, putting Ms. Sirmed back in her place. Other TV programs scrambled to invite him to give his side of the story.

But really, what has had the patriarchy drop all pretence of civility is a placard that asked men to keep to themselves selfies of their penises. “Lahol Wala …” was the reaction of a senior journalist on live television as he started to recite a prayer that’s meant to ward off Satan. Then he went on to proclaim that the slogan was a violation of his basic human rights and the judiciary should take action.

Yet look into the inbox of any woman in public life, and you will see a lot of unsolicited pictures of men’s genitalia or references to it. And for a young woman to hold up a placard saying to stop doing that is seen as a threat to the national moral order.

What these placards have achieved is remarkable. They have taken the discussion about women’s rights from Parliament, the courts and the workplace straight into the kitchen and the bedroom. They have challenged the most sacred institution of all: family. More than 1,000 women are murdered in the name of honor in Pakistan every year, the overwhelming majority of them by relatives.

Pakistan has had a glorious history of women’s activism. Women have confronted military dictators and fought on the streets against discriminatory laws. But a new generation of female activists has brought a new language to the discourse. Even some veteran women activists have said that this hectoring is disrespectful to our social norms. And some men who think they are sympathetic to women’s causes and can stand vocal women apparently can’t stand vocal women who are witty. It’s one thing for your authority to be challenged; it’s another to be mocked for being, you know, a man.

Pakistani men, right and left, have found a common cause against Aurat March. They invoke religion; they invoke tradition. Sometimes they invoke Prime Minister Benazir Bhutto as evidence that women in Pakistan get equal opportunities. They conveniently forget to say that Ms. Bhutto was assassinated in 2007 and her killers were never punished. That was as much a political assassination as a national-level honor killing.

The men in Pakistan who claim to stand guard over women are only standing guard for themselves. They don’t want to look for their own socks, and they don’t want to control that manly urge to take selfies of their private parts and send them to random women.

Mohammed Hanif is the author of the novels “A Case of Exploding Mangoes,” “Our Lady of Alice Bhatti” and “Red Birds.” He is a contributing opinion writer.

Original Headline: ‘How Do I Know Where Your Socks Are?’