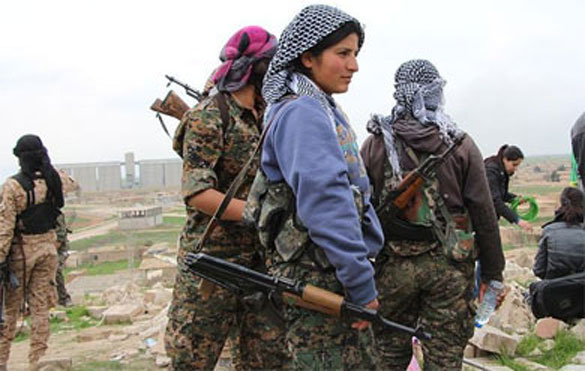 Two years ago this month, the Islamic State attacked the Yazidis, a Kurdish religious minority who live around Sinjar Mountain in Iraq. The militants came down on unprotected villages like Byron’s wolf on the fold, slaughtering the men and taking away thousands of women and children to be sold as sex slaves.

Any Yazidis who could escape fled higher into the mountains without food, adequate clothing or even, in some cases, shoes. They remained trapped there for days, in harsh conditions and with little international support. Those who had originally promised to protect them, the pesh merga soldiers of Masoud Barzani’s political party in Iraqi Kurdistan, had melted away in their hour of need.

It was Kurdish guerrillas from Syria and Turkey who eventually fought their way over the mountain through Islamic State territory, opening a corridor to bring Yazidi survivors to safety in the self-declared autonomous area of Syria called Rojava, the Kurdish word for west.

Many of these guerrillas were women, for a basic principle of the decades-long Kurdish liberation movement is that women cannot wait for others to defend them, but must themselves fight to be free. Indeed, some of these women say that they fight for other women, because they know what horrors await those captured by the Islamic State.

In Rojava’s war against the Islamic State, women can be found not only in the ranks but also in command of guerrilla units. After their rescue from Mount Sinjar, some Yazidi women decided to follow this example, and started their own militia, the Women’s Protection Unit-Shengal (another name for Sinjar). Similarly, in Iraqi Kurdistan, Yazidi women rescued from sexual slavery have formed their own brigade.

Though female guerrillas have fought in national liberation struggles in places from China to Vietnam, Cuba to Nicaragua, Mozambique, Angola, Iran and the Palestinian territories, mainstream global feminist organizations have tended to follow the lead of the Women’s International League for Peace and Freedom, founded during World War I, which holds that the solution to women’s victimization in wartime is, first, to oppose war and, second, to make sure women are at the negotiating table when wars end.

The Kurdish liberation movement’s approach, on the contrary, emphasizes self-defence in both military and social terms. Female guerrillas are meant to be seen as exemplars who show that female leadership is crucial in every sphere of society. In Rojava’s system of autonomous democracy (the area is within Syria’s borders), there are strong mandates for the participation of women in governance, and all organizations are led by both a man and a woman. Committees of women have real authority over problems like forced marriage and domestic violence.

But it is the female warrior in particular who offers a powerful counter image to that of the raped and dishonoured victim who is considered a source of shame to her family and community. Ancient, patriarchal ideas have made rape and sexual slavery a central strategy in genocidal conflicts, meant to destroy the very identity of the enemy. That’s how rape was used in Bosnia and the Democratic Republic of Congo (and earlier, in the partition of India and the liberation war of Bangladesh), and that’s how it is being used today in Iraq and Syria.

Women like the Yazidis who have been subjected to sexual violence on such a terrible scale cannot easily be reintegrated into old patterns, nor will they thrive if they are seen — and see themselves — as shamed victims. Part of the process of rehabilitation has to involve challenging the stigma survivors face.

Of course, there are ways to do this without taking up arms. But the fact that some of the survivors in the refugee camps of Iraqi Kurdistan, which is still heavily patriarchal, have chosen this path indicates the influence of the radical Kurdish female guerrillas. A women’s council formed last July by Rojava-influenced Yazidis went so far as to declare that the goal should not be to “buy back” abducted women and children, as is common when dealing with the Islamic State, but to liberate them and at the same time establish new traditions of self-defence.

That won’t be easy. Two years after their capture, thousands of Yazidi women and children remain in captivity. Many more are scattered in refugee camps in Turkey, Iraq or Rojava, while others have tried to flee to Europe, some drowning on the way. But the epicenter of the Yazidi struggle remains Sinjar Mountain, the ancestral home to which many now in Iraqi refugee camps desperately want to return.

One barrier in their way remains the same Iraqi Kurdish forces of Masoud Barzani who abandoned them two years ago, and whose Peshmerga have capriciously operated the checkpoint at the border crossing that leads to both Rojava and the north side of Sinjar Mountain, making adequate access to essential supplies and building materials difficult if not impossible. This has been done in cooperation with Turkey’s blockade of the Rojava Kurds.

Those of us moved by the plight of the Yazidis and the image of women fighting the Islamic State can, and should, do more than express admiration from afar. We need to help the American government listen to its own ideas about gender equality, democracy and pluralism. The United States recently promised Mr. Barzani’s forces a generous amount of military aid.

The price tag for that aid must be freedom of movement for the Yazidis, so they can return to their homes and rebuild, hopefully with full involvement by women and survivors of the Islamic State’s sexual violence, and a permanent end to the blockade of Rojava, whose guerrillas have been some of the only forces capable of fighting the Islamic State — not in spite of their feminism, but because of it.

Meredith Tax is the author of “A Road Unforeseen: Women Fight the Islamic State.”