Four Egyptian Women: Read Their Stories in Their Own Words

Four Egyptian women, four remarkably similar views about Egypt. Merna is a student, Hilda and Injy are graduates, and Yara is a teaching assistant at university in Cairo. They are in London for a week for a media training course with the Thomson Reuters Foundation. They’ve lived through the turbulence of the past few weeks and the instability of the past year of Muslim Brotherhood government. All are Muslim; two wear veils, two don’t. None is a Muslim Brotherhood supporter. 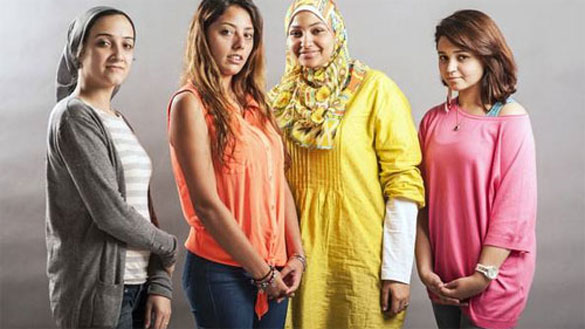 They are confident and articulate. These middle-class young women feel that the year of Brotherhood government was divisive for society, calamitous for the economy and bad for women. Three were abused for not wearing sufficiently Islamic dress during the past year and they attribute this not just to the Muslim Brotherhood, but to the collapse in law and order it presided over.

None is opposed to the intervention of the army after the popular uprising against the government of President Morsi, though one felt it went too far. All of them are instinctively against international interference in Egypt, including sanctions — something British ministers might reflect on.

To a greater or lesser extent they feel the portrayal of events in Egypt in the international press is one-sidedly against the military, at odds with popular opinion. Their views do not always get reflected in the reports of foreign correspondents or pundits, but they are representative of an awful lot of Egyptian women.

Here they are, in their words:

Before they came to power I read about the Muslim Brotherhood and what it stood for: previously members had been locked up. I found that every country where they’d had power was divided. I concluded that their main object is to divide and conquer.

Egypt has never been divided before into Sunnis versus Shias, Muslims versus Christians. In fact, my husband got shot in the original demonstrations against the Mubarak government, so you might suppose I’d be against the military, but once I read about the Brotherhood, I changed my perspective.

I now think, though my husband doesn’t, that he was probably shot by Hamas, acting to stir up the people. For the first time, in the past year, someone said to me: “What you’re wearing isn’t a hijab.” It was a woman in a hijab, in a club, who approached me all of a sudden. I’ve worn a veil since I was 13, my mother and sister are not veiled. It’s my decision — it’s between me and my God.

During the Muslim Brotherhood’s time in government, security collapsed. On my mum’s street, two guys had a car accident and one shot the other — that was the atmosphere. I don’t want the Brotherhood back — their supporters behaved in a rude, violent way. People who were against the Mubarak regime were saying we wish we had never left him.

The Muslim Brotherhood are trying to portray themselves as victims in the foreign media, calling for international interference — which wouldn’t be acceptable to most Egyptians — and al Jazeera is supporting them. Foreign journalists should be talking to the local media and local people, including people like my aunt and cousins who are in favour of Morsi coming back. But Egyptians are not divided between Christians and Muslims. The Muslim Brotherhood are not Egyptians as far as I’m concerned.

I didn’t want the Muslim Brotherhood taking power again. I thought we needed change — neither President Mubarak nor Morsi. We never used to fight over politics in Egypt but they have mixed religion and politics. There were suddenly problems between Christians and Muslims who’d lived together for years.

Women had a hard time in the first year [of the Morsi government]. On the first day he took power a man came up to me and said: “By the way, you have to wear the veil.”

And he said: “Now that Morsi is in charge, you have to wear the veil even if it’s not your wish.”

For the past year, we felt it wasn’t our country. I took part in the the demonstrations against the Mubarak regime and those against the Morsi government.

I know people who voted for Morsi — my father did — but he was in the demonstrations against the Brotherhood too. He never thought they’d change the country like they did in one year. The people following them are being brainwashed — they’re being told that if they don’t support them, they will go to hell.

In our constitution if enough people express the wish for the president to go, he has to leave. I think al Jazeera should be banned in Egypt. I’m for elections, but not with them. I’m 100 per cent against the international community getting involved. If the Brotherhood gets back in, it will be worse for women: they want to make Egypt like Saudi Arabia. Well, in Egypt women are different. We have Christian and Jewish women too … what are you going to do with them? We Egyptians have a very close bond between us.

I blame both the army and the Muslim Brotherhood for what’s happened. In the presidential election I chose Morsi. I didn’t want to support the old regime so I chose him for what he could offer us — but I was disappointed. A year with a lot of catastrophes isn’t acceptable; why should we accept it in Morsi’s case?

I was for the government’s removal but I was against the way it was done. It wasn’t that I was against the army getting involved; it was just the way their actions resulted in violence and death. The army’s role was to take the problems and find solutions but they didn’t. They went too far.

I wear a veil and no one bothered me when the Brotherhood was in government. But there was an increase in the harassment of women — and not because of the Muslim Brotherhood itself. There was a collapse of law and order — there wasn’t even security — and in that situation the extremists felt that they could do what they wanted. Egypt became a more lawless place.

I can’t say all members of the Muslim Brotherhood are bad — I have friends who support it. It’s the same with the military. I can’t say they’re all pro-violence. The international media is very one-sided [against the military]. They’re showing one side only: they should show both sides and give readers and viewers information so that they can decide for themselves.

I was definitely in favour of the overthrow of the Muslim Brotherhood. I’m against calling it a coup. It was more of a legal thing. According to the constitution, if we gathered enough petitions with enough support, the people are entitled to overthrow the government. But we couldn’t give the petitions we collected to the courts because they were pro-Morsi. The only institution to support us was the military. They intervened to do what the people wanted.

I tried to do what I could to support the protests against the government. I gathered signatures for the petition and I distributed them among my friends. I convinced my mum to sign. I tried to help as much as I could.

The last year was horrible. We live in a quiet, respectable area. But I was harrassed as a woman for the first time. I got verbal abuse and I was horrified to find that these people actually touched me. My fault was that I was not wearing the veil — these men were telling me that I am not a Muslim. They said, “What you’re doing is Haram [forbidden].” It was really annoying. When I walked home on the street at night, they’d say to me: “You’ll see what you’ll get in the next couple of years.” They want to transform us into Saudi Arabia. They don’t want our Egypt; they want a different Egypt. Security collapsed under the Morsi government. My mum’s car got stolen; that never happened before.

I don’t want Morsi’s release. People used to say about Mubarak that he didn’t know what was going on — things were done by others around him — but we still blamed him for his ignorance. So what about Morsi? We gave him one year and he made everything worse; how could we leave him in government? I hope for elections soon, with proper candidates. Last time it was disappointing. I don’t think the Brotherhood should take part in the election. People won’t support a party based on Islam — it doesn’t work. I feel resentment at the international media. The Americans are on the wrong side.