Prior to the inception of the "Aurat Azadi March," or the women's freedom march, International Women's Day on March 8 used to be a low-key event in Pakistan, mostly celebrated by different non-governmental organizations (NGOs) across the country. But it has now become a public event, in which thousands of women, rights activists and common people participate, thanks to the Aurat Azadi March organizers. 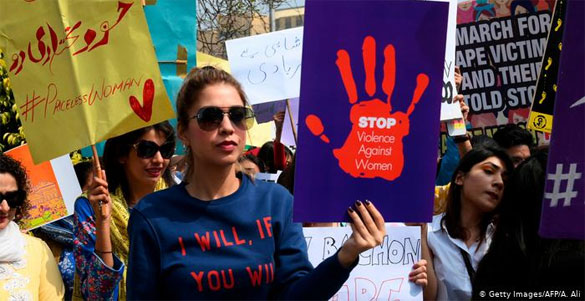 As the event grew bigger and gained strength, it also received more condemnation from conservative sections and groups. On mainstream and social media, people debate about the women's march, with many people – mostly men – calling it a "vulgar" event, funded by the West to spread secular values in the Islamic country.

The march organizers have drawn ire from religious groups for their slogan "my body, my choice," and have received open threats from conservative groups. Although this year's International Women's Day is not being commemorated on a large scale due to COVID-19 restrictions, the feminist movement in Pakistan faces enormous challenges in its fight for more freedom for the country's women. 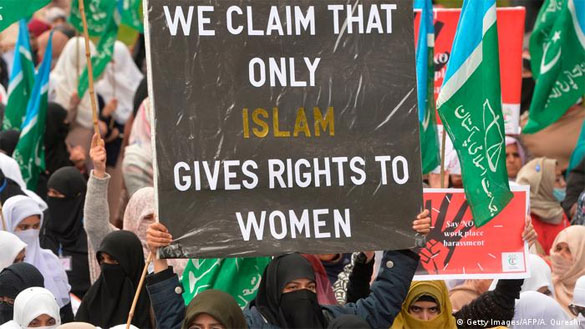 One of the biggest challenges comes from Prime Minister Imran Khan's populist government, which has unleashed a crackdown on NGOs. Authorities accuse women's rights groups of receiving foreign funds and promoting Western values in the country. In 2018, the Pakistan Tehreek-e-Insaf (PTI) government forcibly shut down 18 international NGOs.

"The Aurat Azadi March does not receive funding from any institution or company. We raise our own funds for the sake of our independence. The government wants to discredit the movement," Ismat Shahjahan, president of the Women Democratic Front, a coalition of women's rights groups, told DW.

"Feminism is a foreign concept and these women (women's rights activists) get funding from Europe and the US," Khalil-ur-Rehman Qamar, a writer and director who is known for his opposition to the women's march and the "my body, my choice" slogan, told DW. The 2019 women's march particularly angered the conservative people in Pakistan because of the placards that the event's participants used in their rallies. "Warm your own food," "My body is not your battleground," and "Oh, I am sorry. Does this hurt your male ego?" were some of the slogans that really irked them.

"If these women stop using these shameless and dirty slogans, I would be their biggest supporter. They should know that they can't get their rights by snatching them from men and disrespecting their fathers and husbands," Qamar said, adding that the feminists are "destroying this country."

Rights activists believe it is important to raise these slogans to challenge the status-quo in Pakistan, which remains one of the most dangerous countries in the world for women. According to the Journal Of Pakistan Medical Association, "approximately 70 to 90% of Pakistani women are subjected to various forms of domestic violence, including physical, mental and emotional abuse."

"When women talk about themselves, or their body, it offends everyone because a woman's body is considered a man's property," Tooba Syed, one of the organizers of the Aurat Azadi March, told DW.

Activist Shahjahan says that there have been "coordinated efforts" by the state, media and right-wing groups to "twist" the feminist narrative and discredit the movement.

For some years, religious groups in Pakistan have held their own events on International Women's Day to counter feminists.

Women wings of religious parties also organize the "Haya Day" (the day of piety) on March 8 to promote Islamic values about women. 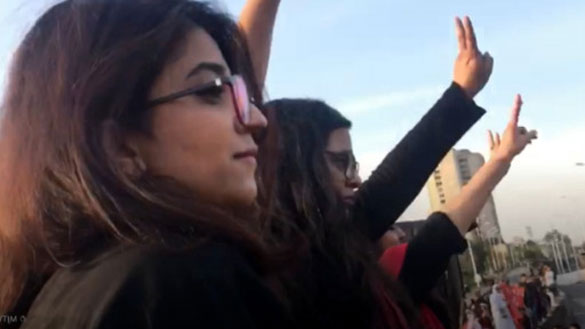 Samia Raheel Qazi of the right-wing Jamaat-e-Islami party says that men and women have their separate places and roles in Islam. She told DW that her party has been holding International Women's Day rallies since 1995, and that this year's theme will be "strong families build strong societies."

Shaheer Sialvi, a right-wing youth activist, told DW that religious groups will also hold a rally to honour Aafia Siddiqui, a Pakistani neuroscientist who was found guilty in 2010 by a New York court of trying to kill US servicemen in Afghanistan.

Rights activist Syed believes counter-rallies pose a security threat to their march. After last year's attack on the Aurat Azadi March participants, the organizers have taken measures to defend themselves, she said.

"As the government doesn't care about our safety and dignity, we have to protect ourselves," she said.

Source:  DW Made for Minds