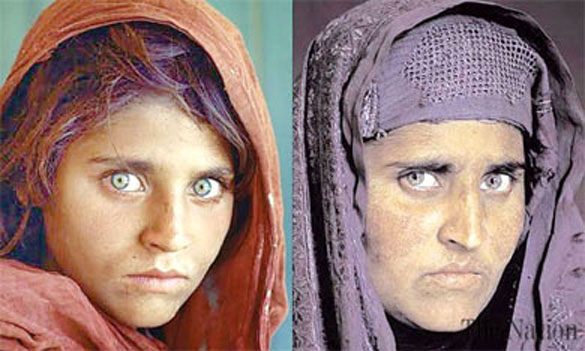 That photographer Steve McCurry went on to earn money, fame and awards, all thanks to his portrait of an Afghan refugee girl, Sharbat Gula, then a 12-year-old orphan languishing in a refugee camp near Peshawar, with piercing questions in her eyes, is a well-documented and a predictable story. Her gaze captured people’s undivided attention: perhaps it was the strange mishmash of hues in her pupils, her hungry-for-food candid look into McCurry’s lens, or the gaping hole in her Dupatta, but that 1985 cover of the National Geographic sold many copies, even becoming the most recognised image in the history of the magazine. The publishing house made money, the editors may have made their monthly salary and yearly bonus; everyone but Sharbat Gula benefitted from herself.

Gula continued to live her life untouched and unaware of her image having created ripples all around the world. She became the unofficial brand ambassador for charitable organisations in the west, who used her iconic image to gather funds for displaced people in the third world. Decades later, her face was also used by George W Bush’s administration to evoke support from the American people for the Afghan war.

Sharbat Gula is just one of the million faces on whose tragedy big media houses have thrived for years; war-stricken people provide regular fodder for awe-inspiring covers. Poor and outcaste folks make for great features but their condition, or that of their group, often remains unchanged and deplorable.

Take for instance, the Khawaja Sira (transgender) community of South Asia; English language newspapers of the region have from, time to time, carried painful, individual stories from the community, often liked and shared by thousands of their readers on social media. The Hijras (transgender) can still be found begging on the streets, prostituting their bodies in the shade of some dark alley on a Saturday night, and sobbing for social acceptance in the quiet of their rooms, even after years of being highlighted in media.

There are no follow-ups of the issue, hardly any remuneration offered, besides perhaps a couple of thousand rupees handed out as tip to the main subject of what is perceived to be a hot-selling story narrating someone’s plight. Most media bosses provide no rehabilitation to people who rake in big moolah for them. Sharbat Gula, the ‘Afghan Girl’ for the west, is still a refugee after so many years; she was arrested last week in Pakistan for forging her CNIC card. She perhaps only wanted to live peacefully, and go undetected in a country where she gave birth to her children.

Now in her mid 40s, Gula has spent most of her life trekking between the terrains of Afghanistan and Pakistan, playing hide and seek with the authorities. The photographer of her image will retire in a few years from a glorious career; the National Geographic even auctioned off the original image of “The Afghan Girl” cover for a whopping 147,000 dollars in 2002, making even more money off her. All proceeds were, of course, “directed towards preserving the archives and supporting aspiring photographers.” Anyone who could milk this superstar of poverty porn has done so; Gula lives in penury and without a country to call home.

Gula’s photographer would have upgraded his expensive lenses many more times than Gula would have bought herself new clothes or a new Burqa in her entire lifetime. The biggest crime in the world is not murder, it is being born poor; that gives others a lifetime licence to exploit the unfortunates’ ones. They say wars are necessary to keep the arms industry in production; it wouldn’t be too inappropriate then to comment that the by-products of war, its emotional casualties, benefits media the most. Once considered a noble profession, media has now become an exercise in sheer dishonesty and muting of the conscience. It utilises downtrodden subjects in the same manner as a zookeeper shows off the new additions to his animal kingdom: you can see but not touch. The keys of the cage belong to the publishing house or the news channel that got there first.

Photographer Steve McCurry shot not one but two best-selling covers with Sharbat Gula. In 2002, more than 15 years after the first cover, McCurry along with his team went searching for his Afghan girl, and managed to trace and identify her with the help of iris mapping. The National Geographic was once again too happy to report on the impecunious life of their beloved Afghan star, and thereafter, they left her right there to suffer more. After her recent arrest, McCurry wrote a long social media post about wanting to help Gula legally and financially. Not impressive enough, why didn’t the thought of uplifting her life occur to him earlier? Maybe a third cover with Sharbat Gula is what he is aiming for.

The Afghan girl may be out on bail by the time this piece goes into publication, but that does not bail out the National Geographic and Steve McCurry from their moral responsibility towards her. Pakistan should also seriously consider absorbing refugees like Gula and others on grounds of compassion. After all, many Pakistani citizens have committed ‘crimes’ similar to hers in the west; remember the paper-marriage phenomenon that died only recently? Wanting to escape an unlucky situation at home is a just and humanly desire; life as a refugee is neither fun nor worry-free.

In 1993, another picture shook up the world; titled “The Vulture and The Little Girl,” it was a disturbing shot from the famine affecting Sudan at that point of time. The haunting composition had a starving girl inching towards a pile of food with a vulture landing right behind her, eyeing her as his meal. The picture won its photographer Kevin Carter the Pulitzer Prize; he became a seasoned war photojournalist after that, clicking dying victims of the third world from a close angle. In 1994, in a shocking move, Carter committed suicide, leaving behind a note that said: “I am haunted by the vivid memories of killings and corpses and anger and pain...of starving or wounded children... of trigger happy madmen.” At least, once upon a time, there lived amongst us a photographer with a conscience.

Maria Sartaj is a freelance columnist with a degree in Cultural Studies and a passion for social observation, especially all things South Asian.