We All Need To Embrace Our Own Heroes: Aap Ko Malala Mubarak Ho…

Exactly 10 days ago today, I woke up to a text from a close friend saying, “Aap ko Mubarak ho”, after a quick mental tally confirming my lack of significant accomplishments of late, I responded by asking, ‘Kis liye?’ and he answered, ‘Actually, hum sab ko Mubarak ho’.

It was a cryptic enough exchange for me to switch on the television to a series of television programs on Malala Yousafzai winning the Nobel Peace prize, alongside Indian children’s rights activist Kailash Satyarthi. I felt overjoyed and apprehensive simultaneously. 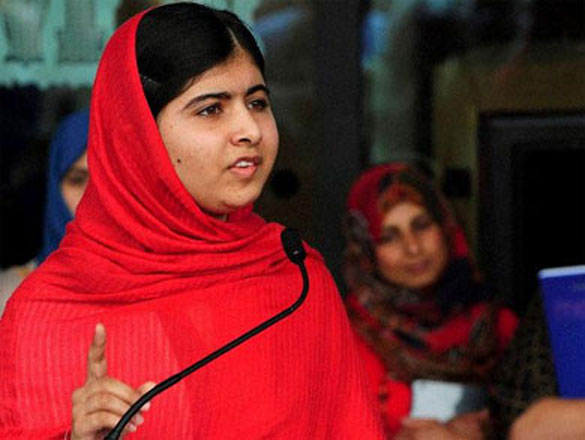 I have effectively spent the next 10 days holding off on writing about Malala, purely for the reason that I wanted to be aware of all the conspiracy theories, assorted criticisms and public retractions to fill the void of ‘good news’ that Pakistan is perpetually starved of.

Especially when it is packaged in a ‘too good to be true’ bundle of a confident, brave, outspoken young girl.

I remember asking my students about Malala and while nearly all of them were appreciative of her efforts, there were sceptics who still questioned, ‘Who was using her? What did this all mean? Was it a political move? Edhi was definitely the better candidate.’

All the usual suspects have been explored by a legion of local and international analysts alike.

The fact of the matter is that traditionally we have not really been too kind to our Nobel laureates. The only other Pakistani to have won the Nobel Prize, Abdus Salam was driven out of the country on the premise of religion … or more aptly put religiosity.

Some might say, history has a way of repeating itself. Malala has been driven out of Pakistan as a slightly varied result of the same extremism.

It is an interesting corollary to observe the rise of both Malala and Fazlullah in and outside of Pakistan.

One was shot and became the ‘West’s darling’ still stubbornly advocating her and every child’s right to education touting, ‘one child, one teacher, one book and one person can change the world’ and many would say she is living proof of each one of those claims.

The other, the infamous ‘Mullah Radio’, who created both the space and the campaign that led to Malala getting shot, is currently the leader of the Tehreek-e-Taliban Pakistan. One might say that his rise has also been equally meteoric.

Pakistanis, as usual, find themselves uncomfortably wedged between the two poles of ideologies personified by each.

It should be obvious which one we need to pick but it is never that simple.

For all those advocating Edhi’s nomination for the prize, I ask, what are the guarantee’s we won’t demonise him the moment he is tapped? After all, isn’t the prize ‘worthless capitulation to the West’ anyway?

How much time would it take for Pakistanis to colour, even the likes of Edhi, with our conspiracy brush?

I recall asking my class how much it really mattered if Malala had been supposedly ‘co-opted’ by the West and its media.

Did it change the power of her message of education? Is Pakistan really so far gone along the reactionary tangent that it cannot support the only cause that might secure its future, if that cause also happens to align with Western interests? Can we not admit to and promote the fact that the entire world stands for children’s education, as does Islam – is that really a complex issue?

If anything, it is perversely simple to support Malala and what she stands for.

I personally believe that is why so many people look for shadows and puppet masters when it comes to Malala. Pakistanis know better than most that ‘nothing is that simple’, we have lost the ability to take people, causes and messages at face value.

There is obviously also the question of timing. Malala and Satyarthi’s prize comes at a time when border skirmishes between India and Pakistan are at a pinnacle, and rhetoric between both countries keeps alternating between aggressive to outright hostile daily.

Was the prize a political move to both divert and deflect attention? Perhaps. Again, is that such a bad thing?

Everyone on both sides of the border knows that Pakistan and India’s volatile status quo isn’t going anywhere until the Kashmir issue is resolved. Given that understanding, is any attempt to build an alternative line of communication through ‘peace ambassadors’ such as Malala and Satyarthi not an unconditionally positive step? Does working on education and child labour issues really need to be viewed through the same lens that colours everything else?

This Nobel Peace nomination reinstates some of the legitimacy of the prize itself: to my knowledge, neither of the present nominees have drafted kill lists or plan on launching drone strikes anytime soon.

In my class, our discussion moved frequently from Malala to her father Ziauddin Yousafzai. In light of a recent UN #HeForShe campaign one of my students remarked that Ziauddin was probably the best and most relatable advocate of the campaign, without needing to be subsumed by the media hype and packaging.

He is the one who has allowed Malala to be herself in a part of Pakistan, where simply being a girl is often struggle enough. He is the force that stands besides her beaming with pride. Malala echoes her father’s novel approach to what men and women can and can’t do when she says things like,

“My mother is now learning English, becoming independent, goes to see the doctor on her own, goes to the shops and markets on her own. On the other hand, my father is now going towards the kitchen. He makes eggs. He cannot really do a lot of cooking, but he brings plates to the table, brings cups, puts jam and butter in those things. So he is getting better.”

This, is the family dynamic that encourages hope for all Pakistanis regardless of ‘class’ and ‘elitism’. It ought to be universal. Ziauddin echoes it when he speaks about his daughter in a TedX video, saying that his daughter is not extraordinary because of him but rather despite him:

An American friend of mine recently asked me, “I just don’t get it: you have a girl who was shot by the Taliban for wanting to go to school. How can you guys not get behind that, no matter who’s supporting her or how?”

And so here I am, 10 days later, trying to say that we all need to embrace our own heroes. If Pakistan could stand behind Malala without reservation, there would be no space for her to be ‘co-opted’, so to speak.

It’s about time we stopped disowning the very few people who seem determined to work for this country, in spite of its treatment of them.

Maria Amir is a journalist-turned-teacher. She has an MSt in Women’s Studies from Oxford University and currently teaches Media Writing, Writing and Communication and Gender at LUMS.