Muslim Women: Beneath Burqa, a Mangalsutra and Chooda

As Burqa-clad Sumaira walks past the streets of Jama Masjid, there's nothing really striking about her. That's until she flashes the bright red bangles she's wearing — the kind that newly married Hindu women have around their wrists.

Young Muslim women in India, and even Pakistan, can be increasingly seen sporting the Chooda, Mangalsutra and often the Sindoor. And they see no taboo in it, taking it as a fashion statement, something that adds to their 'just married' look. 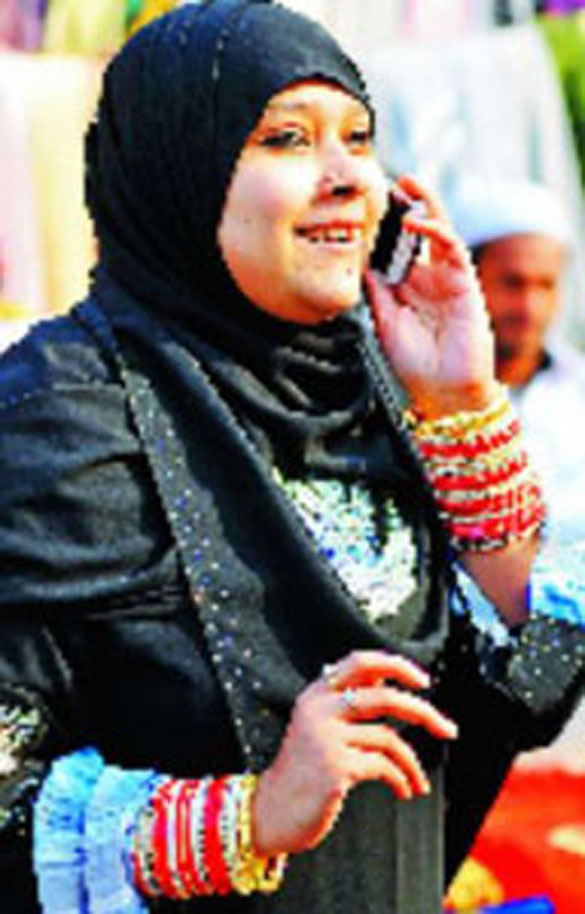 ''Wearing a Chooda doesn't make me a Hindu or a lesser Muslim," says 21-year-old Sumaira. "See, among Muslims there is nothing that differentiates married women from those who are still single. I have been fascinated with Choodas ever since I was a kid. So that was one of the first things I bought after my engagement. In fact, my cousin Saima, too, wore one at her Nikah." So did Huda Ahmad, also from the Jama Masjid area here, when she got married last week. To her surprise, none of her relatives objected.

It's not only the Chooda. The demand for Mangalsutras is picking up, and not just in India but also in Pakistan where many of those who ask for it attribute it to the influence of India's enormously popular Saas-Bahu soaps.

Two years ago, when Naseema Aziz, a resident of Karachi, visited her relatives in Delhi they were startled to see her buy seven diamond-studded Mangalsutras from Karol Bagh. "Mangalsutra is a beautiful neckpiece and goes with every suit," Naseema explained over phone.

"If one is wearing it out of choice, there's nothing wrong in it. In Pakistan everyone knows I am a Muslim. Merely wearing a Mangalsutra won't have me confused for a Hindu."

Jewellers in Delhi confirm this trend. "In the past two-three years, we have seen a growing number of Muslim women, some in Burqas, ask for the Mangalsutra," says Ankit Kohli, owner of Raj Jewellers. "They prefer the ones that have diamond pendants."

With the Mangalsutra and Chooda finding favour among Muslim women, how can the Sindoor, that eternal sign of a married Hindu girl, be left behind? But while most Hindu women prefer red Sindoor, Muslims tend to go for orange. Interestingly, in parts of Kolkata the two different shades have come to distinguish women from the two communities.

Rizwana, who works as a nanny in Kolkata, has seen her mother with orange Sindoor. She followed suit when she herself got married in 2010. "Hindu women use red and we orange. Don't women in Delhi do the same?" the 24-year-old asked. In Bihar, however, many Hindu women also use orange Sindoor.

This confluence of cultures can these days be witnessed during Muslim weddings too. Some of them come complete with what resembles the Sangeet ceremony.

Omar's wedding in Delhi is on February 23 and he's busy not just with his shopping but frenetic dance rehearsals. "Though the wedding is on the 23rd, the Nikah will take place on the 10th. And there is a Sangeet-cum-Mehendi function with dance performances by relatives and friends. Both Hina, my fiancee, and I will be performing," says the excited man.

When asked why the Nikah was being held before the functions, he says, "If we perform together before the Nikah, some of our elderly relatives might not like it that the girl and boy are dancing away without even getting formally hitched."