The Mean Girls of Afghanistan 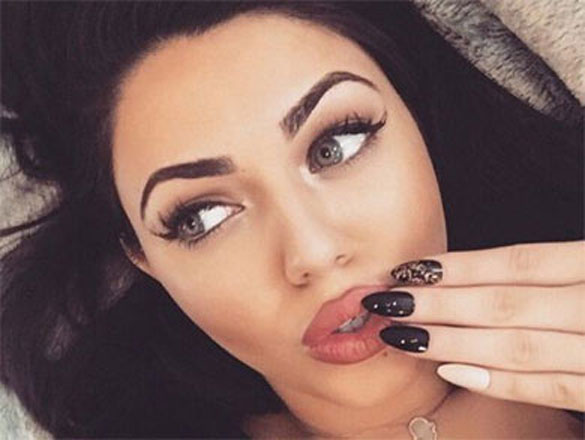 I began to understand why Durrani may have tucked her Afghan ID under the Persian rug. Photo: Instagram

Recently, Afghan Americans tuned in to see the Instagram famous Afghan girl, Durrani Popal, an employee of DASH, the infamous clothing store owned by the Kardashian sisters. In the slew of Insta-famous-for-nothing girls, Durrani was given special attention from our community, for the sole fact that she was an Afghan, beautiful, and works for the Kardashians.

There are only a handful of fashion and makeup Afghan gurus, and with her big beautiful blue eyes and amazing fashion sense, it’s easy to see why Afghan Americans were eager for her to shed positive light on her ethnic background. We all waited for her to mention her roots. It would be great to have a beautiful Afghan girl working in the fashion and entertainment industry representing us, showing the world that Afghan women do not always need saving, and can achieve non-traditional career roles.

But instead what we saw was no mention of Afghanistan. Rather, we were given every ‘allusion’ that she was Iranian – mentions of Ghormeh Sabzi and Farsi class, her fondness of Iranian men, and an introduction to her Persian Jewish boyfriend. She and her Iranian co-worker and roommate, Nazy Farnoosh, spoke of their close friendship because of their similar backgrounds, but again, there was no distinction made between Nazy being Iranian and Durrani being Afghan. It almost seemed as if Durrani was hiding being Afghan, and trying to pass off as Iranian – a community already introduced to reality TV through shows like Shahs of Sunset, and other notable reality stars.

Naturally, I was annoyed. For Afghans, we knew who she was. The names ‘Durrani’ and ‘Popal’ are not Iranian; they are uniquely Afghan/Pakhtun names, and quite popular ones at that. The Durrani Empire spanned all of Pakistan, Afghanistan, and parts of Iran, and its ruler, Ahmad Shah Durrani is considered the founder of the modern Afghan state. Furthermore, ‘Popal’ from the longer name ‘Popalzai’ is a huge Pakhtun tribe of Durrani descent. Therefore, both her names scream Afghan, and are very patriotic, to say the least.

To an outsider, she can be confused for Iranian; Afghans look Iranian, speak the language and share the religion.

Social media conversations mirrored my confusion. Why was she hiding her ethnicity? What’s wrong with being Afghan? Why are you trying to blend in with the Iranians so bad?

However, Durrani quickly clarified on her Twitter account that she gets confused for Iranian, but is in fact, Afghan.

Interested if other Afghans felt the same way, I posted a Facebook status expressing my impatience and dismay with Afghan girls passing off as Iranians. My issue arises when Afghan girls are benefitting from their exotic looks but making every effort to hide their roots.

But quickly I realised why Durrani may be turning the cheek to our people.

Almost as soon as I posted it, a slew of negative comments followed, attacking her character, love and life decisions, clothing choices and even her mannerisms. She was name-called and her intelligence was questioned, and she was scolded for being a ‘bad’ Afghan and Muslim.

Woah. This wasn’t a community I’d be proud of. I was taken aback by how mean some of the comments were:

“We don’t want her to say she’s Afghan.”

Upon visiting her Instagram page, I saw identical comments under her photos, scolding her for her actions on the show and expressing dismay that she did not clearly state her ethnicity. She was repeatedly called a ‘b****’, ‘s**t’, ‘w***e’, and every other derogatory phrase under the sun. And these comments came mostly from Afghans.

That’s when it dawned on me, why say you’re Afghan? We’re not a welcoming and loving community anyway. We judge you on everything.

I myself have been on the other side, poked and prodded for my skirts or my makeup or my friends or my mannerisms and even this blog. I began to ask myself, are we an inclusive community? Why are people measuring ‘Afghan-ness’ and how can we pretend to be good pious Muslims if we’re judging girls left and right? Is there a barometer to being Afghan?

Yes, because being an Afghan girl is like being in a sorority. Follow the rules, or you can’t sit with us. Either please the big sister, or get kicked out. You can wear short skirts, but not too short. You can date a guy or two, but not a Jew on national TV. You can pursue fashion, but not under Kim Kardashian because she’s a sex-tape phenomenon.

I began to understand why Durrani may have tucked her Afghan ID under the Persian rug. I realised that I myself was judging her and felt horrible – how many times have people seen me and thought the same things? When your every move is being monitored under a ghayrat (pride) microscope, why not just give up? The community won’t accept you – so why accept them?

As a community, and I am including myself here, we have a huge problem with judging our daughters. There is a tremendous double standard between our boys and girls. And this double standard is seeping into the way our community is being represented in the media. Just the other day, I posted an invite to a pre-screening of Rock the Kasbah, a film directed by Barry Levinson, written by Mitch Glazer, and starring Bill Murray that takes place in Afghanistan. A number of people expressed their dismay that a Palestinian woman, and not an Afghan, played the lead role. Well obviously. Since when did an Afghan mom or dad say,

“Yes bachem, go ahead and enrol in acting classes and wear spaghetti straps and get your headshots taken and fly to Hollywood.”

How are you going to get mad that we don’t have mainstream actors when Durrani Popal can’t even play herself on a reality show?

And this isn’t the first time an Afghan woman has been measured on the Afghan barometer. Aryana Sayeed, an Afghan pop singer, is constantly getting threats of rape and murder for wearing tight clothing during her performances.

Vida Samadzai, Miss Afghanistan 2003, was condemned by the Afghan Supreme Court and called a ‘w***e’, a ‘s**t’, a shame to our community for wearing a red bikini in an international pageant.

The irony of this all is that a lot of those criticising our sisters are the same people who say they’re non-judgmental Muslims. A big part of Islam and practicing the religion is being a humble and loving individual, and to worry about your own soul rather than the shortcomings of others. ‘Pious’ Muslims and Muslimahs post Islamic quotes stated by Prophet Muhammad (PBUH) along the lines that no one with the slightest pinch of arrogance will be able to enter Paradise, but they are the first ones to partake in bashing girls from our community that may not practice the religion as diligently, or as outwardly.

At the same time, however, I firmly believe that if you are a person of some importance, and have the ability to sway or influence people’s opinions about our community, then do so. If you were raised as an Afghan and as a Muslim, then it would be fair and commendable that one not bash their background or perpetuate stereotypes about our people. Either gung-ho represent, or don’t at all, because we get enough slack in the media. I don’t appreciate people using their platforms to belittle our community and make it seem like we’re all small-minded haters who are all snarky and judgy, because clearly my existence proves we’re not.

My family is an anecdotal piece of evidence that no, not all Afghans will ‘disown’ you for dating a Jew (on the contrary, my mom has always encouraged me to do so, ‘because you’ll be rich’ – joking of course). My parents have never told me who I can and cannot marry – only that they be good people. I literally have in-laws who are Iranian, Armenian, Sri Lankan, Mexican, and white. I couldn’t and still cannot relate to some of the things that Durrani was saying, like she went to a “Farsi school” where she would get hit, or that she would get disowned for her relationship with a Jew.

In my experience, it is Jews who are more exclusive about marrying within their community than Muslims. My family is not anything like what Durrani described hers to be, and so I felt defensive that they may get painted in such a light. I felt she was selling the same image of Muslims that is constantly sold, and wished more positive light was shed.

But if that was her experience, then I cannot impose mine. At the end of the day, I am immensely proud of being Afghan, but only because I learned to turn my cheek to ignorant individuals who say I’m a ‘w***e’ for wearing a bikini and focused my energy on the multitude of positives in my culture. Just because Durrani may not do so, doesn’t mean I get to smack-talk her for it. So be it.

So for all the other Durranis out there, I’m sorry your identity is being compromised because of your choices. I’m sorry you can’t sit with us because you’re not like us. I’m sorry your every move will be scrutinised and criticised and we will push you away because you don’t act the way we want you to. I’m sorry you can’t proudly say you’re Afghan without someone robbing you of your identity because you’re not “Afghan enough” for them. I didn’t know there were levels to this. I thought you were just born Afghan, I wasn’t aware there was an interview and hiring process. Last time I checked, no one could choose their ethnic background, besides Rachel Dolezal and we saw how that turned out.

Until the Afghan community learns to love and embrace each child as their own, regardless of their personal choices, we’ll continue to have pretending Persians.

A verse from the Holy Quran states that one should not spy on each other, as it is considered a sin in some cases, and should not back bite either. (Chapter 49, Surah Hujurat, verse 12)

I use Islamic quotes not to support bad behaviour, but rather to support people not judging one another as a whole.

A first-generation Afghan-American living in Los Angeles. With a degree in Political Science and a concentration in the Middle East, her blog covers politics, cultural taboos, and identity reconciliation. She tweets @madinahhh (twitter.com/madinahhh)