Sift Grain from Chaff: The Truth about Triple Talaq 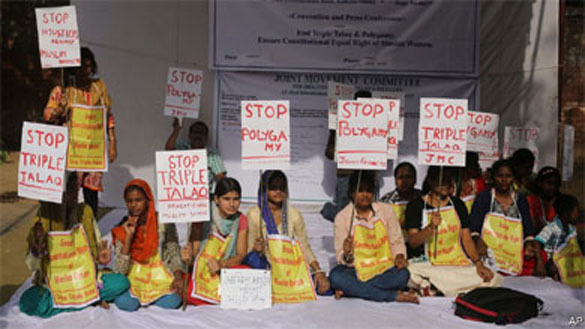 Islam invested the marriage with firm underpinnings in order to ensure stability of the relationship.

The issue of triple Talaq (divorce), a practice resorted to by some Muslim men to revoke their marriage, is currently engaging national attention. A Constitution bench of the Supreme Court has taken up the issue to judge its legal validity. Its scriptural roots are getting scrutinized and underlying ethical basis being debated.

Islamic law was the first to recognize the necessity of legally invalidating marriages that weren’t working. Much against the norms prevailing in medieval times where women were considered property of men and marriage a sacrament, Islamic Sharia recognized the man and woman as equal partners. The marriage itself was declared a contract. Islam invested the marriage with firm underpinnings in order to ensure stability of the relationship. Couples were advised to have mutual love (Mawada) and kindness (Rahmah) as two pillars of a durable partnership. Women were given right to Mehr (dower) and men were held the custodians of children. These were intended to keep the marriage going. Yet possibility of its revocation in the wake of maladjustment or incompatibility was not overlooked. Hence, divorce or Talaq was provided as an instrument to end an inharmonious marriage even while clarifying that Talaq was the most despicable among the permissible actions in the sight of God.

The Quran, the principal source of Islamic law and guidance, sets out an elaborate procedure for annulment of a marriage. It enjoins the couples locked in a defunct marriage to sort out differences with mutual consultation. Further on, it directs them to bring in elders to arbitrate affairs if the husband and the wife fail to resolve it among themselves. It then allows the husband to pronounce ‘Talaq’ twice with an intervening period of three Tuhr (menstrual cycle). These are revocable. This was advised in order to provide the contending couples time to cool off and try for rapprochement. The third Talaq was allowed after yet another period of Tuhr which was irrevocable. The elaborate process was laid down in order to ensure continuity of a relationship that comes with a lot of emotional, biological, social and financial baggage.

But as conquests brought a variety of people, lands, cultures and social customs under the wide swath of an Islamic empire, jurists began to give out rulings as per exigencies of the time and society. Customs and laws mingled and merged. Practices did not always follow the legal theory. Battles and trade enhanced the mobility of the people. Under constant pressure, jurists began to validate three Talaq as a firm annulment of the marriage. What was designated as a process got reduced to an event.

Theological history testifies to the fact that a number of Muslim jurists have though dubbed the three Talaq ‘sinful’, and ‘despicable’, consider it valid resulting in final repudiation of marriage. Some sources even attribute its irrevocable nature to a ruling from the second caliph Hazrat Umar. Yet another set of theologians doubt the veracity of the claims that it has found favour from founders of all the four major jurisprudential schools i.e., Hanafi, Maliki, Shafii and Hanbali. However, the sects like the Shias and the Ahle Hadith reject the practice and do not consider the three Talaq uttered in a single sitting to be valid ground for repealing of marriage. They insist upon utterances to be spaced out by around 40 days. They argue that the concept of invalidation of the marriage with three rapid-fire Talaq does not conform to the Quranic term for Nikah (marriage) which has been described by the Holy Quran as Misaqan Ghaliza or ‘firm bond’. Curiously, Muslim men among followers of Hanafi school—overwhelming majority of Muslims in India being so—who regret their use of three Talaq, approach the Ahle Hadith mosques or family court to rejoin their wives.

All that the debate and discourse over the issue has done till now is to convince the general Muslim masses of three Talaq having no Quranic sanction and there being no legitimacy for unilateral and arbitrary wielding of the tool. If the Quran is to be any guide, a reconciliation attempt must precede Talaq. Similarly, the women too could initiate proceeding for annulment of the marriage through another instrument called Khulaa.

The dawn of colonialism and advent of liberal thought ensured that the controversial nature of the issue would pop up every time the life of a woman was rendered miserable either due to whimsical use of the instrument or a ruling by a community court or Panchayat where woman’s side was insufficiently heard. There have been instances wherein Talaq was conveyed by telephone, SMS, WhatsApp or ordinary letter and were considered sufficient for invalidation of the marriage. Often the men were in an inebriated state or did so in a fit of anger.

Media has been selective in highlighting them. Liberals and feminist groups have found this to be utter mockery of the Shariat and dubbed it antithetical to the Quranic principle of fairness and justice. Pleading against continuance of this practice inter alia and legitimacy it has come to acquire among clerics, Shayera Banu from Uttarakhand who is one such divorcee, has taken the matter to the Supreme Court.

The All India Muslim Personal Law Board, founded in 1972 amid stirring over Uniform Civil Code, has been leading the opposition against any kind of interference in the Muslim Personal Law. The Board, an NGO, shot into prominence over Shah Bano case (during 1984-86) when the Rajiv Gandhi Government brought in a legislation to undo a ruling by the apex court over the issue of alimony to a Muslim divorcee. But it is criticized for doing little to bring about awareness against the abhorrent practice within the community. Leading jurists, be they Muslims or otherwise, argue that any judicial ban is not the way to any meaningful reform and cite the cases of bigamy still being practiced among Hindus despite a legal ban. For reforms to be popular, it is argued, they must come from within, not without.

But the majority of Muslim countries have brought in reforms. Legislation has aligned the procedure of Talaq along the Quranic principles of divorce where it can only be a negotiated dissolution, not a unilateral and arbitrary one.

M.A. Siraj is a Bengaluru-based journalist